LHCb presented a measurement of the masses of two charmonium particles, with a precision that is unprecedented at a collider for this type of particle 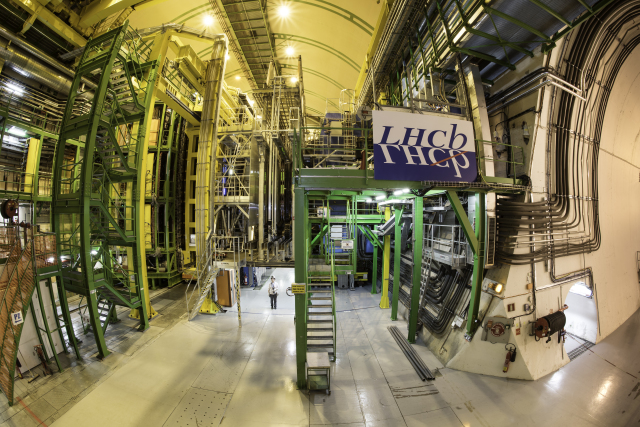 Today, the LHCb experiment at CERN presented a measurement of the masses of two particular particles with a precision that is unprecedented at a hadron collider. Until now, the precise study of these “charmonium” particles, invaluable source of insights into the subatomic world, required dedicated experiments to be built.

The two particles, χc1 and χc2, are excited states of a better-known particle called J/ψ. An excited state is a particle that has a higher internal energy, namely a mass, than the absolute minimum configuration which is allowed. The J/ψ meson and its excited states, also referred to as charmonium, are formed by a charm quark and its antimatter correspondent, a charm antiquark, bound together by the strong nuclear force. The J/ψ revolutionary observation in November 1974 triggered rapid changes in high-energy physics at the time, and earned its discoverers the Nobel Prize in physics. Just like ordinary atoms, a meson can be observed in excited states where the two quarks move around each other in different configurations, and because of Einstein’s famous equivalence of energy and mass, after a tiny amount of time they can disappear and transform into some other particles of lower masses. The LHCb experiment studied, for the first time, the particular transformation of χc1 and χc2 mesons decaying into a J/ψ particle and a pair of muons in order to determine some of their properties very precisely.

Previous studies of χc1 and χc2 at particle colliders have exploited another type of decay of these particles, featuring a photon in the final state instead of a pair of muons. However, measuring the energy of a photon is experimentally very challenging in the harsh environment of a hadron collider. Owing to the specialised capabilities of the LHCb detector in measuring trajectories and properties of charged particles like muons, and exploiting the large dataset accumulated during the first and second runs of the LHC up to the end of 2016, it was possible to observe the two excited particles with an excellent mass resolution. Exploiting this novel decay with two muons in the final state, the new measurements of χc1 and χc2 masses and natural widths have a similar precision and are in good agreement with those obtained at previous dedicated experiments that were built with a specific experimental approach very different from that in use at colliders.

“Not only are we no longer obliged to resort to purpose-built experiments for such studies,” continues Passaleva, “but also, in the near future, we will be able to think about applying a similar approach for the study of a similar class of particles, known as bottomonium, where charm quarks are replaced with beauty quarks.” These new measurements, along with future updates with larger datasets of collisions accumulated at the LHC, will allow new, stringent tests of the predictions of quantum chromodynamics (QCD), which is the theory that describes the behaviour of the strong nuclear force, contributing to the challenge of fully understanding the elusive features of this fundamental interaction of nature.