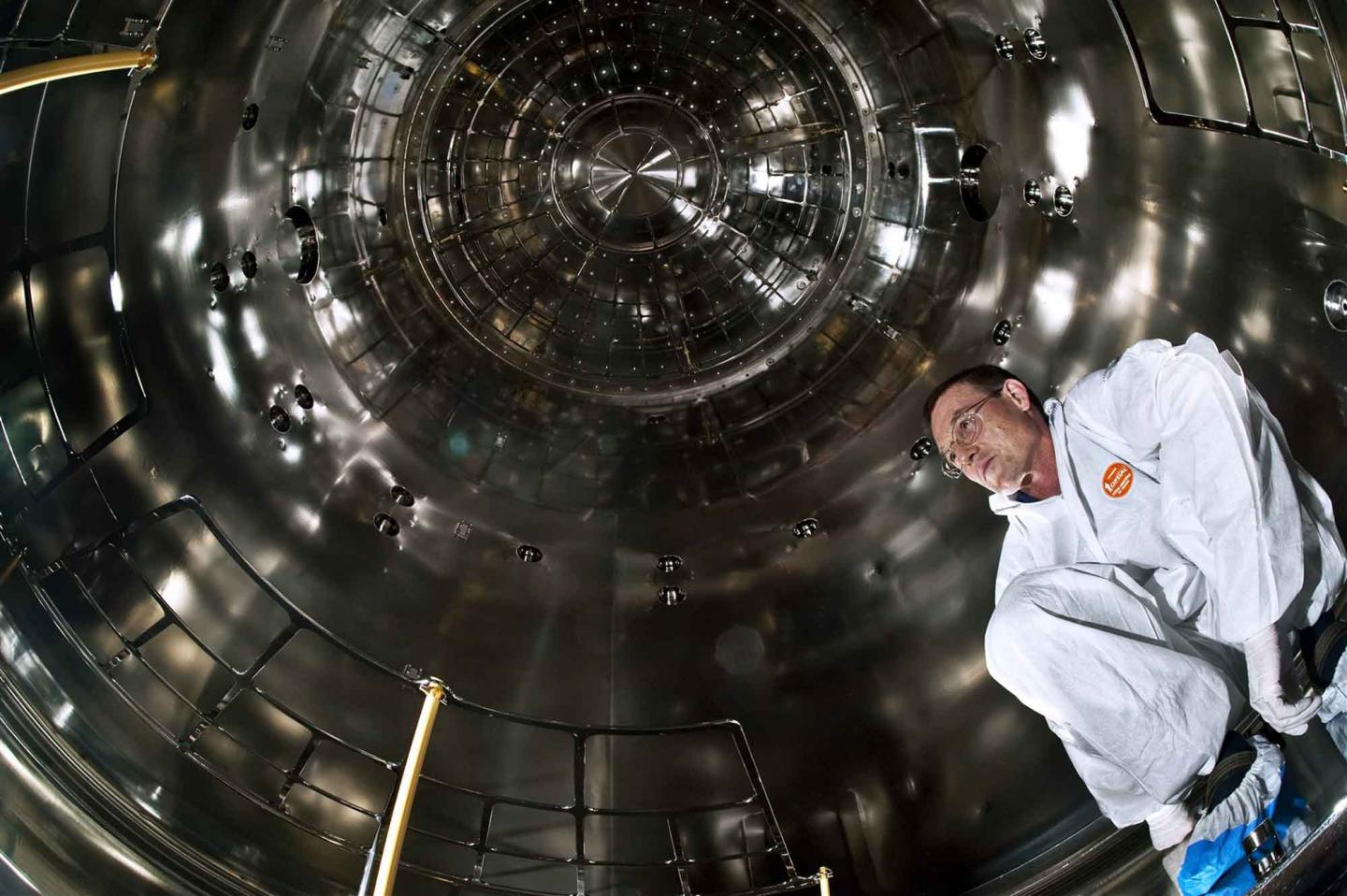 Jasper Kirkby of the CLOUD collaboration sits inside the CLOUD chamber at CERN (Image: Maximilien Brice/CERN)

The CLOUD collaboration has published results in Nature that show that amines – atmospheric vapours closely related to ammonia – combine with sulphuric acid to form highly stable aerosol particles at rates similar to those observed in the atmosphere. The collaboration has found that typical atmospheric concentrations of only a few amine molecules per trillion air molecules are sufficient for rapid particle production.

Increases of atmospheric aerosol particles cool the planet by reflecting sunlight and by forming smaller but more numerous cloud droplets, which makes clouds brighter and longer-lasting. According to current estimates, about half of all cloud drops are formed on aerosol particles that were ‘nucleated’ from trace atmospheric vapours rather than being directly emitted from Earth’s surface, like sea spray particles. Despite its importance for climate, atmospheric particle nucleation is poorly understood – and even the vapours involved are not yet established.

The team chose to study amines because they are known to form strong chemical bonds with sulphuric acid and their presence might help stabilize embryonic sulphuric acid clusters against evaporation, allowing new aerosol particles to form. Amines arise from human activities – primarily animal husbandry such as cattle – and also from natural sources. Amines are responsible for the familiar odours emanating from the decomposition of organic matter that contains proteins. For example, the smell of rotten fish is due to trimethylamine.

Using CERN know-how, the CLOUD chamber has achieved much lower concentrations of contaminants than all previous experiments, allowing the collaboration to measure nucleation due to controlled amounts of selected trace gases without the complicating effect of unwanted gases.  State-of-the‐art instruments connected to the CLOUD chamber measure extremely low concentrations of atmospheric vapours and the molecular makeup and growth of newly‐formed molecular clusters from single molecules up to stable aerosol particles.

Another unique feature of CLOUD is the capability to measure nucleation enhanced by cosmic rays at intensities between ground level and (using a CERN pion beam) the top of the atmosphere – or with the effects of all ionisation completely suppressed by an internal electric field. The CLOUD results show that cosmic ray ionisation has only a small effect on the formation rate of amine-sulphuric acid particles but they don’t rule out more significant effects if sulphuric acid particles nucleate with other vapours in the lower atmosphere.

The CLOUD collaboration has made the first ever measurements – either in the laboratory or in the atmosphere – of the formation rates of atmospheric aerosol particles that have been identified with clusters of precisely-known molecular composition. The precise laboratory measurements have allowed the authors to develop a fundamental understanding of the nucleation process at a molecular level. The scientists can even reproduce their experimental results using quantum chemical calculations of molecular clustering.

No-one expected that the formation rate of aerosol particles in the lower atmosphere would be so sensitive to amines. A major fraction of amines in the atmosphere arise from human activities, but they have not been considered so far by the Intergovernmental Panel on Climate Change (IPCC) in their climate assessments. The CLOUD experiment has therefore revealed an important new mechanism that could contribute to a presently unaccounted cooling effect. This will need to be considered in future by the IPCC when assessing the impact of human activities on past and future climate. In particular, amine emissions from human activities are expected to increase. Amine scrubbing is likely to become the dominant technology to capture carbon dioxide from fossil-fuel power plants.