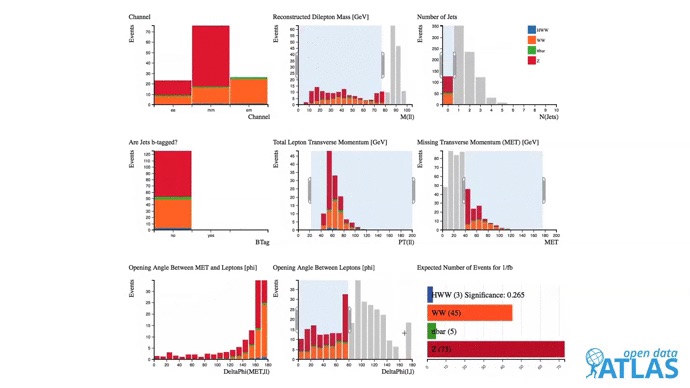 On Friday, 29 July, the ATLAS experiment at CERN released the data from 100 trillion proton-proton collisions to the public. This is the world’s first open release of 8 TeV data, which was gathered using the Large Hadron Collider in 2012.

In parallel with the data release, ATLAS has launched a comprehensive educational platform to guide university-level students and teachers on how to use the data and the corresponding analysis tools. With the extensive documentation provided, users can follow worked examples using the ATLAS open dataset and carry out analyses on their own

ATLAS has made seven physics analyses available, giving necessary theoretical context to the real ATLAS data. Users can carry out measurements of Standard Model particles, hunt for the Higgs boson and even search for physics beyond the Standard Model.

Moreover, the ATLAS data can be accessed and analysed without downloading a single file. This will allow students and teachers to focus on what’s important: understanding the physics processes. For further, more complex analyses, all of the necessary software, tools and datasets are available for download on the platform.

The ATLAS data and tools weigh in at just under 11 GB, making them easy to store on personal computers. This flexibility opens new doors for educators in developing countries who may have limited computing resources. Teachers with little-to-no internet connection can also contact atlas.outreach.data.tools@cern.ch to request the full ATLAS Open Data platform on a USB stick.

­To access the data and tools, visit the ATLAS Open Data website or the CERN Open Data portal. A longer version of this article was originally published on the ATLAS website: https://atlas.cern/updates/atlas-news/explore-lhc-data-new-atlas-educational-platform.