On the experiments’ side, the extended year-end technical stop is a precious opportunity to carry out repairs and maintenance works on their detectors 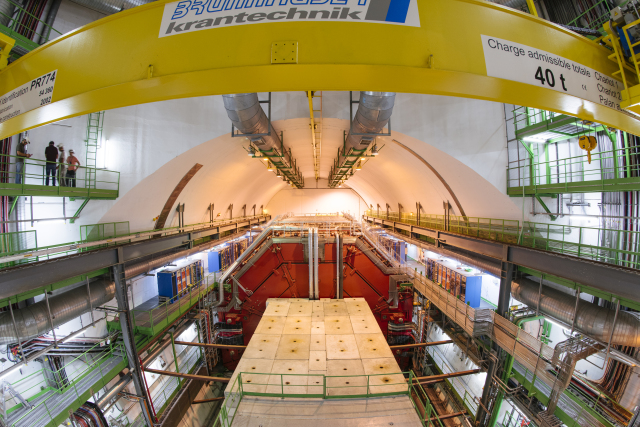 A view of the ALICE experimental cavern. (Image: Maximilien Brice/CERN)

Many facilities across the accelerators chain are being repaired and upgraded since the second week of December 2016, as soon as the LHC operations were stopped. But this year's extended year-end technical stop (EYETS) is also an opportunity for the experiment collaborations to perform prolonged maintenance activities and preparatory works for the HL-LHC upgrade on their detectors.

Diverse, delicate and time-consuming maintenance activities are being carried out on the ALICE detectors, especially on the electronic equipment and services, such as cooling, ventilation and electricity. Some of the electronic boards of the time-of-flight detector and the photon spectrometer will be replaced, and other minor work will be performed on the electronics and mechanics of the two calorimeters.

The gas of the time projection chamber (TPC) will be changed in an attempt to reduce the distortions that are currently affecting the TPC data and that require complex correction algorithms. At the same time, different prototypes of optical fibres necessary for the HL-LHC upgrade are being installed and will be tested during the next operation period. The commissioning of all ALICE's different detectors is foreseen for the end of March.

At Point 1, the ATLAS detector has been fully opened, and all sub-detectors are now accessible for maintenance. The EYETS started with repairs to the calorimeter cooling and power supplies that had some issues in 2016. Moreover, the data acquisition systems of several ATLAS sub-detector systems are being upgraded, in order to cope with the higher instantaneous luminosities and pile-up expected in 2017.

The installation of additional small muon chambers has started: as an extension of the ATLAS muon spectrometer, they will provide a rate capability an order of magnitude higher, and they can be installed in detector regions where regular muon chambers do not fit.

Finally, the installation of the second arm of the ATLAS Forward Proton (AFP) project is well under way: this will complete the AFP, which saw its first arm installed in the 2015/2016 YETS. The AFP project promises a significant extension to the physics reach of ATLAS by tagging and measuring the momentum and emission angle of very forward protons.

At LHCb, the maintenance period for work on the detectors was shrunk to a minimum this year because of the replacement of the lift and the revamping of the overhead cranes. Five weeks in total were available to perform all the regular checks, repairs and maintenance on the detectors. The large calorimeter detectors were opened for just enough time to perform the necessary work, before wrapping the LHCb detector in an envelope aiming to protect the detectors during the heavy work using the lift and cranes.

In addition, exceptional work was performed on the ring imaging Cherenkov detector and the tracker in front of the dipole. The Cherenkov detector was opened and brought down to the pit floor to exchange a few photon detectors and some front-end electronics parts. The tracker's modules were shipped to Zurich to repair a few broken bonds and reinstalled the following week.

In the next issue of the Bulletin for the CERN Community we will report on the EYETS activities on the CMS detector.