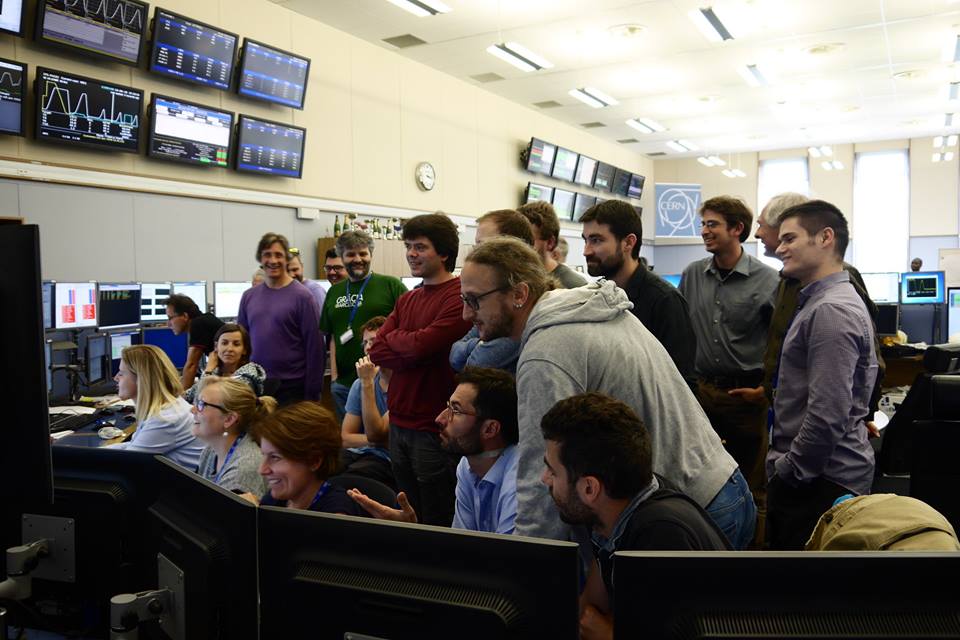 The team in the control room on the 16 June 2016 as the first beam of particles are sent through the proton beam line to the AWAKE experiment (Image: Ans Pardons/CERN)

For the first time a beam of particles has been sent through the pioneering AWAKE experiment signaling the next stage of its commissioning.

This is a test beam, meaning its purpose is to see whether all the parts of the beam line to the experiment are working correctly, and that the magnets are aligning the beam in the correct way.

AWAKE (the Advanced Proton Driven Plasma Wakefield Acceleration Experiment) will be the first accelerator of its kind in the world. It is currently under construction, but hopes to test the concept that plasma wakefields driven by a proton beam could accelerate charged particles.

The proton beam has to travel along around 800 m of proton beam line through the 10 m plasma cell, which at the moment is just an empty tube as the plasma is not filled yet, then downstream are several detectors.

“What was really nice is that when we first sent the beam down the proton line to the experiment area, it immediately hit the last detector, verifying our calculations and installation. We can now move onto the next stage of commissioning. There is a strong and wonderful team behind this success,” explains Edda Gschwendtner, the project leader.

“Now we have to do the real work, checking all the details, but it’s great that the very first test showed everything is very consistent. Yes, now we have the beam but we still have to measure and calibrate everything, like the beam instrumentation along the beam line,” says Edda.

AWAKE hopes to start collecting physics data by the end of the year. Next the team will finalise installation of the experiment, the laser and the full plasma cell.

If it works this technology will mean linear colliders in the future could be much shorter, and even table-top accelerators could be possible.