In a paper published today in the European Physical Journal C, the ATLAS Collaboration reports the first high-precision measurement of W boson mass 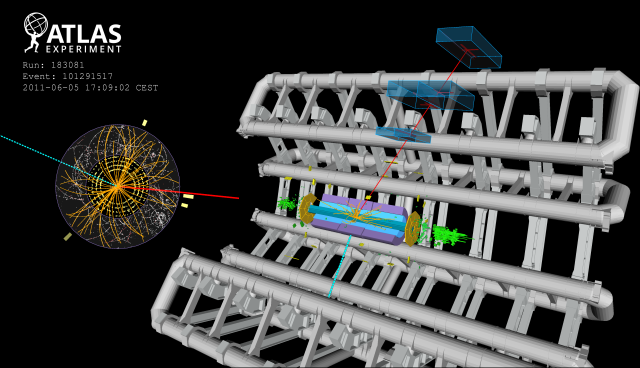 Display of a candidate event for a W boson decaying into one muon and one neutrino from proton-proton collisions recorded by ATLAS with LHC stable beams at a collision energy of 7 TeV (Image: CERN)

In a paper published today in the European Physical Journal C, the ATLAS Collaboration reports the first high-precision measurement at the Large Hadron Collider (LHC) of the mass of the W boson. This is one of two elementary particles that mediate the weak interaction – one of the forces that govern the behaviour of matter in our universe. The reported result gives a value of 80370±19 MeV for the W mass, which is consistent with the expectation from the Standard Model of Particle Physics, the theory that describes known particles and their interactions.

The measurement is based on around 14 million W bosons recorded in a single year (2011), when the LHC was running at the energy of 7 TeV. It matches previous measurements obtained at LEP, the ancestor of the LHC at CERN, and at the Tevatron, a former accelerator at Fermilab in the United States, whose data made it possible to continuously refine this measurement over the last 20 years.

The W boson is one of the heaviest known particles in the universe. Its discovery in 1983 crowned the success of CERN’s Super proton-antiproton Synchrotron, leading to the Nobel Prize in physics in 1984. Although the properties of the W boson have been studied for more than 30 years, measuring its mass to high precision remains a major challenge.

“Achieving such a precise measurement despite the demanding conditions present in a hadron collider such as the LHC is a great challenge,” said the physics coordinator of the ATLAS Collaboration, Tancredi Carli. “Reaching similar precision, as previously obtained at other colliders, with only one year of Run 1 data is remarkable. It is an extremely promising indication of our ability to improve our knowledge of the Standard Model and look for signs of new physics through highly accurate measurements.”

The Standard Model is very powerful in predicting the behaviour and certain characteristics of the elementary particles and makes it possible to deduce certain parameters from other well-known quantities. The masses of the W boson, the top quark and the Higgs boson for example, are linked by quantum physics relations. It is therefore very important to improve the precision of the W boson mass measurements to better understand the Higgs boson, refine the Standard Model and test its overall consistency.

Remarkably, the mass of the W boson can be predicted today with a precision exceeding that of direct measurements. This is why it is a key ingredient in the search for new physics, as any deviation of the measured mass from the prediction could reveal new phenomena conflicting with the Standard Model.

The measurement relies on a thorough calibration of the detector and of the theoretical modelling of the W boson production. These were achieved through the study of Z boson events and several other ancillary measurements. The complexity of the analysis meant it took almost five years for the ATLAS team to achieve this new result. Further analysis with the huge sample of now-available LHC data, will allow even greater accuracy in the near future.