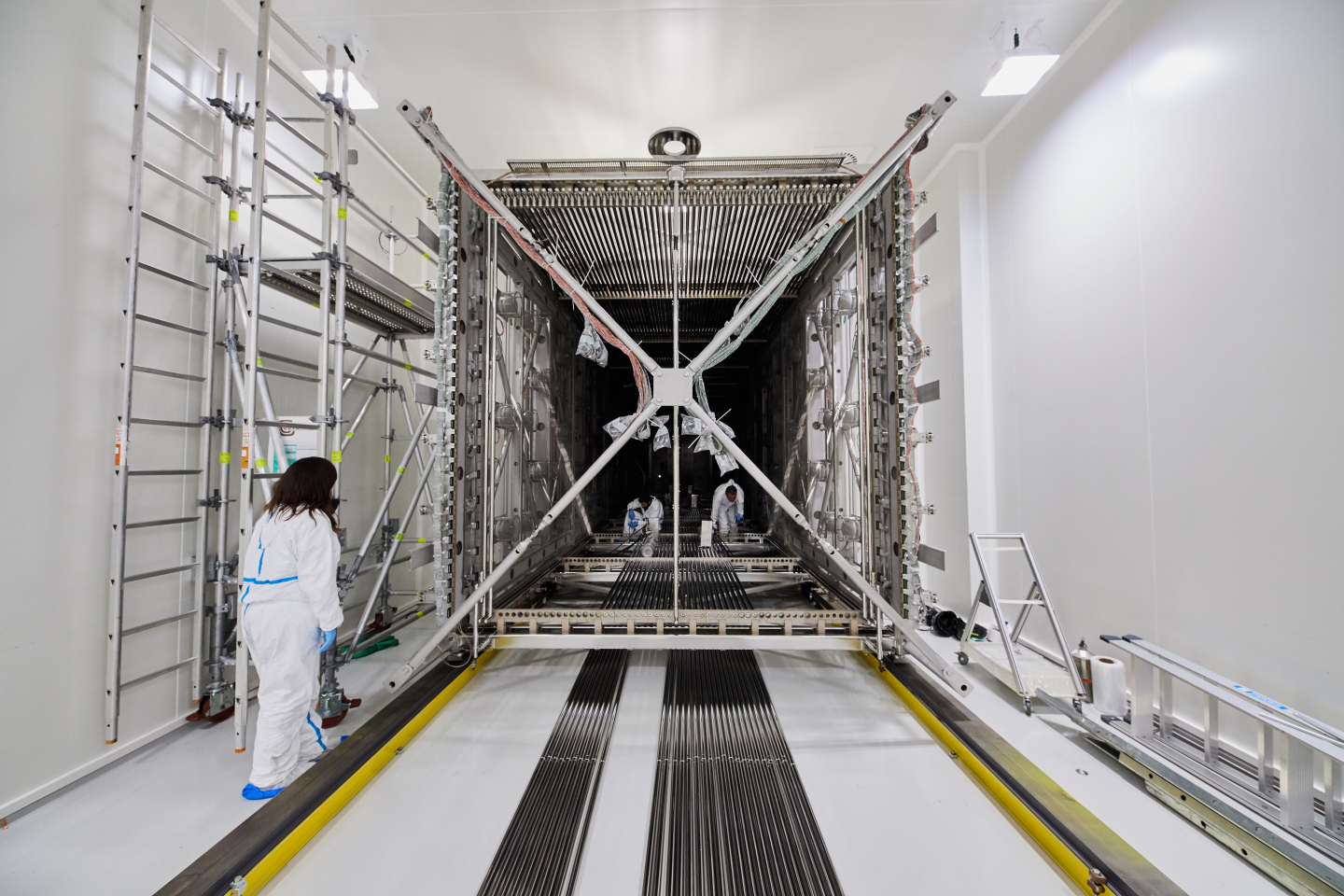 ICARUS has been at CERN for refurbishment before it makes its way to Fermilab over the next few months (Image: Maximilien Brice/CERN)

It’s lived in two different countries and is about to make its way to a third. It’s the largest machine of its kind, designed to find extremely elusive particles and tell us more about them. Its pioneering technology is the blueprint for some of the most advanced science experiments in the world. And this summer, it will travel across the Atlantic Ocean to its new home (and its new mission) at the U.S. Department of Energy’s Fermi National Accelerator Laboratory.

The ICARUS detector measures 18 meters (60 feet) long and weighs 120 tons. It began its scientific life under a mountain at the Italian National Institute for Nuclear Physics’ (INFN) Gran Sasso National Laboratory in Italy in 2010, recording data from a beam of particles called neutrinos sent by CERN. The detector was shipped to CERN in 2014, where it has been upgraded and refurbished, at the CERN Neutrino Platform, in preparation for its overseas trek.

“We are very pleased and proud that CERN has been able to contribute to the refurbishment of the ICARUS detector and we are looking forward to first results from the Fermilab short-baseline neutrino programme in the coming years,” said Fabiola Gianotti, Director-General of CERN.

When it arrives at Fermilab, the massive machine will take its place as part of a suite of three detectors dedicated to searching for a new type of neutrino beyond the three that have been found. Discovering this so-called “sterile” neutrino, should it exist, would rewrite scientists’ picture of the universe and the particles that make it up.

“Nailing down the question of whether sterile neutrinos exist or not is an important scientific goal, and ICARUS will help us achieve that,” said Fermilab Director Nigel Lockyer. “But it’s also a significant step in Fermilab’s plan to host a truly international neutrino facility, with the help of our partners around the world.”

First, however, the detector has to get there. Today, it will begin its journey from CERN in Geneva, Switzerland to a port in Antwerp, Belgium. From there the detector, separated into two identical pieces, will travel on a ship to Burns Harbor, Indiana, in the United States, and from there will be driven by truck to Fermilab, one piece at a time. The full trip is expected to take roughly six weeks.

The detector uses liquid-argon time projection technology – essentially a method of taking a 3-D snapshot of the particles produced when a neutrino interacts with an argon atom – which was developed by the ICARUS collaboration, and now is the technology of choice for the international Deep Underground Neutrino Experiment (DUNE), prototypes of which are currently being built at CERN.

"More than 25 years ago Nobel Prize winner, and a previous CERN Director-General, Carlo Rubbia started a visionary effort with the help and resources of INFN to make use of liquid argon as a particle detector, with the visual power of a bubble chamber but with the speed and efficiency of an electronic detector,” said Fernando Ferroni, president of INFN. “A long series of steps demonstrated the power of this technology that has been chosen for the gigantic future experiment DUNE in the U.S., scaling up the 760 tons of argon for ICARUS to 70,000 tons for DUNE. In the meantime, ICARUS will be at the core of an experiment at Fermilab looking for the possible existence of a new type of neutrino. Long life to ICARUS!”

This research is supported by the DOE Office of Science, CERN and INFN, in partnership with institutions around the world.