This week, the LHC will ignore its motto of ‘maximum luminosity’, and perform special runs at very low luminosity 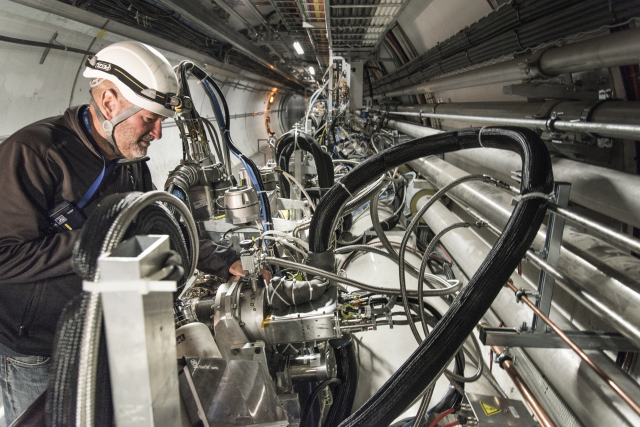 Nicola Turini, deputy spokesperson for TOTEM, in front of one of the experiment’s so-called ‘Roman Pot’ detectors in the LHC tunnel. (Image: Maximilien Brice/CERN)

Usually, the motto of the LHC is ‘maximum luminosity’ (in other words, as many collisions as possible).

But this week, the LHC will ignore its motto, and perform special runs at very low luminosity for the TOTEM and ATLAS/ALFA experiments.

This is because scientists want to study a particular type of interaction, called “elastic scattering”. Elastic scattering is when two protons survive their encounter in the detector intact, without colliding head-on, so they don’t create new particles and only slightly change their direction. In normal LHC runs, this interaction is not observable, as the protons are more likely to crash into each other and create new particles.

These elastic interactions are precious to scientists, as they allow them to study the way protons are made up inside and also what part of the proton is actually responsible for this type of interaction. Indeed, we know that the protons are composite particles, made up of 3 quarks (two “up” and one “down”) ‘glued’ together by gluons. But we don’t know the exact disposition of these components, neither do we know how many or what particles are actually playing a role when two protons bounce off each other in elastic scatterings.

Eventually, these type of studies are also useful for understanding the dynamics of cosmic rays – high-energy particles that originate outside the Solar System that, while travelling towards the Earth’s surface, impact with its atmosphere to produce a shower of secondary particles.

TOTEM and ATLAS/ALFA run detectors located on both sides of two of the big LHC detectors, CMS for TOTEM, and ATLAS for ATLAS/ALFA. These special experiments study the protons as they come out of elastic scattering interactions at slightly-changed angles in respect to their initial trajectory (the so-called “forward region”).

One of the most fascinating physics goals of TOTEM is to get information on the probability that two protons pass completely through each other without interfering. This might appear awkward if you think of a proton as a billiard ball, but instead you have to try to imagine the two scattering protons as large ‘galaxies’ (made up inside of tiny moving particles) launched at high speed against each other: there is a finite probability that the two ‘galaxies' will pass through each other without the inner particles interacting significantly.

ALFA stands for Absolute Luminosity For ATLAS, and indeed its goal is to provide an independent estimate of the LHC luminosity by measuring this proton–proton elastic scattering at small angles.

For more information about TOTEM and ATLAS/ALFA and the LHC special physics run, read here.