Each week CERN people answer questions live on YouTube in Hangout with CERN. Give feedback for the chance to win tickets to see comedian Eddie Izzard 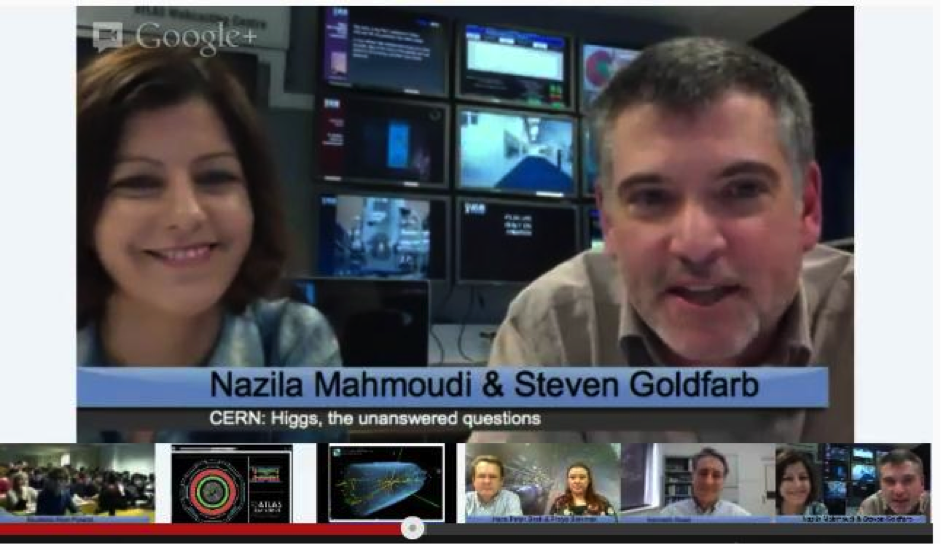 Currently in its second series, the “Hangout with CERN” initiative is going strong, with thousands of people tuning in every week to find out more about CERN's activities.

The idea of hangouts began in early 2012, when Achintya Rao of the CMS collaboration started to use them to engage with the public, following on from the award-winning ATLAS virtual visits that had begun in 2011. As 2012 unfolded, CERN, ATLAS, ALICE and LHCb joined CMS and began to post regular content on the Google+ social media platform. The stage was set for the first series of Hangout with CERN.

Hangouts are video conferences on Google+ that stream live to YouTube, where they are recorded and stored. In a Hangout with CERN, the online public see CERN locations and put questions informally to CERN people. Each week, CERN participants define a topic and collect questions in advance from CERN’s Facebook, Twitter and Google+ social media channels. Viewers of the live shows can post questions and answer trivia in real time and even join the hangout from their Google+ accounts to ask questions in person.

As numbers of live viewers rose from 200 to more than 1000, and as many as 10,000 people viewing recordings after the live sessions, it was clear that hangouts were here to stay.

Series 2 began in January this year and has so far featured hangouts about the proton-ion run and Grid computing. Topics now span two weeks to make sure as many questions are answered as possible. For the next hangout – today at 5pm CET – the series will head back to the CMS cavern in a special hangout in collaboration with the Google Science Fair. If all goes to plan, CMS spokesperson Joe Incandela will be answering questions online from 100 metres below ground.

As well as providing a virtual window into the laboratory’s impressive locations, the Hangout with CERN series enables CERN’s diverse mix of people to talk directly and informally with a worldwide public about their work, passing on their infectious excitement. Not a bad result from a collection of laptops and web-cams! See past hangouts and find out more.

What would you like to see in a future Hangout with CERN? Send your feedback to social.media@cern.ch and you will be entered into our prize draw to win tickets to see comedian Eddie Izzard perform his show "Force Majeure" at the Geneva Arena on either Thursday 25 April or Friday 26 April. We have two pairs of tickets for each day to be won and will notify winners by 1 March.