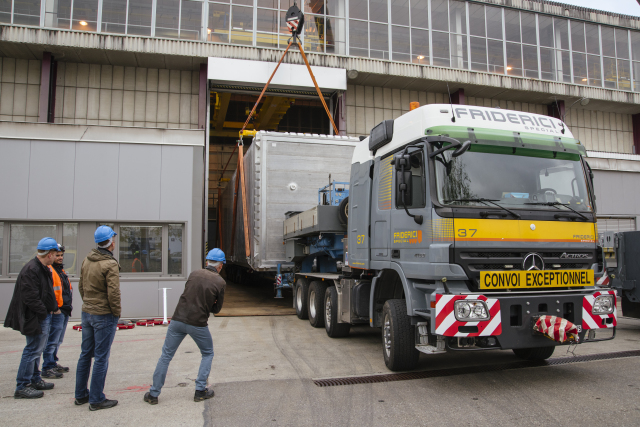 On 12 October, the ICARUS cryostat was extracted from Building 156 and brought to the front of Building 185, where the ICARUS detector is. Next, the detector will be inserted into it, and at the end of the year, shipped to Fermilab.

After a short but spectacular trip, the first enormous ICARUS cryostat was reunited with its detector. The ICARUS detector, consisting of two modules, has been refurbished over the past several months, as part of the CERN Neutrino Platform programme. It was previously used at the Gran Sasso Laboratory in Italy.

A brand new aluminium cryostat has been assembled in building 156, after an engineering feat to rotate and weld the module into place. On 12 October, the new cryostat was moved in front of building 185 to meet its detector.

The operation will be repeated with the second module soon. ICARUS will then be shipped to Fermilab, near Chicago in the US, to be part of the Short Baseline Neutrino (SBN) programme, in the beginning of 2017.

Find out more about what happened previously here.