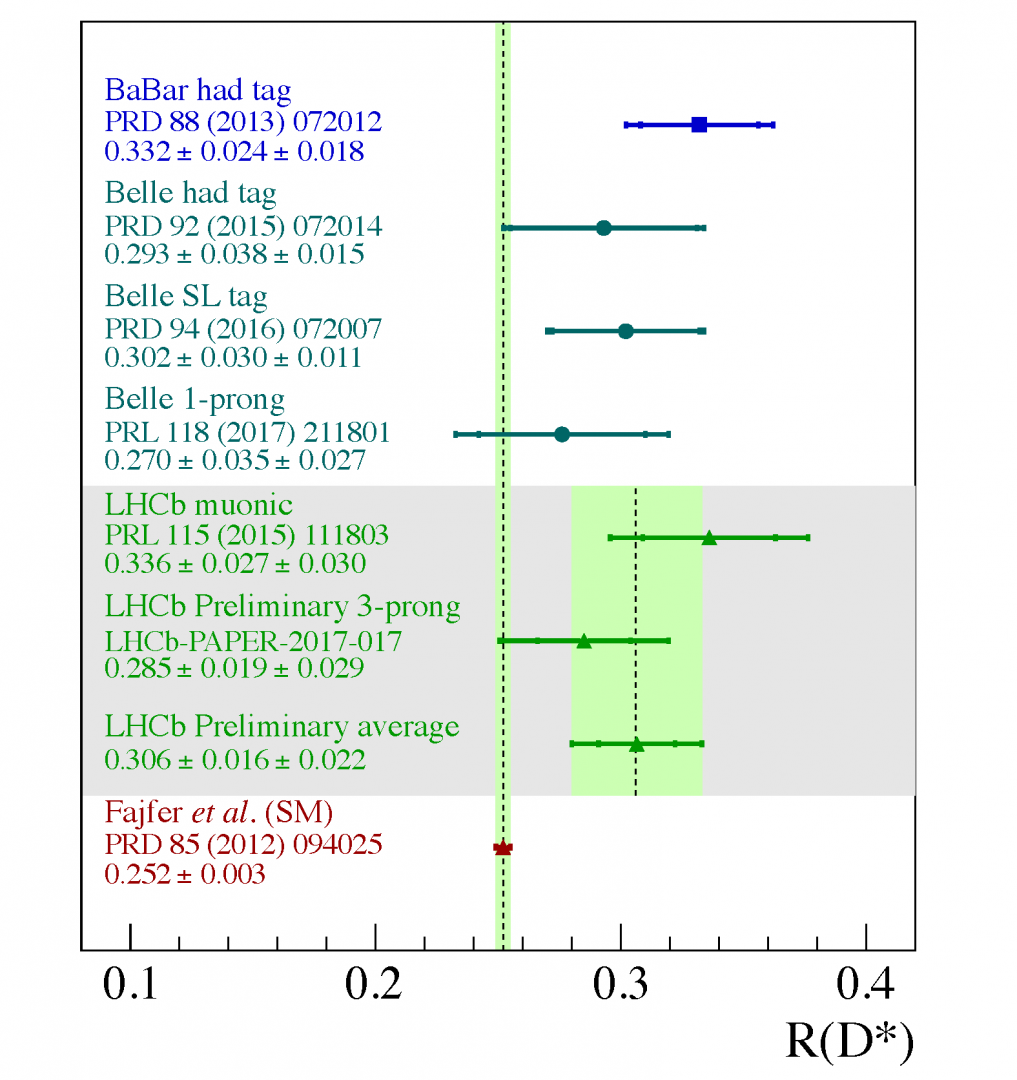 Measurements of R(D*) from LHCb (green region), BaBar and Belle compared to the Standard Model prediction (red). The measured values from the three different experiments are all higher than the SM prediction, although the statistical significance is low.

Two papers published today in Nature review recent flavour measurements from the LHCb experiment that are at odds with theoretical predictions. Much more data are needed before conclusions can be drawn, but the results – the latest of which was announced earlier this week – appear to challenge a cornerstone of the Standard Model (SM) called lepton universality.

In 2014, using data collected during LHC Run 1, the LHCb collaboration compared the rates of the reactions B+ -> K+μ+μ– and B+ -> K+e+e– to test lepton universality. If all leptons have the same couplings to gauge bosons, as the SM assumes, the ratio of these two reaction rates should be equal to unity, apart from well-understood effects related to the different lepton masses. But LHCb’s measurement of this ratio, R(K), differed from the SM prediction with a statistical significance of 2.6 standard deviations. This result was complemented by other measurements of anomalies from LHCb, in particular regarding an angular observable called P’5, which also showed tensions with the SM predictions.

The two latest Nature publications (one devoted to flavour changing neutral current decays and authored by four members of the LHCb collaboration, the other to tree-level semileptonic decays and authored by an independent group) summarise these and other results involving “semi-tauonic” B decays and explore their possible origins. Additional Higgs bosons, new gauge bosons or more exotic particles such as leptoquarks are among contenders, as are more mundane explanations ranging from low statistics to a better understanding of interference from charmonium states. In addition to LHCb, the papers also discuss related results from other experiments, including ATLAS, CMS, BaBar and Belle.

LHCb has since found similar results in other B decay modes. In April, the collaboration presented a measurement of R(K*) concerning the ratio of B0 -> K*0μ+μ– and B0 -> K*0e+e– decays, which again showed a difference with respect to the SM prediction of 2.1--2.5 standard deviations. Furthermore, only this week, at the 15th Flavor Physics and CP violation conference held in Prague, LHCb announced a new measurement of the quantity R(D*), which describes decays of B mesons into D mesons in conjunction with a muon or a tau and their associated neutrinos. Combined with previous R(D*) measurements from LHCb in 2015 based on a different decay channel, this latest result differs from the SM prediction with a total significance of 2.1 standard deviations.

None of these intriguing discrepancies in the flavour sector are yet at the level where they can be claimed as evidence for physics beyond the SM. The results nevertheless paint a consistent global picture and have generated significant theoretical activity, including an “instant workshop” at CERN on 17-19 May 2017 at which more than 100 participants discussed possible explanations for the LHCb anomalies. With LHC Run 2 already providing a sample more than twice as large as that of Run 1, it is now of great importance for LHCb to confirm or rule out these results.