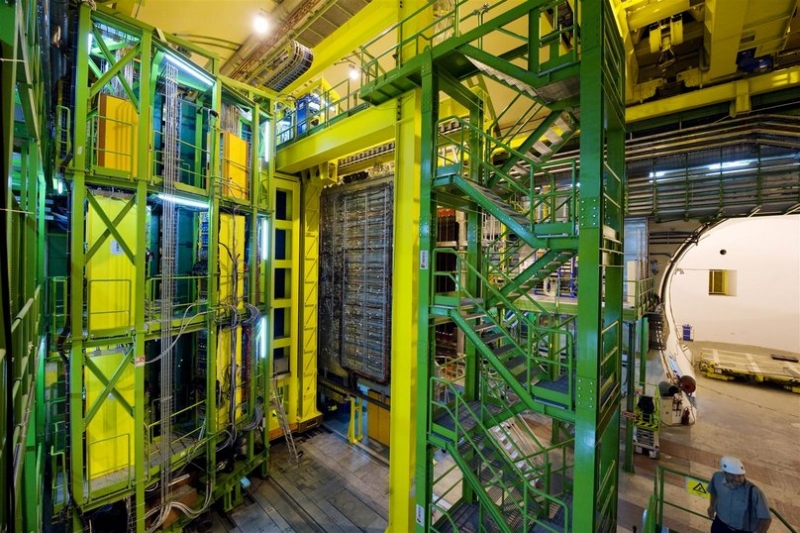 A view of the LHCb experimental cavern. (Image: Claudia Marcelloni/CERN)

On 28 June, the LHCb collaboration reported the observation of three new "exotic" particles and the confirmation of the existence of a fourth one in data from the Large Hadron Collider (LHC). Each of these particles seems to be formed by four quarks (the fundamental constituent of the matter inside all the atoms of the universe): two quarks and two antiquarks (that is, a tetraquark). Due to their non-standard quark content, the newly observed particles have been included in the broad category of so-called exotic particles, although their exact theoretical interpretation is still under study.

The quark model, proposed by Murray Gell-Mann and George Zweig in 1964, is considered to be the most valid scheme for the classification of hadrons (all the composite particles) that has been found so far, and it is part of the Standard Model of particle physics. In the quark model, hadrons are classified according to their quark content. However, the fact that all observed hadrons were formed either by a pair of quark-antiquarks (in the case of mesons) or by three quarks only (in the case of baryons) was a mystery for many years. But, in the last decade, several collaborations have found evidence of the existence of particles formed by more than three quarks. For example, in 2009 the CDF collaboration found such a particle, known as X(4140) – where the number in parentheses is its reconstructed mass in megaelectronvolts. This result was later confirmed by a new CDF analysis and by the CMS and D0 collaborations.

Nevertheless, the quantum numbers  – characteristic numbers with which the properties of a specific particle are identified –  of X(4140) were not fully determined, and this ambiguity exposed the theoretical explanation to uncertainty. The LHCb collaboration has now been able to determine these numbers with high precision. This result has a significant impact on the possible theoretical interpretations and, indeed, it excludes some of the previously proposed theories on its nature.

“The studies are very tough,” says Guy Wilkinson, spokesperson of the LHCb collaboration, “requiring a sophisticated modelling of all possible processes contributing to what is seen in the detector, but our analysts are highly skilled in these techniques.”

While the X(4140) had already been seen, this is the first time that the observation of the three new exotic particles with higher masses, known as X(4274), X(4500) and X(4700), has been announced. Even though the four particles all have the same quark composition, they each have a unique internal structure and mass and their own sets of quantum numbers.

These results are based on a detailed analysis of the decay of a B+ meson into mesons called J/ψ, φ and K+, where the new particles appear as intermediate ones decaying to a pair of J/ψ and φ mesons. To perform this research, the LHCb physicists used the full set of data collected during the first LHC run, from 2010 to 2012. The large signal yield efficiently collected by the LHCb detector has allowed the collaboration to discover the three new particles, which were (literally, see the picture) “peaking out” from the data.

“The Run 1 data set has allowed us to uncover these new particles,” Wilkinson continues. “The much larger sample which we have started to collect in Run 2 will allow for a much detailed studies of their properties, to help us understand better how the strong force builds hadrons from the constituent quarks.”

This news follows the discovery of the first two pentaquark particles by the LHCb collaboration last year.

“The results on the tetraquark, following on from the pentaquark discovery, shows what a rich and powerful facility the LHC is for improving our knowledge of hadronic spectroscopy,” Wilkinson happily notices. “This is a topic that was given little consideration when the LHCb experiment was being designed, but one for which the detector is remarkably well adapted,” he concludes.