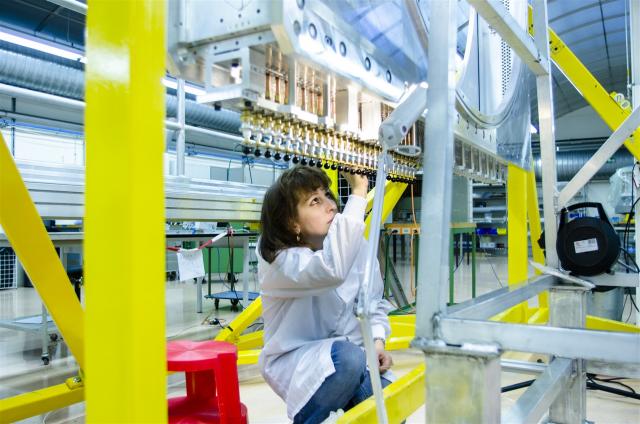 A precision technique is being tested for the first time at the NA62 experiment. A straw tracker will be placed directly into the experiment’s vacuum tank, allowing physicists to measure precisely the direction and momentum of particles from rare kaon decays. This decay rate may be influenced by particles and processes beyond the Standard Model.

“Though straw detectors have been around since the 1980s, NA62 straw trackers are different - they can work under vacuum,” says project leader Hans Danielsson. Straw detectors are small drift chambers; particles passing through a thin tube ionize gas molecules inside, which send signals as they collide with a wire. After 3 years of research and development, NA62 straws can withstand the high pressure exerted by the gas inside the experiment’s vacuum tank - an impressive 100 metres long by 2.5 m diameter. This is no mean feat, as NA62 straws have to be leak-proof and mechanically stable for over 2 metres to preserve the vacuum. Straw trackers are usually made by winding two conductive tapes in a spiral like the centre of a paper towel roll. Though the technique worked well for the ATLAS TRT straw detectors, it does not make mechanically stable, leak-proof straws, says Hans.

To tackle the problem, the NA62 team developed a new construction technique in collaboration with the Joint Institute for Nuclear Research (JINR) in Russia. A 31 mm band is rolled into a straw shape and then welded shut, leaving a single, 0.6 mm seam along its length. “We used ultrasonic welding to close the straw,” says Hans. “This welding technique not only made the straws completely leak-proof but also gave them the strength to keep them straight and withstand the vacuum pressure without breaking.”

About 2000 straws are now being assembled into 8 modules at CERN. Each module has 8 rows of straws, and each row is rotated 90 degrees to ensure that at least two coordinates are measured for each particle. The modules will be installed in the vacuum tank at four locations.

“We’re testing every straw individually, fitting them into the modules and connecting the electronics,” says Hans. A team from JINR will spend a few weeks testing modules and learning the assembly process.