A new subdetector for ATLAS

A new subdetector has been added to the very heart of ATLAS, closest to the beam pipe where particle collisions will occur 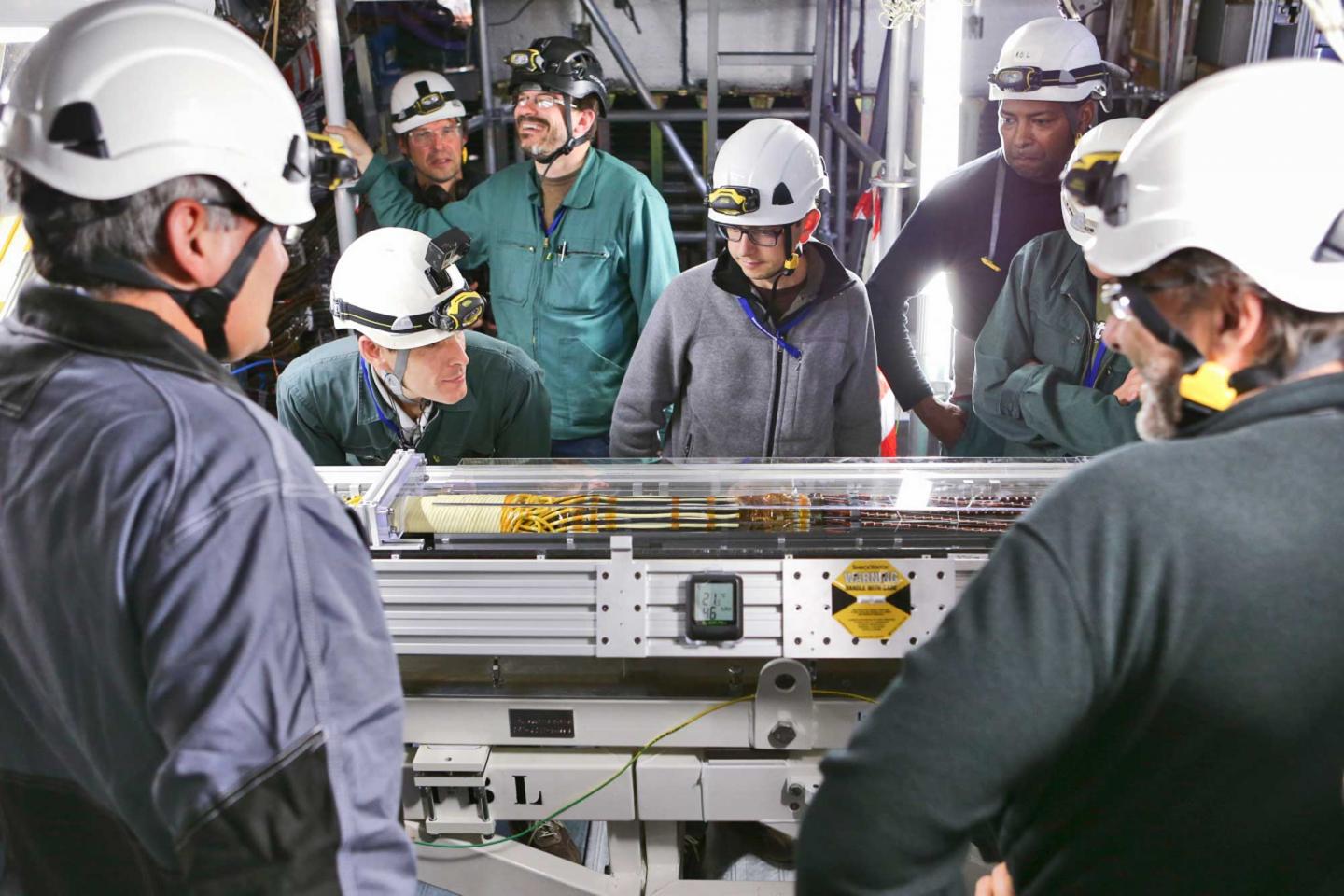 A team of physicists and engineers inspect the subdetector before its insertion into the ATLAS experiment (Image: Claudia Marcelloni De Oliveira/CERN)

Closest to the beam pipe where particle collisions will occur in the very heart of ATLAS, a new subdetector – the Insertable B-Layer – was recently put in place. The IBL team had been developing and practicing the insertion procedure and tooling for two years because of the operation’s delicate nature. Every possible test had been carried out. Unlike the dry runs above ground, the final procedure in the ATLAS cavern allowed only one chance.

The insertion gap between the Inner Supporting Tube and the IBL detector is only 0.2 mm and the gap between the supporting tube and the Pixel is 1.9 mm. Despite this narrow space, the procedure went smoothly and the work was completed ahead of schedule.

"The final insertion was the culmination of all the developments we’ve been doing," says Heinz Pernegger, project leader of the Pixel Detector. "The mockups and demonstrations we’ve gone through, we had practiced so many times."

"It is so satisfying to see the IBL in place," says Raphaël Vuillermet, who coordinated the engineering and installation. "The project started from a blank sheet of paper, with many problems to solve and few ideas about how to tackle them. Since then, we’ve gone through various phases. It is a very compact sub-detector because it had to contain all the services required for operation and still fit inside a tiny space that didn’t even exist previously, as only the reduction of the beam pipe diameter has allowed the insertion of this additional Pixel layer."

The problem given was that with higher luminosity in the LHC’s next run, significant radiation damage of the inner layers of the detector could occur, which meant ATLAS would lose tracking efficiency, especially in tagging the decay of the beauty quark – crucial for physics analyses. The idea was to minimize risks by creating an insertable layer instead of replacing the existing B-layer in the Pixel Detector. The IBL was born but the only way to integrate it was by shrinking the diameter of the beam pipe and inserting it into the gap between the Pixel Detector and the pipe.

The IBL is now the new fourth layer in the inner detector region of ATLAS, an additional point for tracking particles. More points mean better precision which is always good for physics.

Making space wasn’t the only challenge for the IBL project. Much of the technology did not exist. Increased luminosity in the LHC meant the IBL has to cope with high radiation and higher particle occupancy because of its proximity to the particle interaction point in the beam pipe. This also meant the number of hits on the detector and the amount of data collected will increase substantially. Faster read-out chips and two different silicon sensor technologies were developed. Pixel size was reduced to 50 by 250 micrometres, and a CO2-based cooling system was introduced as opposed to the C3F8. New carbon foam structures were invented to support the modules that make up the IBL. These staves had to be just firm enough to serve as mechanical support but flexible enough to be inserted.

As remarkable as the developments were, even more remarkable is the collaborative nature of the project. Forty-seven institutes from 15 countries were involved in the IBL team. Its success, as does everything else in ATLAS, depended on the members.

"The ambiance in the cavern during the insertion was pivotal," says Sébastien Michal, who together with Raphaël Vuillermet, coordinated the engineering and installation. "There was a lot of confidence there  because of the many practice sessions, but more importantly, there was a lot of trust."