The ICARUS detector is being refurbished at CERN, before being sent to the US in search of sterile neutrinos 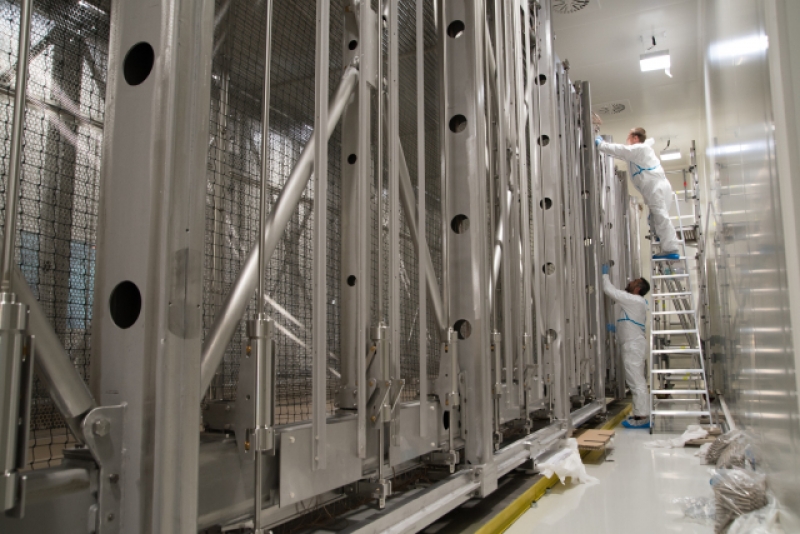 The ICARUS detector being refurbished at CERN in a clean room. (Image: Max Brice/CERN)

“Nothing is lost, everything is transformed”. This statement also applies to particle physics equipment, which is often reused for several projects. This is the case for ICARUS, a huge neutrino detector being refurbished at CERN.

ICARUS was used between 2010 and 2014 at the INFN Gran Sasso Laboratory in Italy to study neutrino oscillations using a beam of neutrinos produced at CERN (CNGS project, CERN Neutrinos to Gran Sasso). The 4-metre high, 20-metre long detector arrived at CERN 16 months ago and since then is undergoing a complete refurbishment. It will be then shipped to the United States to start a second life. It will be part of the Short Baseline Neutrino (SBN) programme at Fermilab, near Chicago, dedicated to the study of sterile neutrinos. Sterile neutrinos are a hypothetical type of neutrinos, called sterile because they don't interact with other particles in the same way the other three known types of neutrinos do. The hypothetical sterile neutrinos would only interact via gravity while the three known types of neutrinos also interact via the weak force.

The refurbishment is part of the CERN Neutrino Platform (CENF) project, started in 2014, to follow the recommendations of the European Strategy for Particle Physics, and it is done in collaboration with the INFN and Fermilab.

The ICARUS detector is a big box filled with liquid argon to which a high-voltage, electric field is applied: when a particle passes through it creates a wake of electrons that drift towards the walls where they are detected. Knowing the arrival time and the position of the drifted electrons, one can reconstruct a three-dimensional image of the event.

The renovation campaign at CERN includes replacing many parts of this original detector, as well as the construction of a brand-new cryostat – the cold box containing the detector –  in aluminium.

When the cryostat will be ready it has to be moved out of its current building, brought in front of the clean room where the detector is, and the two parts will be assembled. The overhaul should last until the end of 2016. At the beginning of 2017, an exceptional load transport will carry it all the way to Fermilab to start its new adventure.