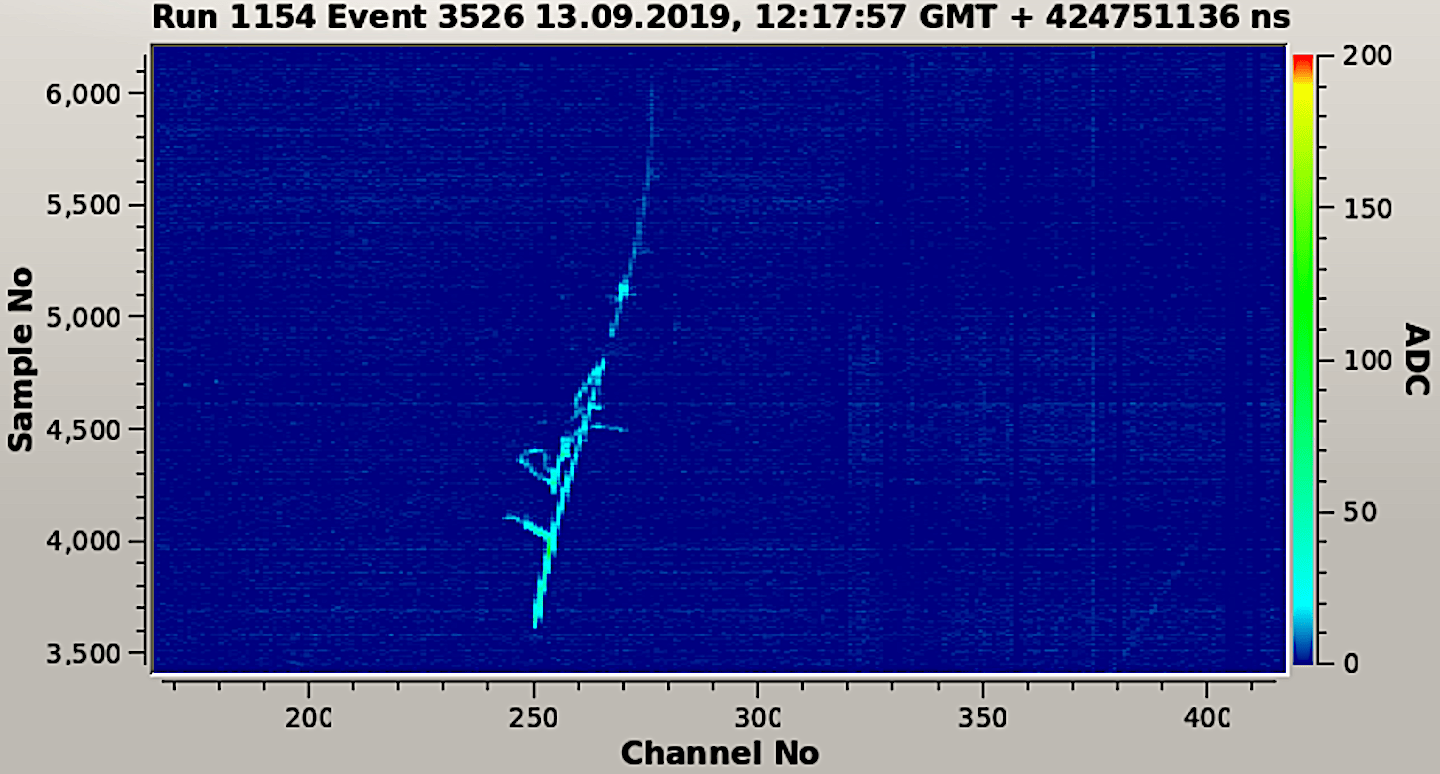 A track made by a cosmic-ray muon, observed in the dual-phase ProtoDUNE detector. The ionisation released by the muon track in liquid argon and by the correlated electromagnetic activity can be seen (Image: ProtoDUNE)

Scientists working at CERN have started tests of a prototype for a new neutrino detector, using novel and very promising technology called “dual phase”. If successful, this technology will be used at a much larger scale for the international Deep Underground Neutrino Experiment (DUNE), hosted at Fermilab in the US.

Scientists began operating the dual-phase ProtoDUNE detector at CERN at the end of August, and have observed the first particle tracks. The detector is a cube about six metres long in each direction – the size of a three-storey house – and is filled with 800 tonnes of argon.

The new technology would be used in addition to so-called single-phase detectors that have been successfully operated for many years. “The single-phase technology is a proven method that will be used to build the first module for the DUNE detector,” said DUNE co-spokesperson Ed Blucher of the University of Chicago. “The dual-phase technology provides a second method that has great potential to add to the DUNE detector’s capabilities.” Indeed, the dual-phase technology may be game-changing: it would significantly amplify the faint signals that particles create when moving through the detector.

The single-phase ProtoDUNE, which began taking data at CERN in September 2018, is filled entirely with liquid argon. Sensors submerged in the liquid record the faint signals generated when a neutrino smashes into an argon atom. The dual-phase version uses liquid argon as the target material and a layer of gaseous argon above the liquid to amplify faint particle signals before they arrive at sensors located at the top of the detector, inside the argon gas. The dual-phase set-up could yield stronger signals and would enable scientists to look for lower-energy neutrino interactions.

The innovative data-collection electronics, each with a surface area of nine square metres, are individually suspended a few millimetres above the liquid level. They sit in the gas layer near the top of the detector, which has special chimneys that open from the outside. This offers the advantage that the electronics can be accessed even when most of the detector is filled with liquid argon at a temperature below −184 °C.

The dual-phase detector features a single active volume with no detector components in the middle of the liquid argon and a reduced number of readout elements at the top. This reduces “dead space” within the detector volume and offers the neutrinos a larger target.

The single- and dual-phase prototypes at CERN are small components of the detector that the DUNE collaboration plans to build in the United States over the next decade: a DUNE detector module will house the equivalent of twenty ProtoDUNEs and operate at up to 600 000 volts.

DUNE plans to build four full-size detector modules based on argon technology. These will be located around 1.5 km underground, at the Sanford Underground Research Facility in South Dakota. Scientists will use them to understand whether neutrinos could be the reason that matter dominates over antimatter in our universe.

First particle tracks seen in prototype for i...

Taking the temperature of protoDUNE