A very special run for the LHCb experiment

During the 2017 LHC special runs, the LHCb experiment collected proton-proton and proton-neon data simultaneously for the first time 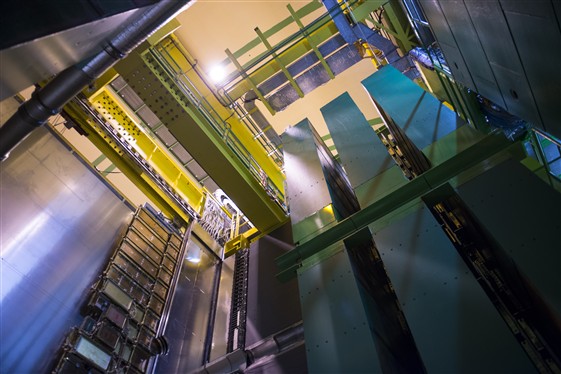 For the first time, the LHCb experiment at CERN has collected data simultaneously in collider and in fixed-target modes, making this special run is even more special.

The past two weeks have been devoted to special runs of the Large Hadron Collider (LHC), at the end of the LHC 2017 proton run and before the winter shutdown. One run involved proton collisions at an energy of 5.02 TeV, mainly to set a reference to compare with lead-ion collision data. What was exceptional this year is that a tiny quantity of neon gas was injected into the beam pipe near the LHCb experiment’s interaction point. This allowed physicists to collect proton-neon data at the same time as proton-proton collision data.

When (noble) gases are injected into the beam pipe to collide with protons, the LHCb experiment is in “fixed-target” mode, in contrast to the standard “collider” mode. But unlike traditional fixed target experiments, where the beam of accelerated particles is directed at a dense solid or liquid target, here LHC protons are colliding with a handful of neon nuclei injected near the collision point and floating in the beam pipe. These nuclei slightly pollute the almost perfect LHC vacuum, but the conditions they create – where pressure is in the order of 10-7 millibar – are still considered to be typical of ultra-high vacuum environments.

There are two main reasons for collecting proton-gas collision data at the LHC. On one hand, these data help us to understand the nuclear effects (i.e. depending on the type of nuclei involved in the collisions) affecting the production of specific types of particles (J/ψ and D0 mesons), whose suppressed production is considered to be the hallmark of the quark-gluon plasma. The quark-gluon plasma is the state in which the matter filling the universe was a few millionths of a second after the Big Bang, when protons and neutrons had not yet formed, composed of quarks not binding together and free to move on their own.

On the other hand, proton-neon interactions are also important for the study of cosmic rays – highly energetic particles, mostly protons, coming from outside the Solar System – when they collide with nuclei in the Earth’s atmosphere. Neon is one of the components of the Earth’s atmosphere and it is very similar in terms of nuclear size to the much more abundant nitrogen and oxygen.

This gas-injection technique was originally designed to measure the brightness of the accelerator's beams, but its potential was quickly recognised by the LHCb physicists and it is now also being used for dedicated physics measurements. In 2015 and 2016, the LHCb experiment performed special proton-helium, proton-neon and proton-argon runs. In October this year, for eight hours only, the LHC accelerated and collided xenon nuclei, allowing the four large LHC experiments to record xenon-xenon collisions for the first time.

This recent 11-day proton-neon run will allow physicists to collect a dataset that is 100 times larger than all the proton-neon collision data previously collected at the LHC, and the first results of the analyses are foreseen for next year.