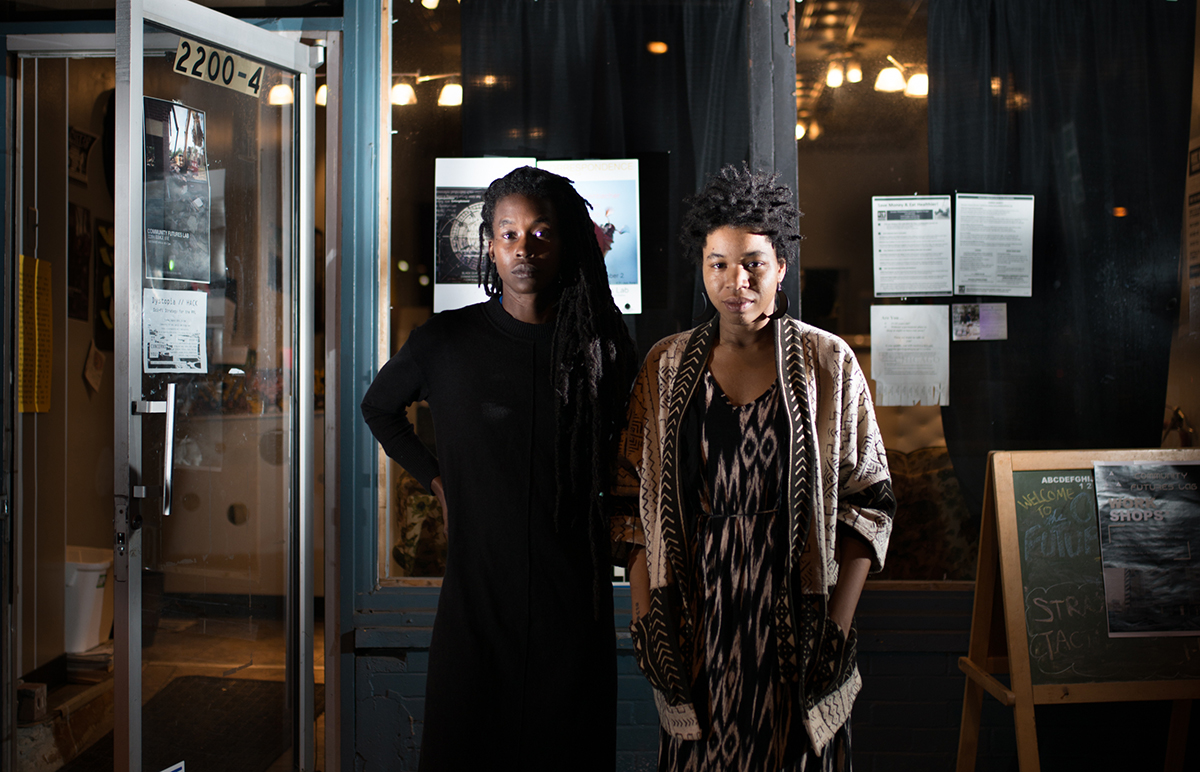 Following an international open call launched in October last year, Arts at CERN has announced the winner of the Collide residency award. Black Quantum Futurism, a collective based in Philadelphia (US), will first complete a two-month residency at CERN, followed by one month in Barcelona at the Hangar Centre for Art Research and Production, in connection with the city’s scientific laboratories.

Black Quantum Futurism is a multidisciplinary collaboration between the artists Camae Ayewa and Rasheedah Phillips. The duo explores the intersections of futurism, creative media, DIY-aesthetics, and activism in marginalised communities through an alternative temporal lens. Their work focuses on personal, cultural, familial and communal cycles of experience, and their expression methods range from writing, music and film to visual art and creative research projects.

During their residency, which is planned for summer 2021*, and in dialogue with the scientists and collaborators at CERN and in Barcelona, Ayewa and Phillips will extend their research and produce a new artwork based on their proposal entitled “CPT Symmetry and Violations”. In physics, CPT symmetry stands for charge, parity, and time reversal symmetry.

“The project seeks to understand the ways in which quantum physics can influence how people think about, experience and measure time in everyday reality, exploring the possibilities that quantum physics offers beyond the limitations of traditional, linear notions of time,” explain the artists. “Through the project we will connect with scientists based at CERN to learn more about their investigations of time in physics – specifically through studying experiments being done on CPT symmetry, CERN scientists’ investigations into quantum theories of gravity, and other phenomena of quantum physics as it concerns inquiries into time.”

The scope of this proposal will include a research period at CERN and a second, developmental phase in Barcelona in dialogue with various scientific laboratories and hosted at Hangar, where the artists will have the opportunity to expand their research and test its applications through Barcelona’s scientific and cultural network, as well as to engage with a wide range of cultural and scientific communities.

Additionally, the jury selected three Honorary Mentions: Rosa Barba (Italy, based in Berlin), Tania Candiani (Mexico, based in Mexico City) and Dennis Dizon (Philippines, based in Barcelona). They will be invited to take part in the Guest Artist programme of Arts at CERN: a short stay at the Laboratory to investigate and research ideas to support their proposals.

Collide is an annual competition that invites artists from across the world to submit proposals for a research-led residency based on interaction with CERN’s scientific community. The focus of the residency is to invite artists into the Laboratory to think, discuss, be informed and inspired, and to comprehend the challenges of fundamental research and the big questions that inform physics today. Through this process, the artists develop high-quality innovative engagement with CERN’s research and community. Direct interaction with scientists is fundamental to this process.

A total of 564 project proposals were received from 79 different countries for this ninth edition of Collide. The diversity, reach and quality of the proposals were remarkable and the decision was challenging.

The jury was composed of: Mónica Bello, curator and head of Arts at CERN; Stefanie Hessler, director of Kunsthall Trondheim; Lluis Nacenta, director of Hangar; Rosa Pera, independent curator; and Helga Timko, accelerator physicist at CERN. Collide has been organized in collaboration with Barcelona’s Institute of Culture and Barcelona City Council since 2019 as part of a three-year collaboration (2019-2021). The next call for proposals will be launched in autumn 2021.

*If exceptional COVID-19-related circumstances impacting travel and mobility arise during the residency period, a special residency model might be adopted. In such cases, the artist and scientific partners, as well as the CERN curators, would be in remote contact over a period of up to six months or until the project’s completion.