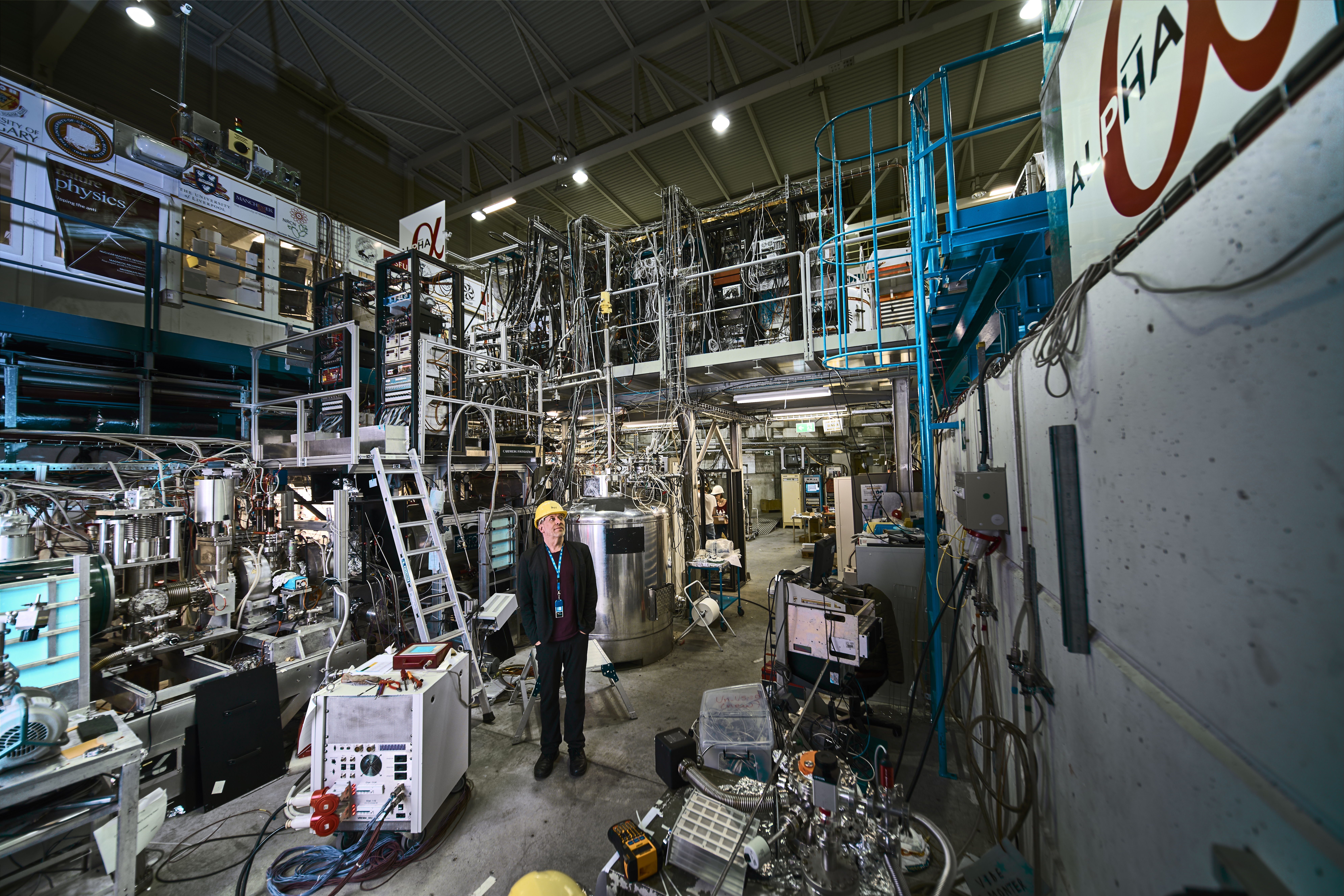 Jeffrey Hangst, spokesperson for the ALPHA experiment, next to the experiment. (Image: Maximilien Brice, Julien Ordan/CERN)

In a paper published today in the journal Nature, the ALPHA collaboration reports that it has literally taken antimatter to a new level. The researchers have observed the Lyman-alpha electronic transition in the antihydrogen atom, the antimatter counterpart of hydrogen, for the first time. The finding comes hot on the heels of recent measurements by the collaboration of another electronic transition, and demonstrates that ALPHA is quickly and steadily paving the way for precision experiments that could uncover as yet unseen differences between the behaviour of matter and antimatter.

The Lyman-alpha (or 1S-2P) transition is one of several in the Lyman series of electronic transitions that were discovered in atomic hydrogen just over a century ago by physicist Theodore Lyman. The transition occurs when an electron jumps from the lowest-energy (1S) level to a higher-energy (2P) level and then falls back to the 1S level by emitting a photon at a wavelength of 121.6 nanometres.

It is a special transition. In astronomy, it allows researchers to probe the state of the medium that lies between galaxies and test models of the cosmos. In antimatter studies, it could enable precision measurements of how antihydrogen responds to light and gravity. Finding any slight difference between the behaviour of antimatter and matter would rock the foundations of the Standard Model of particle physics and perhaps cast light on why the universe is made up almost entirely of matter, even though equal amounts of antimatter should have been produced in the Big Bang.

The ALPHA team makes antihydrogen atoms by taking antiprotons from CERN’s Antiproton Decelerator (AD) and binding them with positrons from a sodium-22 source. It then confines the resulting antihydrogen atoms in a magnetic trap, which prevents them from coming into contact with matter and annihilating. Laser light is then shone onto the trapped atoms to measure their spectral response. The measurement involves using a range of laser frequencies and counting the number of atoms that drop out of the trap as a result of interactions between the laser and the trapped atoms.

The ALPHA collaboration has previously employed this technique to measure the so-called 1S-2S transition. Using the same approach and a series of laser wavelengths around 121.6 nanometres, ALPHA has now detected the Lyman-alpha transition in antihydrogen and measured its frequency with a precision of a few parts in a hundred million, obtaining good agreement with the equivalent transition in hydrogen.

This precision is not as high as that achieved in hydrogen, but the finding represents a pivotal technological step towards using the Lyman-alpha transition to chill large samples of antihydrogen using a technique known as laser cooling. Such samples would allow researchers to bring the precision of this and other measurements of antihydrogen to a level at which any differences between the behaviour of antihydrogen and hydrogen might emerge.

“We are really excited about this result,” says Jeffrey Hangst, spokesperson for the ALPHA experiment. “The Lyman-alpha transition is notoriously difficult to probe – even in ‘normal’ hydrogen. But by exploiting our ability to trap and hold large numbers of antihydrogen atoms for several hours, and using a pulsed source of Lyman-alpha laser light, we were able to observe this transition. Next up is laser cooling, which will be a game-changer for precision spectroscopy and gravitational measurements.”

A new era of precision for antimatter researc...