Great manoeuvres have been undertaken by two neutrino detectors at CERN: ICARUS and Baby MIND 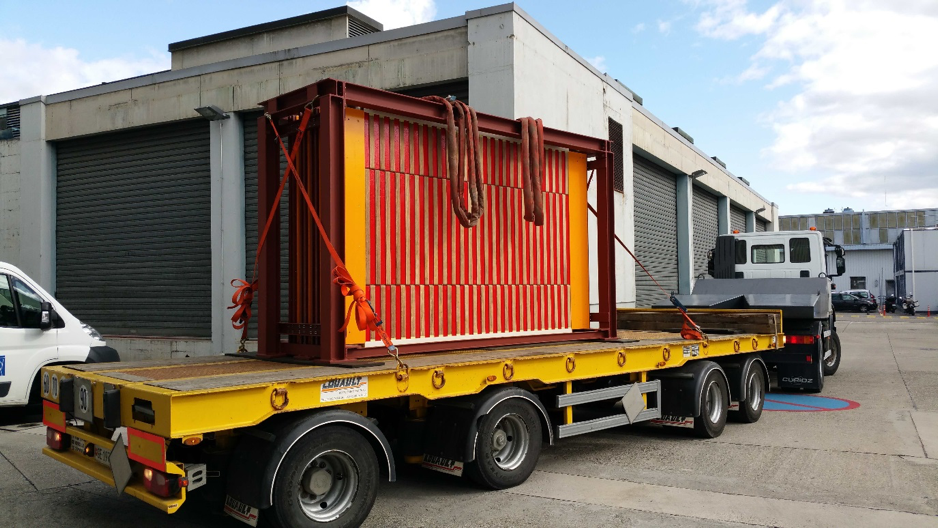 On 14 June, the Baby MIND neutrino detector was moved, module by module, from Building 180 to Building 157 (East Hall). The succession of coil windings and (red) iron plates is clearly visible. (Image: Etam Noah/University of Geneva)

This week, great manoeuvres have been undertaken by two neutrino detectors (temporarily) at CERN. While ICARUS started its voyage to reach its new home at Fermilab in the US, Baby MIND, a 75-tonne neutrino detector with a new magnetization scheme, was moved from the Large Magnets Facility building, where it was built, to the East Hall (Building 157), where it will be characterised in the Proton Synchrotron (PS) beam in the next few weeks.

Baby MIND is a prototype for a Magnetised Iron Neutrino Detector (MIND) whose goal is to precisely identify and track positively or negatively charged muons, in order to reconstruct the parent neutrinos that produced them interacting with matter. The more detailed is the identification of the muon that crosses the detector, the more we can learn about the original neutrino. After its testing and characterisation in the PS beam, it will be transported at the end of July to Japan, where it will be part of the (T59) WAGASCI experiment, contributing to a better understanding of the T2K neutrino oscillation experiment.