The BASE antiprotons celebrate their first birthday

BASE has kept a shot of antiprotons trapped for more than one year: it is the longest-lived, coldest, known baryonic antimatter object in the Universe 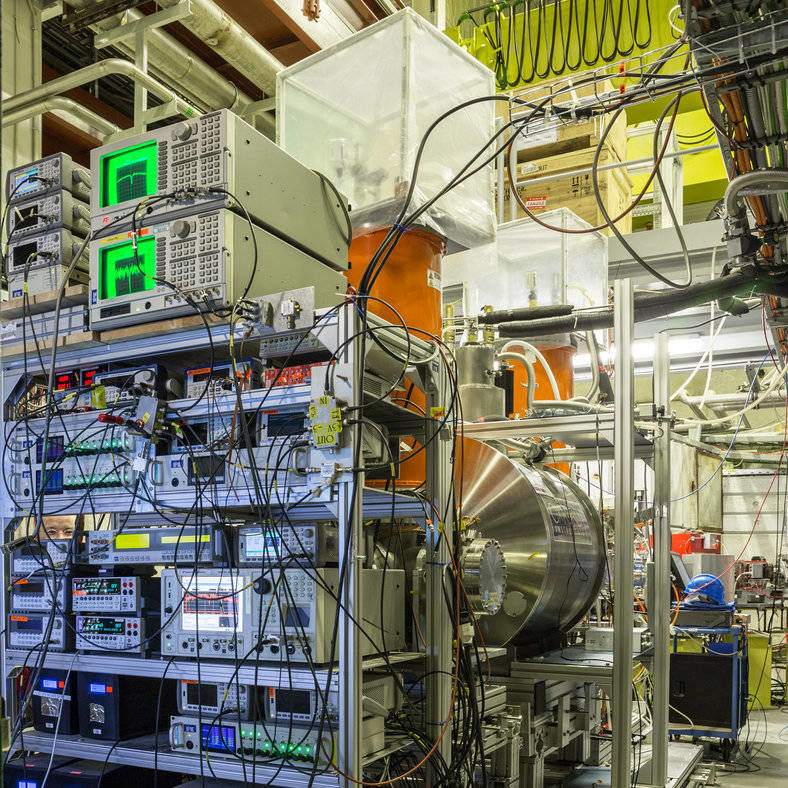 The BASE experiment zone with the antiproton transfer line and the superconducting magnet. The screens show the signals from single antiprotons stored in the BASE measurement traps. (Image: Stefan Sellner/CERN)

The Baryon Antibaryon Symmetry Experiment (BASE) at the Antiproton Decelerator (AD) facility at CERN has managed to keep a bunch of antiprotons trapped in its reservoir for more than one year now. The shot of antiprotons – the antimatter companions of protons – was loaded into the experiment’s reservoir trap on 12 November 2015 and the collaboration is still working with the same particles. This sets a number of records: no-one has previously managed to keep antimatter trapped for such a long period and, to the best of our knowledge, no other charged particles have been consistently confined for this long.

The BASE experiment is devoted to the precise comparison of the properties of protons and antiprotons: any discrepancy detected would hint at new physics beyond the Standard Model.

BASE conducts its high-precision experiments on one antiproton at a time, so it does not need a continuous beam of antiprotons. One shot of antiprotons from the AD facility contains enough antiprotons for the needs of BASE. “The antiproton reservoir enables us to run autonomously for months, which is especially useful in the winter shutdown period when there is no beam available from the AD,” says Stefan Ulmer, spokesperson for the BASE collaboration.

The reservoir trap is inside a cylinder with a volume of 1.2 litres. The particles are trapped by two overlying magnetic and electric fields, which keep the particles in a small volume in the centre of the trap. On one side of the trap there is a metal window, thin enough to allow the antiprotons to pass through but strong enough to ensure complete insulation from the outside. All the other sides of the trap are made from solid copper. The cylinder is then cooled to about 6 K (-267 °C) with liquid helium, so that an almost perfect vacuum is created. Indeed, if an antiproton meets a matter particle, it will be annihilated and disappear. The BASE team must therefore ensure that there are virtually no residual gas particles left in the reservoir. “Given that we have not observed any antiproton disappearance yet,” says Christian Smorra, a research fellow on the BASE collaboration, “we can say that there are less than three matter particles left per cubic centimetre.”

BASE’s reservoir trap has another unique characteristic. Antiparticles are the rarest species of particles in our universe, as they are only created in high-energy particle collisions or in a nuclear decay. Proton–antiproton symmetry is always extremely unbalanced towards protons. A reservoir of hundreds of antiprotons all confined in a small space in an almost perfect vacuum represents a significant local inversion of this asymmetry. “What is unique about BASE is that we can trap the particles for as long as we want to,” says Stefan Sellner, a post-doc researcher at BASE. “Also, our antiprotons are the coldest antimatter particles ever prepared, at temperatures very close to absolute zero,” he remarks.

At the end of the year, the BASE experiment will undergo a period of machine maintenance and development, which means that the antiprotons will be freed from the reservoir trap in which they have cohabited for over a year.