The ALICE, CMS and LHCb collaborations present new measurements that show how particles containing charm quarks can serve as “messengers” of hadrons and the quark–gluon plasma, carrying information about these forms of matter 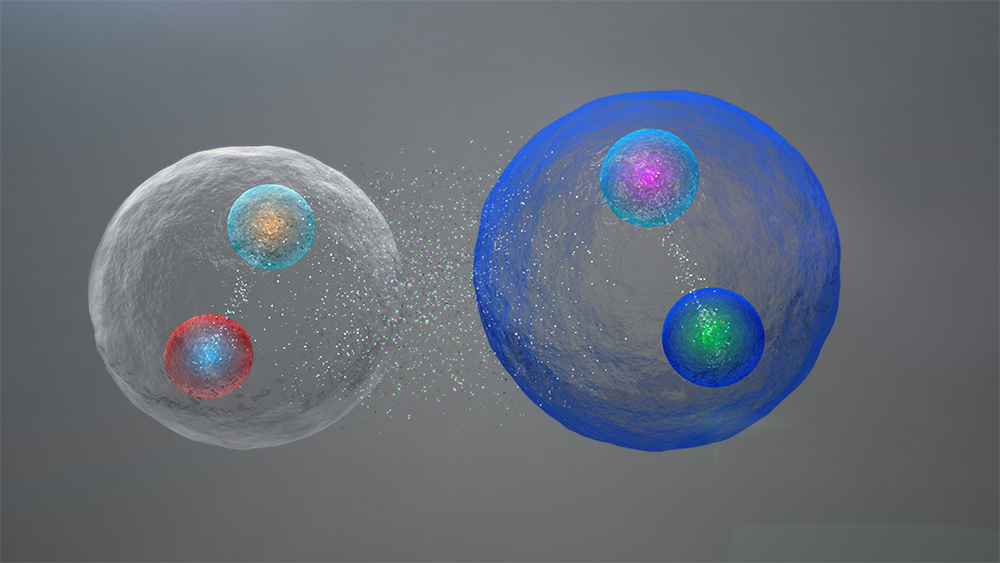 The Xc1(3872) hadron, which contains charm quarks, could be a pair of two-quark particles loosely bound together (Image: CERN)

This media update is part of a series related to the 2020 Large Hadron Collider Physics conference, taking place from 25 to 30 May 2020. Originally planned to take place in Paris, the conference is being held entirely online due to the COVID-19 pandemic.

The ALICE, CMS and LHCb collaborations at CERN present new measurements that show how charmed particles – particles containing charm quarks – can serve as “messengers” of two forms of matter made up of quarks and gluons: hadrons, which make up most of the visible matter in the present-day universe; and the quark–gluon plasma, which is thought to have existed in the early universe and can be recreated in heavy-ion collisions at the Large Hadron Collider (LHC). By studying charmed particles, physicists can learn more about hadrons, in which quarks are bound by gluons, as well as the quark–gluon plasma, in which quarks and gluons are not confined within hadrons.

The main results are:

The LHCb team obtained the most precise yet measurements of two properties of a particle known as χc1(3872), a hadron containing charm quarks. The particle was discovered in 2003 and it has remained unclear whether it is a two-quark hadron, a more exotic hadron such as a tetraquark – a system of four quarks tightly bound together – or a pair of two-quark particles weakly bound in a molecule-like structure. Pinning down the nature of this hadron could extend physicists’ understanding of how quarks bind into hadrons. “Our results are consistent with χc1(3872) being a pair of two-quark particles loosely bound together, but it does not fully rule out the tetraquark hypothesis or other possibilities,” says LHCb spokesperson Giovanni Passaleva.

The CMS collaboration observed for the first time the transformation, or “decay”, of another particle, called B0s, into the same χc1(3872) particle. The researchers compared this decay with the previously observed decay of the B+ meson, which had led to the first detection of the χc1(3872) in 2003. Both types of decay link the behaviour of this hadron to the up and strange quarks. “Measured differences in the decay rates are intriguing and could provide further insight into the nature of the χc1(3872), which has not yet been fully established,” says CMS spokesperson Roberto Carlin.

Looking forward, the LHC collaborations aim to make more precise measurements of these messengers of the quark world using data from the next LHC run, which will benefit from largely upgraded experiment set-ups.

Read more below for a comprehensive description of these results.

The LHCb and CMS collaborations describe results from their studies of a hadron known as χc1(3872). The particle was discovered in 2003 by the Belle experiment in Japan but it has remained unclear whether it is a two-quark hadron, a more exotic hadron such as a tetraquark – a system of four quarks tightly bound together – or a pair of two-quark particles weakly bound in a molecule-like structure.

Pinning down the nature of χc1(3872) could extend physicists’ understanding of how quarks bind into hadrons. The new studies by the CMS and LHCb collaborations shed new light on – but do not yet fully reveal – the nature of this particle.

Using sophisticated analysis techniques and two different datasets, the LHCb team obtained the most precise measurements yet of the particle’s mass and determined for the first time and with a significance of more than five standard deviations the particle’s “width”, a parameter that determines the particle’s lifetime.

Until now researchers had only been able to obtain upper limits on the allowed values of this parameter. The LHCb researchers detected χc1(3872) particles in their datasets using the classic “bump”-hunting technique of searching for an excess (the bump) of collision events over a smooth background. Each dataset led to a measurement of the mass and width, and the results from both datasets agree with each other.

“Our results are not only the most precise yet, they also show that the mass of χc1(3872) is remarkably close to the sum of the masses of the D0 and D*0 charmed mesons,” says LHCb spokesperson Giovanni Passaleva. “This is consistent with χc1(3872) being a pair of two-quark particles loosely bound together, but it does not fully rule out the tetraquark hypothesis or other possibilities.”

Meanwhile, analysing a large dataset recorded over the course of three years, the CMS collaboration observed for the first time the transformation, or “decay”, of the B0s particle into the χc1(3872) and a ϕ meson. This two-quark particle, B0s, is a relative of the B+ meson, in the decay of which the Belle experiment first detected χc1(3872). Like the LHCb team, the CMS team detected χc1(3872) using the bump technique.

“Our result is particularly interesting because we found that the rate at which the B0s decays to the hadron χc1(3872) and the ϕ meson is similar to that of the B0 into χc1(3872) and an anti-K0 meson, whereas it is about twice as low as that for the previously observed B+ decay into χc1(3872) and the K+ meson,” says CMS spokesperson Roberto Carlin. “In these decays, different quarks, other than the bottom quark, play a role,” Carlin explains. “The fact that the decay rates do not follow an obvious pattern may shed light on the nature of χc1(3872).”

At the other end of the quark-binding spectrum, the ALICE collaboration measured the so-called elliptic flow of hadrons containing a charm quark, either bound to a light quark (forming a D meson) or to an anticharm (making a J/ψ meson) in heavy-ion collisions. Hadrons containing heavy quarks, charm or bottom, are excellent messengers of the quark–gluon plasma formed in these collisions. They are produced in the initial stages of the collisions, before the emergence of the plasma, and thus interact with the plasma constituents throughout its entire evolution, from its rapid expansion to its cooling and its eventual transformation into hadrons.

When heavy nuclei do not collide head on, the plasma is elongated and its expansion leads to a dominant elliptical modulation of the hadrons’ momentum distribution, or flow. The ALICE team found that, at low momentum, the elliptic flow of D mesons is not as large as that of pions, which contain only light quarks, whereas the elliptic flow of J/ψ mesons is lower than both but distinctly observed.

“This pattern indicates that the heavy charm quarks are dragged by the quark–gluon plasma’s expansion,” says ALICE spokesperson Luciano Musa, “but likely to a lesser extent than light quarks, and that both D and J/ψ mesons at low momentum are in part formed by the binding, or recombination, of flowing quarks.”

Another measurement performed by the ALICE team – of the flow of electrons originating from decays of B hadrons, containing a bottom quark – indicates that bottom quarks are also sensitive to the elongated shape of the quark–gluon plasma. Upsilon particles, which are made up of a bottom quark and its antiquark, as opposed to a charm and anticharm like the J/ψ, do not exhibit significant flow, likely because of their much larger mass and the small number of bottom quarks available for recombination.

Read more on the CMS and LHCb websites: