CERN congratulates Englert and Higgs on Nobel in physics 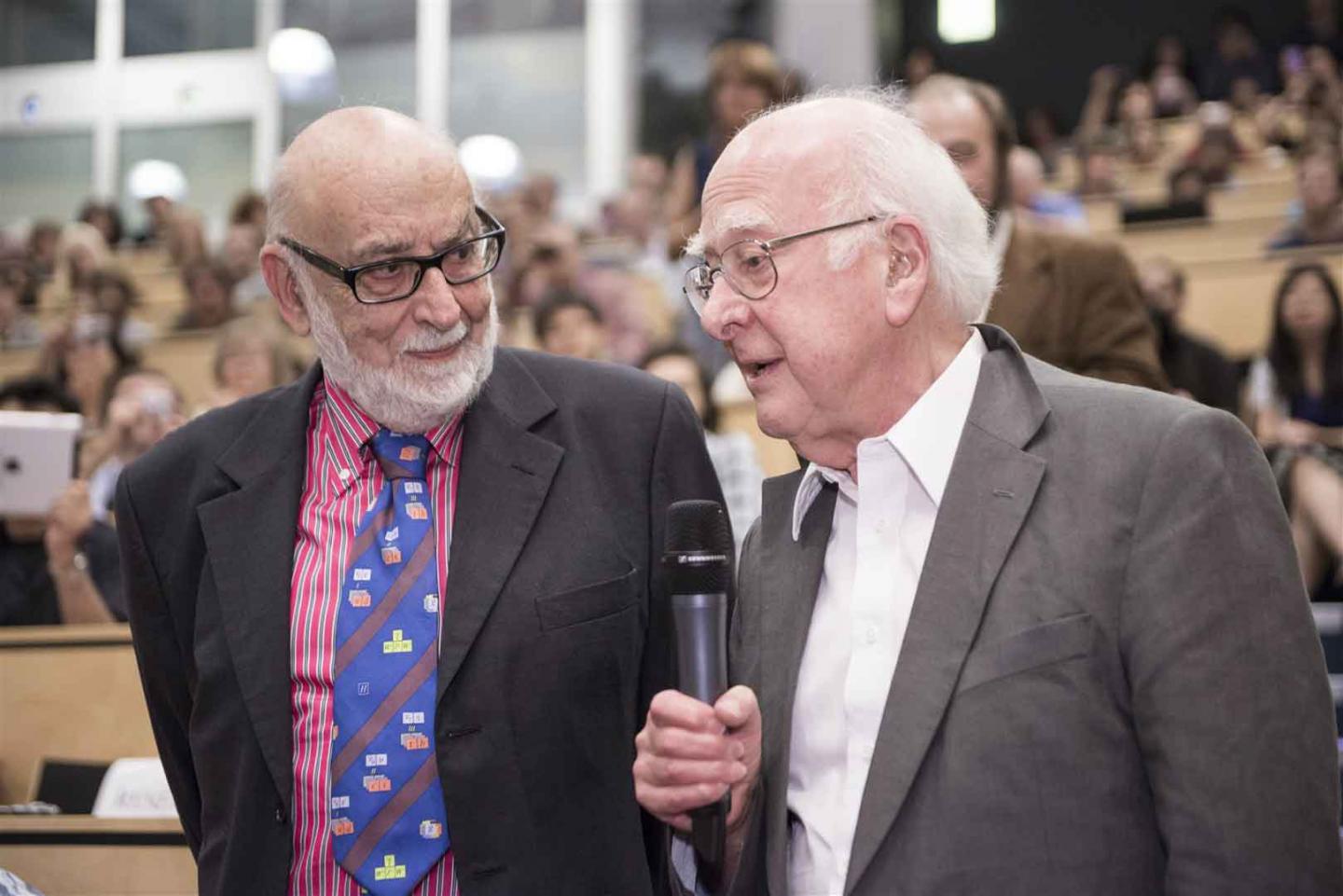 François Englert (left) and Peter Higgs at CERN on 4 July 2012, on the occasion of the announcement of the discovery of a Higgs boson by the ATLAS and CMS experiments (Image: Maximilien Brice/CERN)

CERN congratulates François Englert and Peter W. Higgs on the award of the Nobel prize in physics “for the theoretical discovery of a mechanism that contributes to our understanding of the origin of mass of subatomic particles, and which recently was confirmed through the discovery of the predicted fundamental particle, by the ATLAS and CMS experiments at CERN’s Large Hadron Collider.” The announcement by the ATLAS and CMS experiments took place on 4 July last year.

“I’m thrilled that this year’s Nobel prize has gone to particle physics,” says CERN Director-General Rolf Heuer. “The discovery of the Higgs boson at CERN last year, which validates the Brout-Englert-Higgs mechanism, marks the culmination of decades of intellectual effort by many people around the world.” Members of the ATLAS and CMS collaborations react with jubilation at CERN as the announcement is made (Image: Maximilien Brice/CERN)

The Brout-Englert-Higgs (BEH) mechanism was first proposed in 1964 in two papers published independently, the first by Belgian physicists Robert Brout and François Englert, and the second by British physicist Peter Higgs. It explains how the force responsible for beta decay is much weaker than electromagnetism, but is better known as the mechanism that endows fundamental particles with mass. A third paper, published by Americans Gerald Guralnik and Carl Hagen with their British colleague Tom Kibble further contributed to the development of the new idea, which now forms an essential part of the Standard Model of particle physics. As was pointed out by Higgs, a key prediction of the idea is the existence of a massive boson of a new type, which was discovered by the ATLAS and CMS experiments at CERN in 2012.

The Standard Model describes the fundamental particles from which we, and all the visible matter in the universe, are made, along with the interactions that govern their behaviour. It is a remarkably successful theory that has been thoroughly tested by experiment over many years. Until last year, the BEH mechanism was the last remaining piece of the model to be experimentally verified. Now that it has been found, experiments at CERN are eagerly looking for physics beyond the Standard Model.

The Higgs particle was discovered by the ATLAS and CMS collaborations, each of which involves over 3000 people from all around the world. They have constructed sophisticated instruments – particle detectors – to study proton collisions at CERN’s Large Hadron Collider (LHC), itself a highly complex instrument involving many people and institutes in its construction.

CERN will be holding a press conference at 2pm CET today in the Globe of Science and Innovation. For those unable to attend, it will be webcast. Media questions can be submitted by Twitter using the hashtag #BosonNobel.