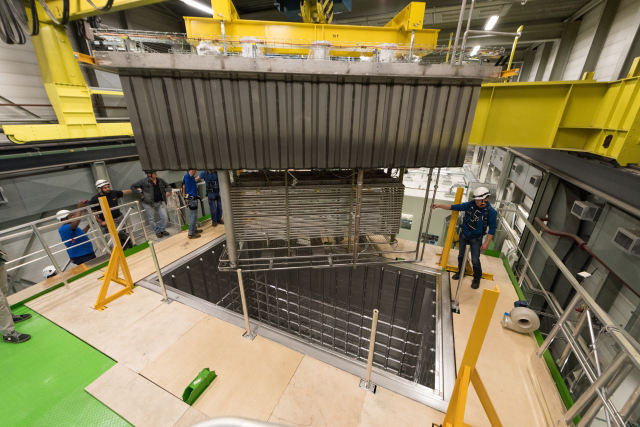 The activities under way in the framework of the CERN Neutrino Platform are multiple and restless. Along with the refurbishment of ICARUS, another project is making great strides towards its completion: WA105. In spite of the not-so-expressive name, the technology being tested in this prototype is unprecedented.

WA105, presently at an advanced state of assembly at CERN, is a 3x1x1-metre, 25-tonne “dual-phase” liquid argon time projection chamber (DLAr-TPC) demonstrator. It has been conceived in the quest to solve the technological problems related to the next generation of neutrino detectors, whose dimensions need to be gigantic in order to thoroughly study the phenomenon of neutrino oscillations. Indeed, a major new international project called DUNE (Deep Underground Neutrino Experiment), will be made up of four such detectors, each one measuring approximatively 60x12x12 metres – that is, 50 times the size of ICARUS.

The dual-phase technology was developed by the European LAGUNA-LBNO consortium, with R&D efforts led by ETH Zurich for more than a decade. In a DLAr chamber, a region of gaseous argon resides above the usual liquid phase. Ionisation electrons drift up through the detector volume and are accelerated into the gaseous region near the top of the cryostat by a strong electric field. Here, large electron multipliers (LEM) amplify the signals by a factor of about 20 (that is, for every drifted electron, 20 electrons are produced), while a multilayer anode plane collects the charged particles and provides the spatial read-out. This type of detector has several technical advantages over the ICARUS-like, single-phase liquid argon TPC: the electrons can be drifted over a longer distance, the chamber is robust against sources of environmental electronic noise, and the efficiency of the three-dimensional reconstruction of the event is enhanced because the amplified charge signals can be shared between two independent charge collection planes.

The second demanding engineering task is connected to the cryostats of giant next-generation neutrino detectors. The solution has been found in the technology of tank ships transporting liquefied natural gas (LNG carriers). CERN is collaborating with the French enterprise Gaztransport & Technigaz (GTT), which owns the patent for a membrane-type containment system, whereby two cryogenic liners support and insulate the LNG cargo. The advantage of this system is that it’s modular and it can be assembled to encase a large volume.

“For the cryogenic system, we also took advantage of CERN’s long-standing know-how on the subject and close cooperation between the cryogenics teams at CERN and Fermilab,” says André Rubbia, spokesperson of the WA105 project and co-spokesperson of the DUNE collaboration. “In order for the TPC to operate properly and drift electrons over long distances, an extreme degree of purity better than 0.1 parts-per-billion of the liquid argon is required,” he continues. “The membrane cryostat is vital to insulate the volume from external air penetration and an effective cryogenic purification system is needed to prevent contamination from internal material.”

The WA105 demonstrator has recently been inserted into the cryostat and the plan is to have it ready for operation in October 2016. This milestone will be a very important step for the DLAr-TPC, which so far has only been demonstrated on prototypes up to 250 litres. The next step will be to test a larger (300-tonne), full-scale engineering prototype for DUNE in the EHN1 test facility extension currently under construction in the North Area at CERN.

“After a decade of R&D efforts, the CERN Neutrino Platform is playing a very important role,” Rubbia underlines. “It enabled the speeding up of the activities, also by attracting the manpower needed, and finally permitted the transition from laboratory R&D to the industrial-scale production needed for the next generation of long-baseline neutrino experiments,” he concludes.