With the connection between ELENA and GBAR already in place, the commissioning of the decelerator with antiprotons is about to begin 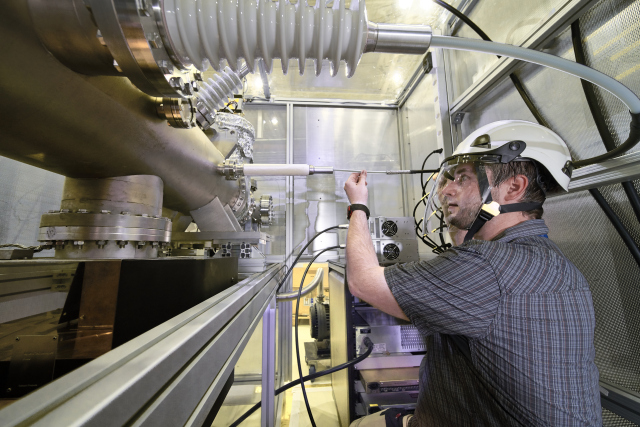 Audric Husson working on GBAR’s antiproton decelerator, which his team developed and installed and is now commissioning. (Image: Max Brice/CERN)

If matter falls down, does antimatter do the same? GBAR (Gravitational Behaviour of Antihydrogen at Rest), the experiment that will give us the answer, has just had a brand new part installed – an antiproton decelerator.

Located in the Antiproton Decelerator (AD) hall, GBAR will measure the freefall acceleration of antihydrogen atoms within Earth’s gravitational field. To do that, something special has to be created first – antihydrogen ions, each consisting of one antiproton surrounded by two positrons. While these particles are very hard to produce, they are significantly easier to manipulate than antihydrogen atoms thanks to their positive charge.

The first ingredient of the antihydrogen ions – the antiprotons – will be supplied by the new ELENA (Extra Low Energy Antiproton) deceleration ring. The lower their energy, the bigger the probability that antihydrogen ions will form, so the beam coming from ELENA at 100 KeV will be further slowed down to just 1 KeV by the newly installed GBAR antiproton decelerator.

The second ingredient – the positrons – will be created with the help of the GBAR linear accelerator installed earlier in 2017.

A week after the first antiprotons circulated in ELENA, an antiproton extraction line was installed between that deceleration ring and the GBAR decelerator.

In the coming months, the first antiprotons will fly out of ELENA into GBAR, which will be the first of five experiments in the AD hall to receive a beam from ELENA.

In the meantime, both the decelerator and the linac will be carefully prepared for the first phase of the experiment, which is dedicated to the creation of the first antihydrogen ions. “Beam path, energy and the efficiency of the system are the three things we will measure to make sure that the antiproton beam behaves the way we expect. We need to know the exact number of antiprotons in the bunch and how their energy diminishes while passing through the decelerator’s chambers,” explains Audric Husson, a member of the team that developed and installed the new part, and currently in charge of its commissioning.

The rest of the equipment needed to measure the freefall of the antihydrogen atoms will be installed by the end of 2018. The first data might even be taken before Long Shutdown 2, due to start in January 2019, during which the accelerator complex will be closed for upgrades.