Groundbreaking for an international neutrino experiment

Works have started today, in the USA, for the LBNF facility that will host giant neutrino detectors. Their prototypes are being developed at CERN. 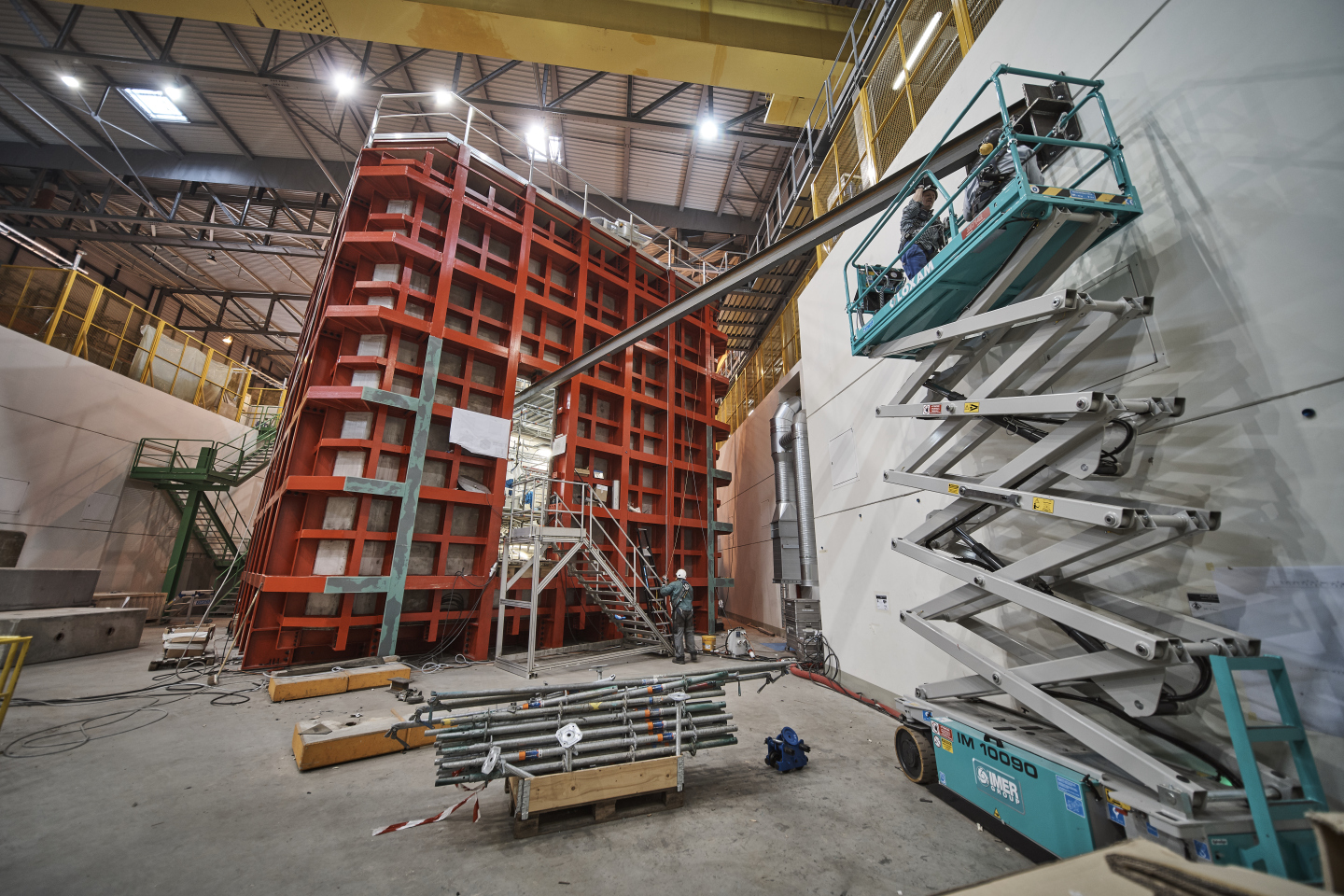 This 11-metre-high prototype at CERN will refine neutrino detector technology. The final DUNE detectors will be 20 times larger than this prototype and located in the new LBNF cavern in the United States. (Image: M. Brice, J. Ordan/CERN)

Today, construction started on an international mega-science facility that will employ the expertise of CERN to study the properties of neutrinos; ghostly fundamental particles that play by an unknown set of rules. The 1.6km-deep experimental cavern is part of the Long Baseline Neutrino Facility, an international research centre located in the United States that will eventually host four giant neutrino detectors. Researchers at CERN are currently building prototypes for these detectors and experimenting with new technologies that will enhance our pictures of these ghostly cosmic nomads.

“Some of the open questions in fundamental physics today are related to extremely fascinating and elusive particles called neutrinos,” says CERN’s Director-General Fabiola Gianotti. “The Long-Baseline Neutrino Facility in the United States, whose start of construction is officially inaugurated with today’s ground-breaking ceremony, brings together the international particle physics community to explore some of the most interesting properties of neutrinos.’

Neutrinos are among the most abundant fundamental particle in the universe, but little is known about them because they rarely interact with ordinary matter. Previous research has shown that neutrinos play by a different set of rules than all other particles, giving scientist hope that neutrinos might be the key to many lingering questions about the origin and evolution of the cosmos.

“Studying neutrinos could provide answers to some major mysteries in physics, such as why is the Universe made entirely of matter and not antimatter,” says Filippo Resnati, a CERN researcher working at the Neutrino Platform. “We need a powerful neutrino beam and huge detectors if we want to measure and understand their properties.”

Neutrinos can traverse thousands of kilometers through rock and dirt before bumping into a terrestrial atom. While this aloofness makes neutrinos incredibly difficult to detect, it is also the principle underlying the Deep Under Ground Neutrino Experiment, which will be the first tenant in the new LBNF cavern. As neutrinos travel, they change their properties—a phenomenon which is little understood. The LBNF/DUNE Experiment will catch and measure neutrinos generated by a proton beam at Fermilab near Chicago, Illinois, before and after their 1300km subterranean sprint to Sanford Lab located in Lead, South Dakota. CERN’s Neutrino Platform is hosting an international community of researchers as they design and build prototypes for DUNE’s far detectors.

“Building and testing large prototypes is a necessary intermediary step for a project as massive as LBNF/DUNE,” Marzio Nessi, the head of CERN’s Neutrino Platform saiys. “We’re figuring out how to adapt the existing technology to thrive inside a house-sized detector. Once we’ve proven that it can work, we will then scale it up by a factor of 25 for the final DUNE detectors.”

The CERN prototypes are refining a detection technology originally developed by Carlo Rubbia, a Nobel prize winning physicist and former CERN Director General. Hatched panels of delicate wires and photon sensors record the electrical and light signals generated by neutrinos as they crash into argon atoms. This information enables physicists to triangulate the positions of neutrinos and measure their properties. These panels will be submerged in liquid argon in one prototype, and the other prototype will test a newer technology which uses electron multipliers suspended in argon vapor.

In addition to building and testing the detector prototypes for LBNF/DUNE, CERN will serve as the European hub for neutrino physicists working on research based in the United States and elsewhere in the world. CERN has a rich history of neutrino research and contributed to past discoveries, such as the direct observation of neutrino shape-shifting made by the OPERA experiment at Gran Sasso laboratory in Italy. CERN also provides the infrastructure for DUNE researchers to build and test their detectors using CERN’s test beam facility. This is the first-time CERN joins projects located in the United States, with an active role designing final DUNE detectors and building the cryogenics infrastructure.

“Things are changing,” Resnati said. “CERN’s mission is to seek answers to the big questions in physics, and we want to be part of this worldwide quest for knowledge. We’re pulling together as a global community of physicists and making it happen.”

The groundbreaking ceremony at Sanford Lab in South Dakota starting at 11:20 pm CEST will be webcast. Watch the webcast!