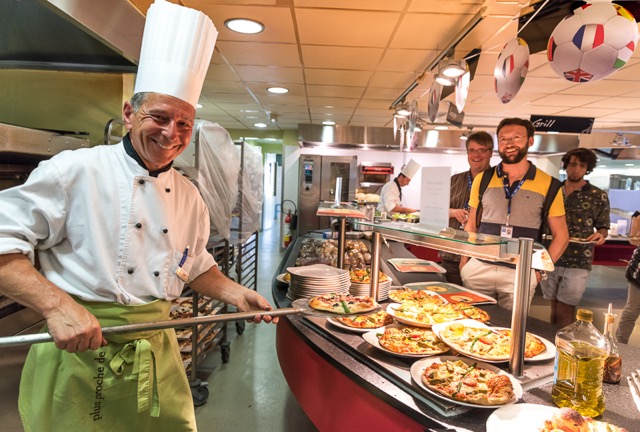 What do the Higgs boson and a pizza have in common? Pierluigi Paolucci, INFN and CMS collaboration member, together with INFN president Fernando Ferroni found out the answer one day in Naples: the pizzas in front of them looked exactly like two Higgs boson event displays.

A special recipe was then created in collaboration with the chef of the historic “Ettore” pizzeria in the St. Lucia area of Naples, and two pizzas were designed to resemble two Higgs boson decay channel event displays.

The “Higgs Boson Pizza Day” was held on Monday, 4 July 2016, on the fourth anniversary of the announcement of the discovery of the Higgs boson at CERN. On this occasion, more than 400 pizzas were prepared and served at lunchtime in Restaurant 1.

For all pizza lovers who want to learn more about the Higgs boson, here is the recipe and the explanation of the culinary physics behind the pizzas.