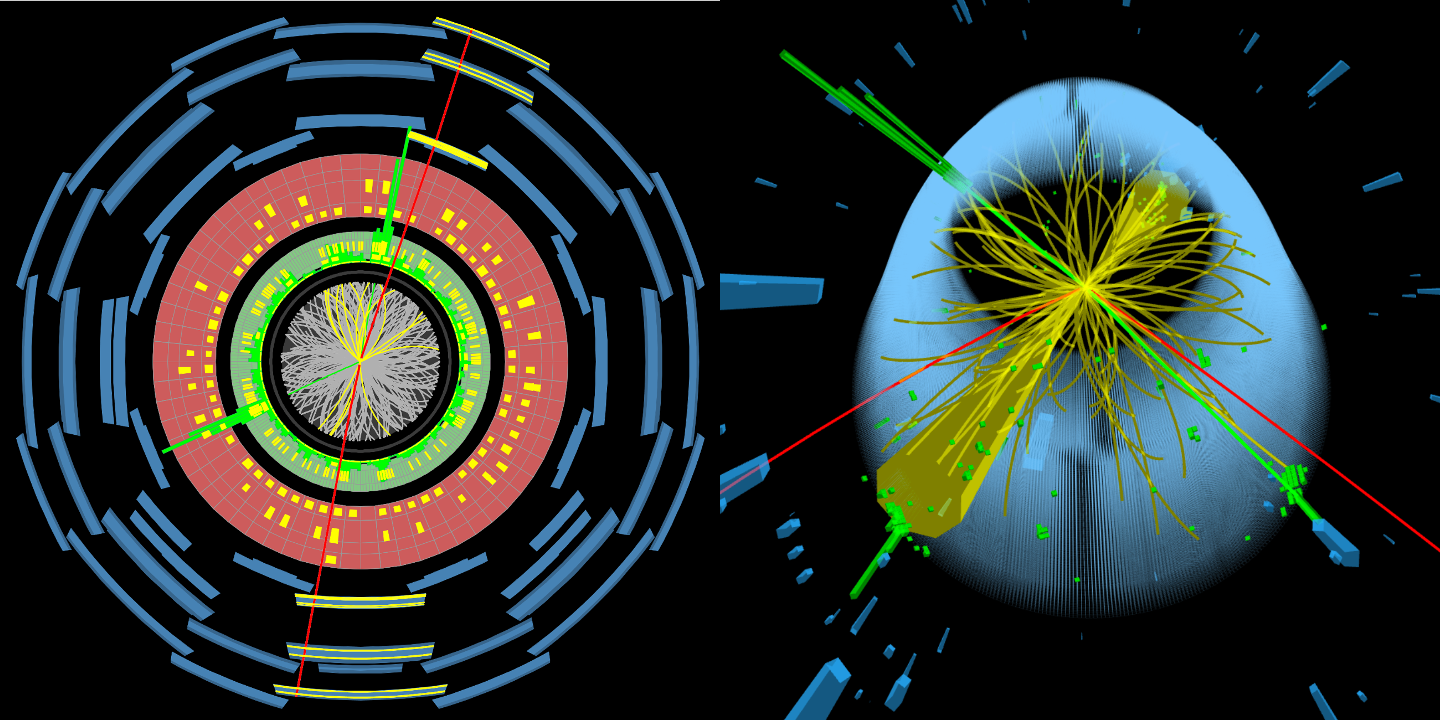 Nearly six years after its discovery by the ATLAS and CMS experiments at the Large Hadron Collider (LHC) at CERN, the Higgs boson remains in the spotlight at particle physics conferences. At the 53rd annual Rencontres de Moriond conference taking place between 10 and 24 March 2018 in La Thuile in the Aosta Valley in Italy, ATLAS and CMS have unveiled a suite of new measurements of the properties of the scalar boson associated with the Brout-Englert-Higgs field. These results come from the examination of data from proton-proton collisions at an energy of 13 TeV that the LHC delivered in 2015 and 2016. The data sets used by ATLAS and CMS each contained around two million Higgs bosons, of which around 10,000 were readily accessible to the detectors.

Since all elementary particles gain their respective masses through interactions with the Brout-Englert-Higgs field, studying how these particles interact with the Higgs boson itself is of the utmost importance. CMS and ATLAS studied the various processes through which the Higgs bosons are produced in proton-proton collisions and the different transformations they subsequently undergo. Their experimental observations demonstrated good agreement with the theoretical predictions from the Standard Model of particle physics.

When a Higgs boson – a heavy and unstable particle – is produced in interactions between colliding protons, it transforms (or “decays”) almost instantaneously into lighter and more-stable particles; these transformations may involve intermediary particles and each type of transformation is called a “decay channel”. However, these lighter particles may also have been produced by known and well-understood processes, which make up the background when looking for rarer particles like the Higgs boson. Detectors such as ATLAS and CMS are designed to identify the end products of such decays, using this information to determine the source particle that was produced in the collisions and separate the source particle’s signal from the background of known processes.

The new data enable physicists to examine individual decay channels even more closely to probe the fundamental laws of the universe and search for signs of physics beyond the Standard Model. One way to do so is to look for subtle deviations from theoretical predictions, which might arise, for example, due to the unaccounted-for presence of particles of dark matter. To look for such deviations, physicists consider two parameters for the different decay channels. The first is a channel’s decay likelihood, which is the probability of a given heavy particle following one particular decay channel out of several possibilities. For instance, around one in five Higgs bosons will transform into two W bosons. The second parameter is the rate at which certain interactions between colliding protons produce the Higgs boson in the first place; it is determined by studying properties such as the momenta and the angle of flight of the particles detected by the experiments or by identifying instances where additional particles are produced along with the Higgs boson.

In the context of these parameters, ATLAS presented an important result for two specific production modes each involving decays into two W bosons. The number of Higgs bosons counted by ATLAS that followed these production-and-decay paths is in strong agreement with the number expected according to the Standard Model. ATLAS also combined data from the two “cleanest” Higgs decay channels (to pairs of photons and to pairs of Z bosons) and measured with unprecedented precision the variations in Higgs production rates in these channels versus properties such as the momenta of the decay end-products. Furthermore, ATLAS presented searches for Higgs decays to particles not present in the Standard Model – such as “dark” Z bosons – which might herald the discovery of particles of dark matter. They did not find evidence for a decay to “dark” Z bosons in the current data.

Similarly, CMS examined five prominent decay channels (where the Higgs boson transforms into pairs of: W bosons, Z bosons, photons, tau (τ) leptons or b quarks), and compared their production rates and their decay likelihoods with the predictions from the Standard Model. CMS obtained a result about 17% above the predictions, which is compatible with the Standard Model but not perfectly so; more scrutiny of these measurements with additional data is needed before drawing further conclusions. CMS also looked for Higgs decays to forms of “invisible” matter but found no evidence for these processes at the present level of sensitivity.

Both experiments also presented strong evidence for instances where a Higgs boson is produced along with a pair of top quarks. Studying these instances allows scientists to probe the interactions between the two heaviest elementary particles we know of.

ATLAS and CMS also measured the mass of the Higgs boson with a precision up to 12% higher than before, using advances in analysis techniques combined with larger data sets available thanks to the exceptional performance of the LHC in the last few years. Their measurements of the Higgs mass are 124.98 ± 0.28 GeV and 125.26 ± 0.21 GeV respectively.

All presentations from ATLAS and CMS, as well as results from ALICE and from LHCb, can be found on the Moriond conference websites: Electroweak physics and QCD physics. The LHC experiments are now preparing their detectors to receive 2018’s first collisions, which are expected in April.

Read more about these results: