Hunting season at the LHC

With the LHC now back smashing protons together at an energy of 13 TeV, what exotic beasts do physicists hope to find? 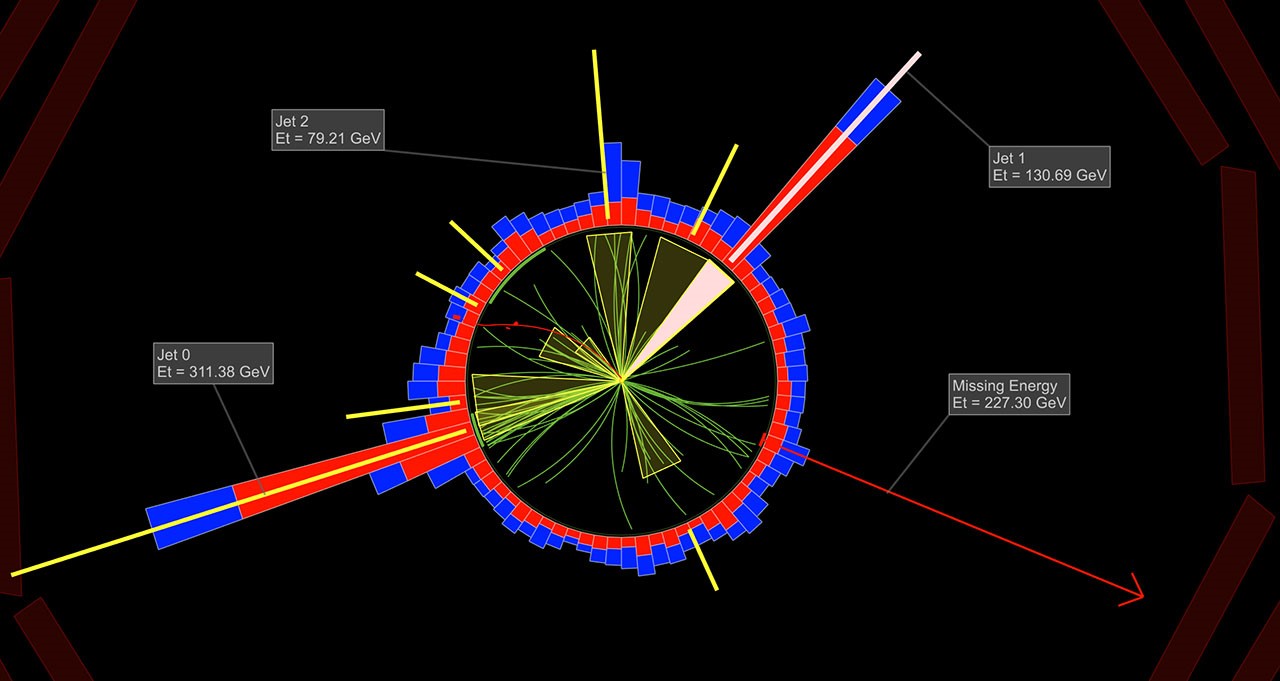 Like hunters following the tracks of their prey, physicists compare real collision data with simulations of what they expect to see if a new particle is produced and decays in their detectors. (Supersymmetry simulation image: the CMS collaboration)

With the LHC now back smashing protons together at an energy of 13 TeV, what exotic beasts do physicists hope to find in this unfamiliar corner of the natural world?

Among the top priorities for the LHC experiments this year is the hunt for new particles suspected to lurk at the high-energy frontier: exotic beasts that do not fit within the Standard Model of particle physics and could lift the lid on an even deeper theory of nature’s basic workings.

Following the discovery of the Higgs boson five years ago, which was the final missing piece of the Standard Model of particle physics, physicists have good reason to expect that new particle species lie over the horizon. Among them is the mystery of what makes up dark matter, why the Standard Model particles of matter weigh what they do and come in three families of two, and, indeed, why the Higgs boson isn’t vastly heavier than it is – that is, why it isn't so heavy that it could have ended the evolution of the universe an instant after the Big Bang.

These outlandish prey are just a few of the known unknowns for physicists. To ensure that no corner of the new-physics landscape is left unturned, the LHC experiments also employ a model-independent approach to search for general features such as pairs of high-energy quarks and leptons or for unexplained sources of missing energy.

Their most elusive quarry might not light up their detectors at all, forcing the LHC exploration teams to adopt stealth approaches, such as making ultra-precise measurements of known Standard Model processes and seeing if they diverge from predictions. While physicists are hoping for a clear shot at any new particle species – a distinctive “bump” in the data that can only be explained by the presence of a new, heavy particle – they could be faced with a mere rustling in the undergrowth or other indirect signs that something is awry. This quest is not just the preserve of all of the LHC experiments, but also of numerous other experiments at CERN that are not linked to the LHC.

Either way, physicists exploring this uncharted territory of the high-energy frontier have to take extreme care not to get tricked by numerous Standard Model doppelgängers or be teased by inconclusive statistics. Even after an exotic new beast has been snared statistically and it seems that the LHC experiments have a discovery on their hands, so begins the task of identifying what the beast really is: a mere mutant or close relative of a species we already know? Or the first glimpse of a new subatomic kingdom?

Ranging from the bizarre to the mind-boggling, and in no particular order, below is a summary of some of the quantum creatures that are in the LHC experimentalists’ sights this year.