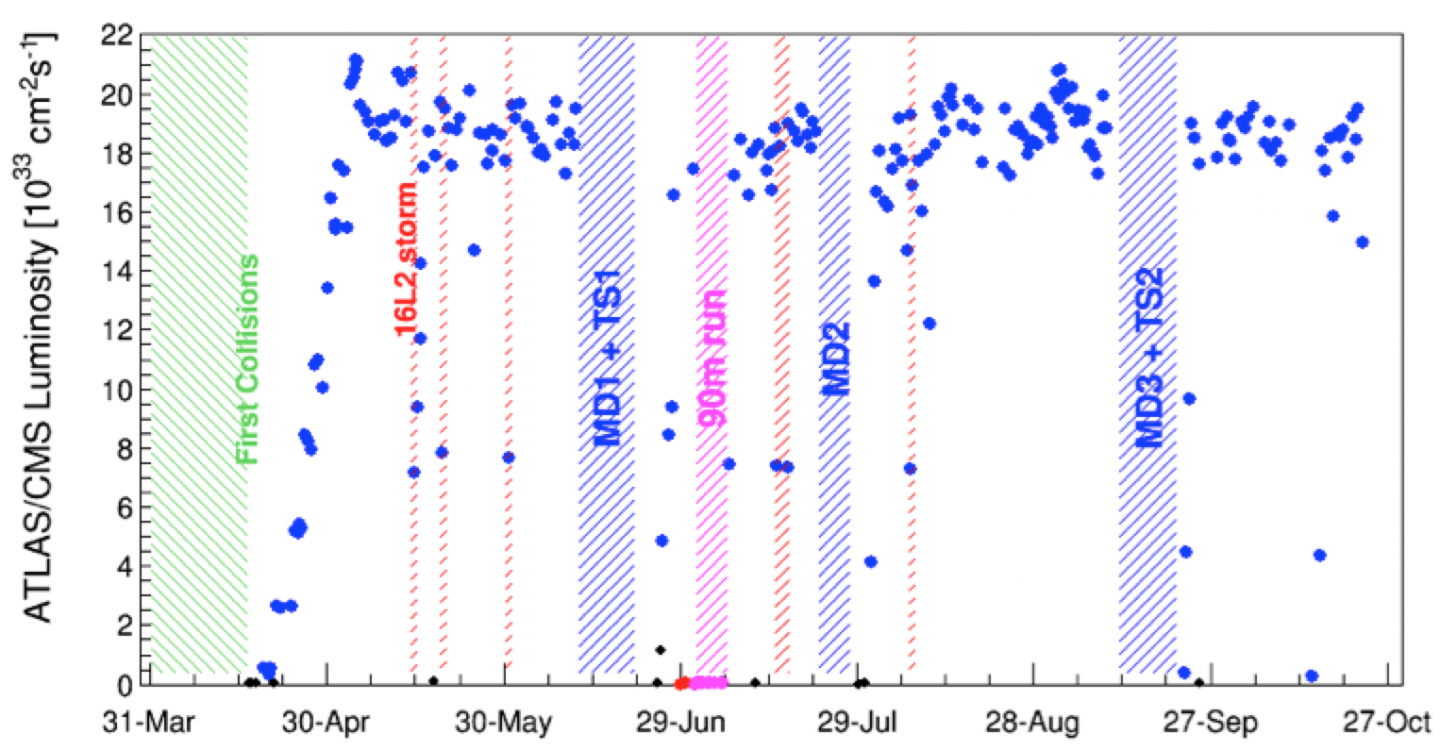 The peak luminosity of each fill in 2018, showing that most of the time the fills started with a peak luminosity close to 2x10^34 cm-2 s-1. After each technical stop or MD period, there is a period of intensity ramp up to ensure the machine runs safely.

At 6.01 a.m. on 24 October, the LHC Operations team flipped the switch in the LHC island of the CERN Control Centre to dump the last proton production fill of LHC Run 2 (2015-2018). This 242nd physics fill of 2018 was in collision for about 13.5 hours, producing a final integrated luminosity of 0.46 fb-1, bringing ATLAS and CMS to a total integrated luminosity of 66 fb-1 in 2018, more than the 60 fb-1 forecasted. This record integrated luminosity was achieved thanks to the high machine availability and the stable beam ratio (beyond 50%).

In addition, the machine and beam performance allowed nearly every fill to run with a peak luminosity of about 2 x 1034 cm-2 s-1, which is a factor of two higher than the LHC design luminosity (1 x 1034 cm-2 s-1). The total integrated luminosity since the beginning of LHC operation is now 189.3 fb-1 for each of ATLAS and CMS, of which 160 fb-1 were accumulated during Run 2 alone.

This peak luminosity is not relevant to the LHCb and ALICE experiments, which aim for a low number of collisions per bunch crossing and whose luminosity is therefore deliberately levelled to a much lower value. They are interested in a maximum number of bunches colliding in their experiments and a long stable beams time. Thanks to the high machine availability, they also managed to accumulate more luminosity than anticipated. The 2018 forecast for LHCb was 2 fb-1, but the experiment actually received 2.46 fb-1. ALICE completed its proton run with an integrated luminosity of 27.3 pb-1.

These accomplishments would not have been possible without the excellent performance of the injector chain during the 2018 run. The beams produced in the injectors required continuous attention in order to keep their brightness high, much higher than originally anticipated in the LHC design report, which made a major contribution to the high peak luminosity in the LHC.

Immediately after the 24 October beam dump, the Machine Development (MD) teams were in the starting blocks to take over the machine for a dense and interesting programme of machine and beam studies that will end on 31 October. A short three-day technical stop will then allow the experiments to prepare their detectors for the ion run, for which final preparatory activities will start on 3 November. The beginning of physics with lead-ion collisions is scheduled for 8 November.

The lead-ion injector chain differs slightly from the proton one and is composed of LINAC3, which will make multiple injections into the LEIR, where the ions will be accumulated, cooled and accelerated before being transferred to the PS. The PS will then through RF manipulations create a bunch spacing of 100 ns between 4 bunches and accelerate them further before sending them to the SPS, where up to 12 PS batches (each composed of 4 bunches spaced by 100 ns) will be injected and where the energy will be further boosted before the injection of the beam into the LHC. This means that LINAC2 and the PS Booster are not required for the lead-ion run. They will be stopped on 12 November for the Long Shutdown 2 (LS2) activities in preparation for the connection of LINAC4.