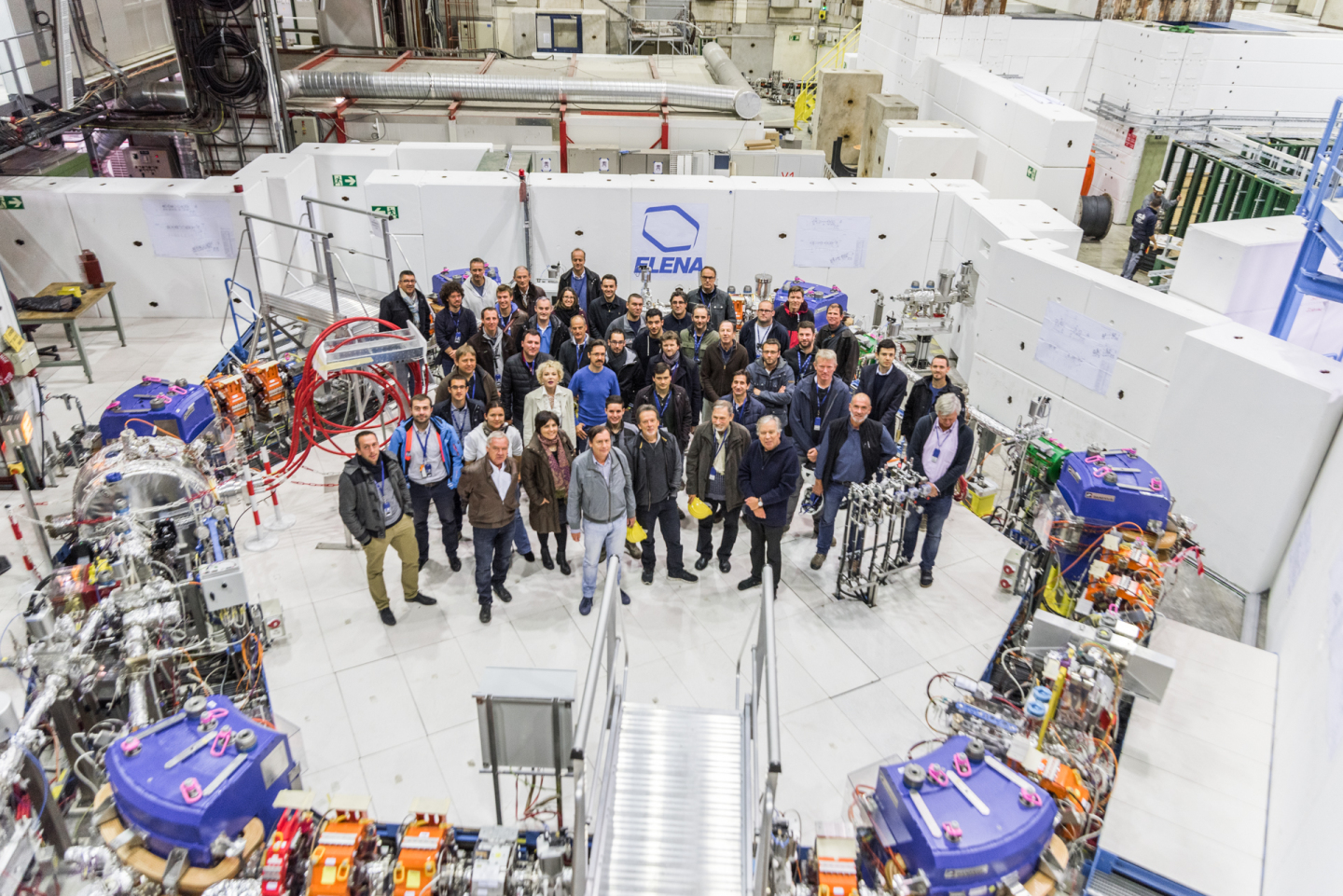 The members of the ELENA project stand in front of the new decelerating ring (Image: Sophia Bennett/CERN)

With a circumference of just 30 metres, it looks a bit like a miniature accelerator. But don’t be mistaken, ELENA has all the components of a bigger machine. Tests with beam of this brand-new accelerator for antimatter experiments began in mid-November. The first beam circulated on 18 November. “Starting the machine up with beam is an interesting and crucial phase of the project. The coming weeks will show us if everything is working as planned,” explains Christian Carli, ELENA project leader.

The ELENA (Extra Low ENergy Antiproton) deceleration ring will be connected to the Antiproton Decelerator (AD) as of next year. The 182-metre-circumference AD supplies antimatter experiments with antiprotons at 5.3 MeV, the lowest energy possible in a machine of this size.

The slower the antiprotons (i.e. the less energy they have) the easier it is for the experiments to study them or to manipulate them in order to produce antihydrogen atoms, for example. ELENA will reduce the energy of antiprotons from the AD by a factor of 50, to just 0.1 MeV. In addition, the density of the beams will be improved. The number of antiprotons that can be trapped will be increased by a factor of 10 to 100, improving the efficiency of the experiments and paving the way for new experiments.

But at low energy and low intensity, other difficulties arise. “The beam is a lot more sensitive to external interference, such as the earth’s magnetic field, which modifies its orbit,” explains François Butin, the technical coordinator in charge of the installation.

To counteract these effects, the designers of ELENA worked on several technical parameters. The magnets were the subject of particularly intense studies, as at such low energies the magnetic fields are inevitably weak. The hysteresis of the iron in the magnet (in other words, the residual magnetism) can compromise the quality of the field.  ELENA is therefore equipped with magnets that have been optimised to operate with very weak fields.

The circumference of the ring was a compromise between various constraints. It needed to be small enough to allow the magnetic fields to be more intense in order to counteract the effects of external interference, but also big enough to house all the necessary components. “The small size of the ring meant that we had to be particularly inventive as well as precise when fitting in all the components,” says François Butin.

Other challenges that had to be overcome included updating the beam instrumentation in order to be able to operate at low intensity and low energy. The vacuum system is also impressive, producing very low pressure, around 10-12 millibar.

The teams working on commissioning the machine will continue the tests with beam. In parallel, GBAR, the first experiment that will be connected to ELENA, is in the process of being assembled. GBAR will study the effect of gravity on antimatter, following in the footsteps of AEGIS and soon also ALPHA.

The other experiments will be connected during the second long shutdown of CERN’s accelerators in 2019-2020. ELENA will be able to supply antiprotons to four experiments in parallel.

For more information you can read the CERN Courier article.