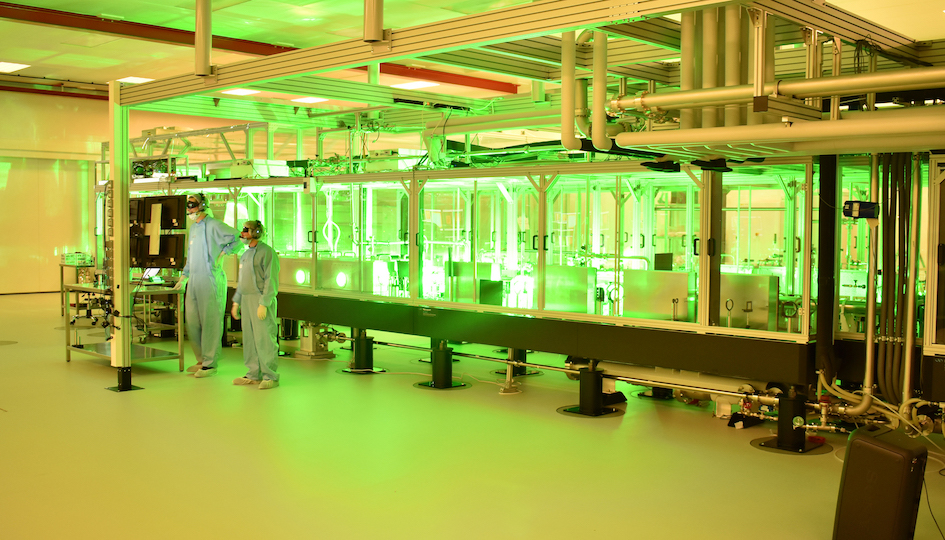 This year’s Nobel Prize in Physics recognised two groundbreaking inventions in laser physics. Half of the prize went to Arthur Ashkin of Bell Laboratories in the US for his work on optical tweezers, while the other half was awarded jointly to Gérard Mourou of the École Polytechnique in Palaiseau, France, and Donna Strickland of the University of Waterloo in Canada “for their method of generating high-intensity, ultra-short optical pulses”.

Mourou and Strickland’s technique, called chirped pulse amplification (CPA), opens up new perspectives in particle physics. Proposed in 1985 and forming the foundation of Strickland’s doctoral thesis, CPA stretches out in time (or “chirps”) laser pulses to reduce their peak power, then amplifies and, finally, compresses them, boosting their intensity. The technique underpins today’s high-power lasers and is used worldwide for applications such as eye surgery and micro-machining.

But CPA’s potential for particle physics was clear from the beginning: specifically to drive advanced plasma-wakefield accelerators, in which charged particles are brought to high energies over very short distances by surfing plasma waves.

“After we invented laser-wakefield acceleration back in 1979, I was acutely aware that the laser community at that time did not have the specification we needed to drive wakefields, which needed ultrafast and ultra-intense pulses”, explains Toshi Tajima of the University of California at Irvine. Tajima became aware of CPA in 1989 and, a few years later, began a long-term collaboration with Mourou, developing ultra-intense lasers and their applications in accelerators, including those used for medical purposes, as well as other applications, such as transmutation and intense X-rays.

Today, acceleration gradients two to three orders of magnitude higher than those achieved using existing radiofrequency (RF) techniques are possible at state-of-the-art laser-driven plasma-wakefield experiments, promising more compact and potentially cheaper particle accelerators. Though not yet able to match the quality and reliability of conventional acceleration techniques, plasma accelerators might one day be able to overcome the limitations of today’s RF technology, thinks Constantin Haefner, programme director for advanced photon technologies at Lawrence Livermore National Laboratory. “The race has started”, he says.

Electrons can also be used to drive plasma accelerators, as can protons. Just a few months ago, the AWAKE experiment at CERN demonstrated the first proton-driven plasma-wakefield acceleration in a long plasma cell. Although AWAKE does not use a laser to drive the plasma, it employs a high-power laser to generate the plasma from a gas, while at the same time seeding the acceleration process.

Beyond accelerators, the enormous intensity of single-shot pulses enabled by CPA makes new types of experiments in high-energy physics possible. That is the focus of the Extreme Light Infrastructure (ELI), which is nearing completion in the Czech Republic, Hungary and Romania. Initiated by Mourou in 2005, ELI will explore the use of high-power petawatt lasers such as the Livermore Laboratory’s High-Repetition-Rate Advanced Petawatt Laser System (HAPLS).

Going further, the International Center for Zetta-Exawatt Science and Technology (IZEST), established in France in 2011, will extend existing laser facilities to the exa- and zettawatt scale. Under Mourou and Tajima’s direction, IZEST is carrying out studies including searches for dark matter and energy and probes of the nonlinearity of the vacuum via zeptosecond dynamical spectroscopy, and aims to build a community around the new field of laser-based particle physics.