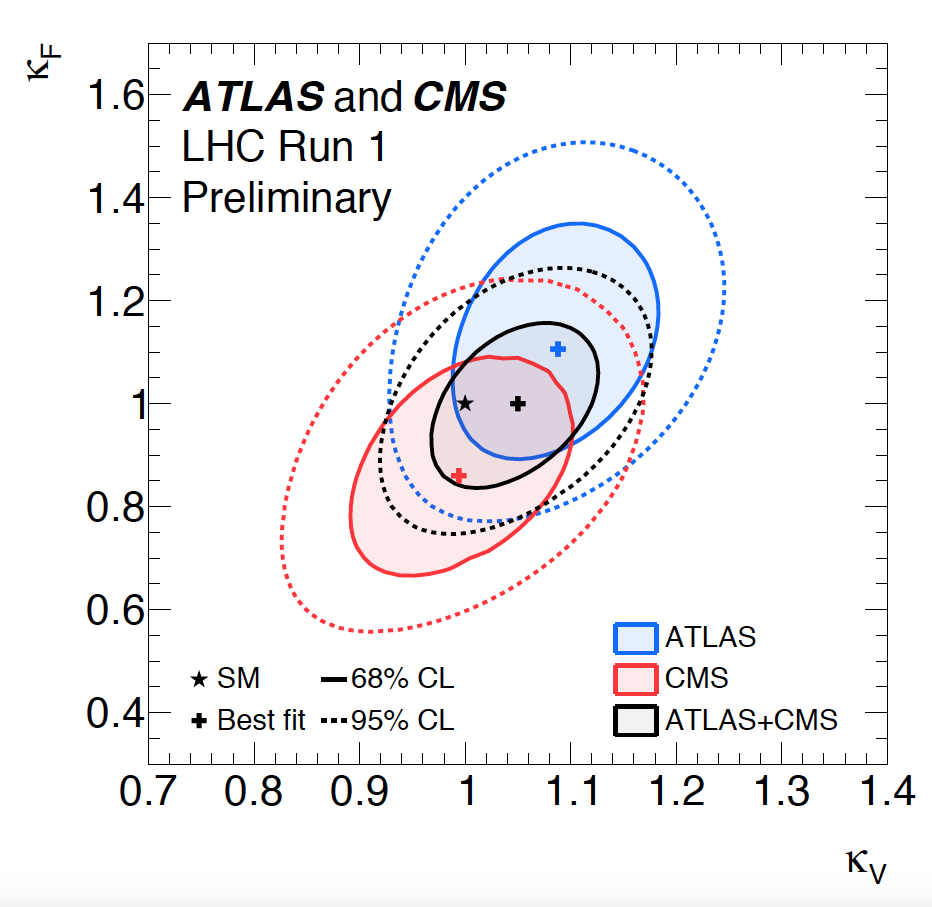 Results of the analyses by individual experiments (coloured) and both experiments together (black), showing the improvement in precision resulting from the combination of results.

Geneva/Saint Petersburg, 1st September 2015. Three years after the announcement of the discovery of a new particle, the so-called Higgs boson, the ATLAS and CMS Collaborations present for the first time combined measurements of many of its properties, at the third annual Large Hadron Collider Physics Conference (LHCP 2015). By combining their analyses of the data collected in 2011 and 2012, ATLAS and CMS draw the sharpest picture yet of this novel boson. The new results provide in particular the best precision on its production and decay and on how it interacts with other particles. All of the measured properties are in agreement with the predictions of the Standard Model and will become the reference for new analyses in the coming months, enabling the search for new physics phenomena. This follows the best measurement of the mass of the Higgs boson, published in May 2015 after a combined analysis by the two collaborations.

“The Higgs boson is a fantastic new tool to test the Standard Model of particle physics and study the Brout-Englert-Higgs mechanism that gives mass to elementary particles,” said CERN1 Director General Rolf Heuer. “There is much benefit in combining the results of large experiments to reach the high precision needed for the next breakthrough in our field. By doing so, we achieve what for a single experiment would have meant running for at least 2 more years.”

There are different ways to produce a Higgs boson, and different ways for a Higgs boson to decay to other particles. For example, according to the Standard Model, the theory that describes best forces and particles, when a Higgs boson is produced, it should decay immediately in about 58% of cases into a bottom quark and a bottom antiquark. By combining their results, ATLAS and CMS determined with the best precision to date the rates of the most common decays.

Such precision measurements of decay rates are crucially important as they are directly linked to the strength of the interaction of the Higgs particle with other elementary particles, as well as to their masses. Therefore, the study of its decays is essential in determining the nature of the discovered boson. Any deviation in the measured rates compared to those predicted by the Standard Model would bring into question the Brout-Englert-Higgs mechanism and possibly open the door to new physics beyond the Standard Model.

“ This is a big step forward, both for the mechanics of the combinations and in our measurement precision, ” said ATLAS Spokesperson Dave Charlton. “As an example, from the combined results the decay of the Higgs boson to tau particles is now observed with more than 5 sigma significance, which was not possible from CMS or ATLAS alone.”

“Combining results from two large experiments was a real challenge as such analysis involves over 4200 parameters that represent systematic uncertainties,” said CMS Spokesperson Tiziano Camporesi. “With such a result and the flow of new data at the new energy level at the LHC, we are in a good position to look at the Higgs boson from every possible angle”.

1. CERN, the European Organization for Nuclear Research, is the world's leading laboratory for particle physics. It has its headquarters in Geneva. At present, its member states are Austria, Belgium, Bulgaria, the Czech Republic, Denmark, Finland, France, Germany, Greece, Hungary, Israel, Italy, the Netherlands, Norway, Poland, Portugal, Slovakia, Spain, Sweden, Switzerland and the United Kingdom. Romania is a Candidate for Accession. Serbia is an Associate Member in the pre-stage to Membership. Pakistan and Turkey are Associate Members. India, Japan, the Russian Federation, the United States of America, the European Union, JINR and UNESCO have observer status.