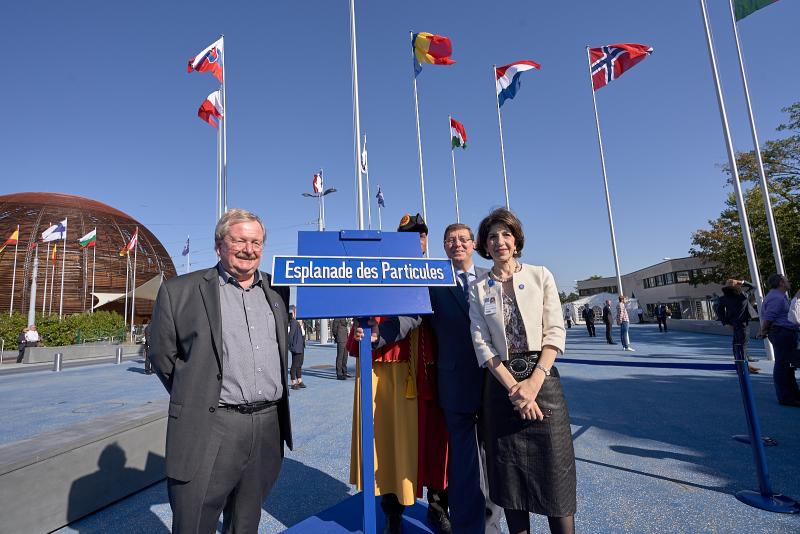 Geneva, 28 September 2018. CERN, the État de Genève and the Commune de Meyrin today inaugurated the brand-new Esplanade des Particules, an open space firmly focused on welcoming visitors and the general public. This large public space was designed with pedestrians and sustainable transport in mind. It enhances the integration of CERN into the local urban landscape and improves access to the Laboratory. During today’s ceremony, the flags of CERN’s 22 Member States were raised on the new esplanade for the first time, and will serve as a signpost for this hub of scientific endeavour and international cooperation. From today onwards, CERN’s official address will be 1 Esplanade des Particules.

“The Esplanade des Particules, which we are inaugurating today, is the crowning achievement of the very fruitful collaboration between CERN, the État de Genève and the Commune de Meyrin, and symbolises CERN’s desire to become ever more open to the world,” said Fabiola Gianotti, CERN Director-General.  “It will also form a magnificent setting for the construction of the Science Gateway, a new centre for communicating science to the general public and for encounters between CERN’s scientists and visitors.”

The idea for the Esplanade des Particules, at the gateway into Geneva and Switzerland, came jointly from the République et Canton de Genève, CERN and the Commune de Meyrin, who launched an international competition in 2011 for a redesign of the Route de Meyrin. The landscape architects Studio Paolo Bürgi of Ticino won the competition with their design, which connects CERN’s Reception building to the Globe of Science and Innovation.

Stephan Bürgi explains the concept: “This esplanade puts everything on the same level, like a slab resting on the ground, with the aim of marking out a completely new space. A simple surface, enriched by a brass inserts, evokes the vectorial shape of a magnetic field.”

40% of the project was financed by the Swiss Confederation in the framework of the Grand Genève urban development project and the remaining 60% was split between the Canton de Genève, CERN and the Commune de Meyrin. In the words of Mauro Poggia, state councillor in charge of Geneva’s Department of Employment and Health: “This new space constitutes the interface between CERN and the city. Building on the success of the Globe of Science and Innovation, it will further improve access for the general public to this institution and its passionate scientists. This commitment to openness, supported by CERN’s Member States, represents a great opportunity for the people of this region, as well as for the 200 000 visitors that come to CERN every year, making this site a major tourist attraction.”

Visitors from all over the world come to CERN to attend lectures and events and discover CERN’s permanent exhibitions. In order to facilitate access for this ever-growing number of visitors, the Esplanade des Particules has been designed as a public space aimed at sharing CERN’s creative and dynamic atmosphere with local and international visitors alike.

“We are happy that the Esplanade des Particules has come to fruition. CERN is a great calling card for our commune and deserves to be shown off,” said Pierre-Alain Tschudi, the Mayor of Meyrin.

Following the inauguration ceremony for the Esplanade des Particules, the world’s largest particle physics laboratory opened its doors to the general public for Researchers’ Night. Budding scientists, enthusiasts and the uninitiated of all ages participated in this veritable festival of science, which featured a variety of free events.