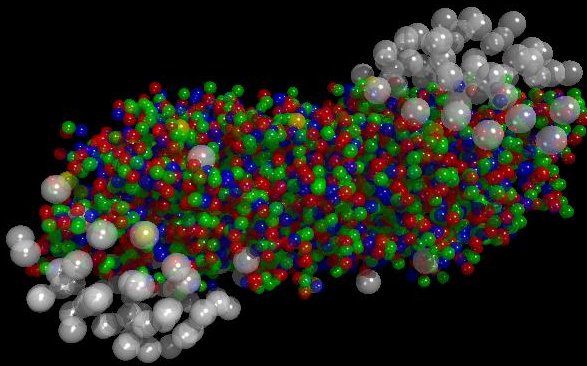 Geneva, 10 February 2000. At a special seminar on 10 February, spokespersons from the experiments on CERN1's Heavy Ion programme presented compelling evidence for the existence of a new state of matter in which quarks, instead of being bound up into more complex particles such as protons and neutrons, are liberated to roam freely.

Geneva, 10 February 2000. At a special seminar on 10 February, spokespersons from the experiments on CERN1's Heavy Ion programme presented compelling evidence for the existence of a new state of matter in which quarks, instead of being bound up into more complex particles such as protons and neutrons, are liberated to roam freely.

Professor Luciano Maiani, CERN Director General, said "The combined data coming from the seven experiments on CERN's Heavy Ion programme have given a clear picture of a new state of matter. This result verifies an important prediction of the present theory of fundamental forces between quarks. It is also an important step forward in the understanding of the early evolution of the universe. We now have evidence of a new state of matter where quarks and gluons are not confined. There is still an entirely new territory to be explored concerning the physical properties of quark-gluon matter. The challenge now passes to the Relativistic Heavy Ion Collider at the Brookhaven National Laboratory and later to CERN's Large Hadron Collider."

The aim of CERN's Heavy Ion programme was to collide lead ions so as to create immensely high energy densities which would break down the forces which confined quarks inside more complex particles. A very high energy beam of lead ions (33 TeV) was accelerated in CERN's Super Proton Synchrotron (SPS) and crashed into targets inside the seven different experimental detectors. The collisions created temperatures over 100 000 times as hot as the centre of the sun, and energy densities twenty times that of ordinary nuclear matter, densities which have never before been reached in laboratory experiments. The collected data from the experiments gives compelling evidence that a new state of matter has been created. This state of matter found in heavy ion collisions at the SPS features many of the characteristics of the theoretically predicted quark-gluon plasma, the primordial soup in which quarks and gluons existed before they clumped together as the universe cooled down.

The lead beam programme started in 1994, after the CERN accelerators has been upgraded by a collaboration between CERN and institutes in the Czech Republic, France, India, Italy, Germany, Sweden and Switzerland. A new lead ion source was linked to pre-existing, interconnected accelerators, at CERN, the Proton Synchrotron (PS) and the SPS. The seven large experiments involved measured different aspects of lead-lead and lead-gold collisions. They were named NA44, NA45, NA49, NA50, NA52, WA97 / NA57 and WA98. Some of these experiments use multipurpose detectors to measure and correlate several of the more abundant observable phenomena. Others are dedicated experiments to detect rare signatures with high statistics. This co-ordinated effort using several complementing experiments has proven very successful.

The project is an excellent example of collaboration in physics research. Scientists from institutes in over twenty countries** have participated in the experiments. The programme has also allowed a productive partnership to develop between high energy physicists and nuclear physicists. More importantly, this step forward has been made possible by the collaboration between the individual experiments. The picture of quark-gluon plasma resembles a jigsaw puzzle, with many pieces provided by the different experiments. The data from any one experiment is not enough to give the full picture but the combined results from all experiments agree and fit. Whereas all attempts to explain them using established particle interactions have failed, many of the observations are consistent with the predicted signatures of a quark-gluon plasma.

The results from CERN present strong incentive for the future planned experiments. While all of the pieces of the puzzle seem to fit with a quark-gluon plasma explanation, it is essential to study this newly produced matter at higher and lower temperature in order to fully characterize its properties and definitively confirm the quark gluon plasma interpretation. The focus of heavy ion research now moves to the Relativistic Heavy Ion Collider (RHIC) at the Brookhaven National Laboratory in the United States, which will start experiments this year. In 2005 CERN's Large Hadron Collider (LHC) experimental programme will include a dedicated heavy ion experiment, ALICE.