A new projection system breathes life into the Synchrocyclotron, an accelerator that has been dormant since 1990 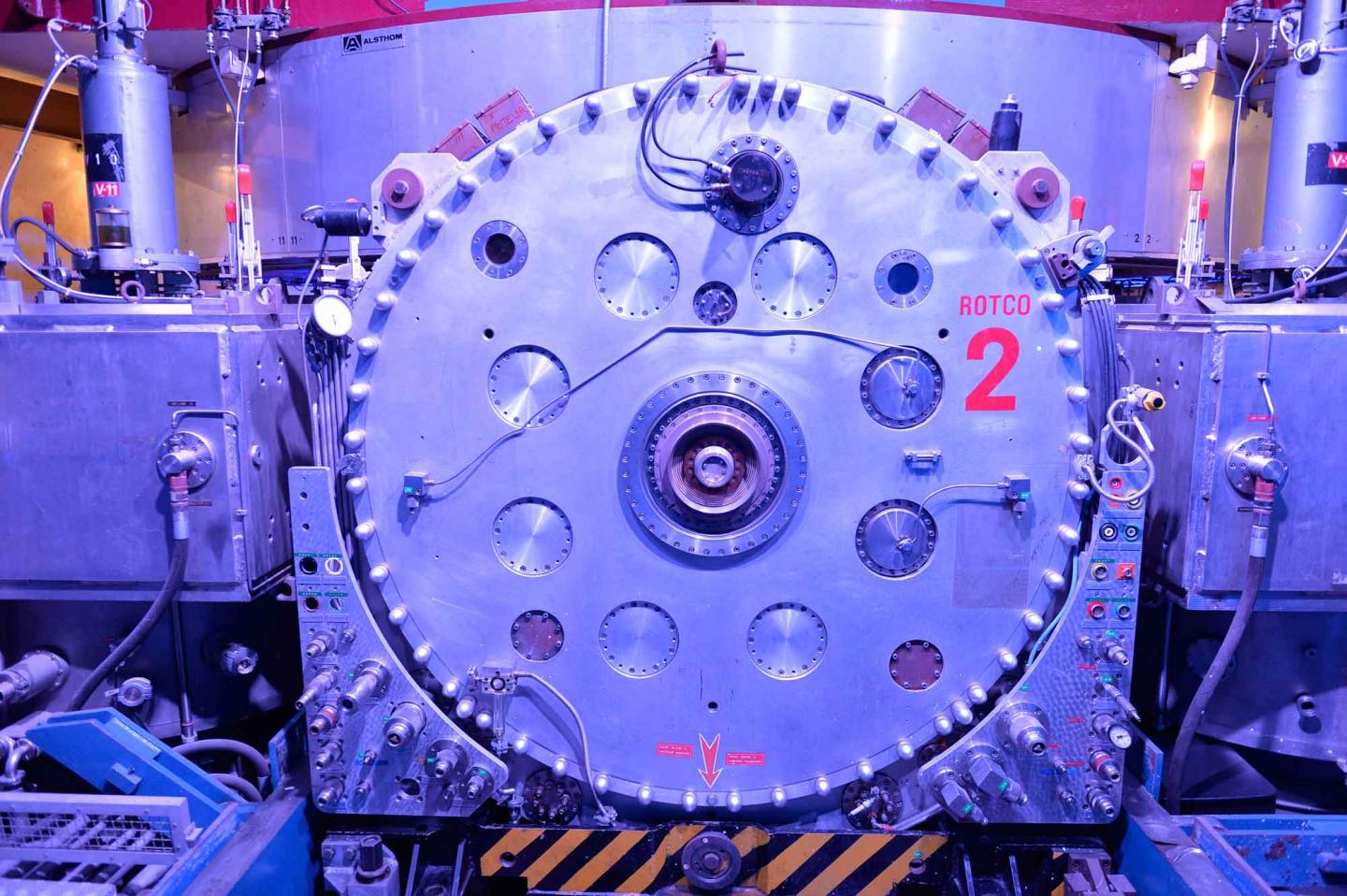 There is a blue glow coming from Hall 300 on CERN's Meyrin site. Inside, a 3D projection system is giving the laboratory's first accelerator, the Synchrocyclotron (SC), a new lease of life.

When it was built in 1957, the SC was the highest energy particle accelerator in Europe, and in its 33 years of service it characterized many important physics results, such as the disintegration of the pion. The SC was shut down in 1990 and has lain dormant since.

Now the CERN Education and Radiation Protection groups are jointly overseeing an extensive refurbishment project to turn the SC into a new exhibition point for visitors.

"You enter the hall through the time tunnel," explains Bernard Pellequer who, together with Rolf Landua and Marco Silari is heading the project. "On the walls, timelines go back to the foundation of CERN and beyond, showing important moments in CERN history."

Today participants in the 10th edition of the Geneva Mapping Festival have gathered to preview the new exhibition. “The idea to organize an event at CERN within the Festival came up when I met the Festival organisers at the CinéGlobe short film festival in March” says Silari.

In the hall the real show begins. An intricate system projects beautifully crafted animations onto the accelerator's surfaces. Whizzing protons flit across the room; magnetic fields expand in clouds of blue haze as a narrator explains a typical Synchrocyclotron run, beginning with prepping the vacuum chamber and getting the electromagnetic field just right, and ending with high-energy protons smashing into a target. Each part of the process is punctuated with 3D display giving a clear picture of how the accelerator worked. It's beautiful.

CERN awarded a contract to Telesonic, a firm based in Basque Country, which together with Eikonos, based in Barcelona, prepared the mapping on the SC. "The technical challenges were considerable," says Mikel Eguren of Telesonic, charged with developing and installing the projection system. Eight projectors simultaneously display six different images onto the accelerator to get the 3D effect. "The projection distance is short, as are the distances between the accelerator's different surfaces. So focusing correctly on the different parts was difficult," says Eguren.

The projection ends and the lights come up, revealing tools and artefacts around the room. On one wall, huge spanners used to tighten the bolts of the accelerator's iconic red magnet. On a nearby desk, an oscilloscope and a mechanical calculator, both used to gather data on particle tracks within the accelerator.

"We've chosen to display objects that were used at the time," says Pellequer, "to show the technical and scientific context at CERN in the 1950s and 60s – a time before computers and digital cameras."

Director-General Rolf Heuer will inaugurate the new visit point at a ceremony for the CERN Council on 19 June. Representatives of the European Physical Society will take part, as the Synchrocyclotron will be named an EPS Historic Site. It will be open to the general public soon afterwards.