Accelerating particles - but not just for the LHC 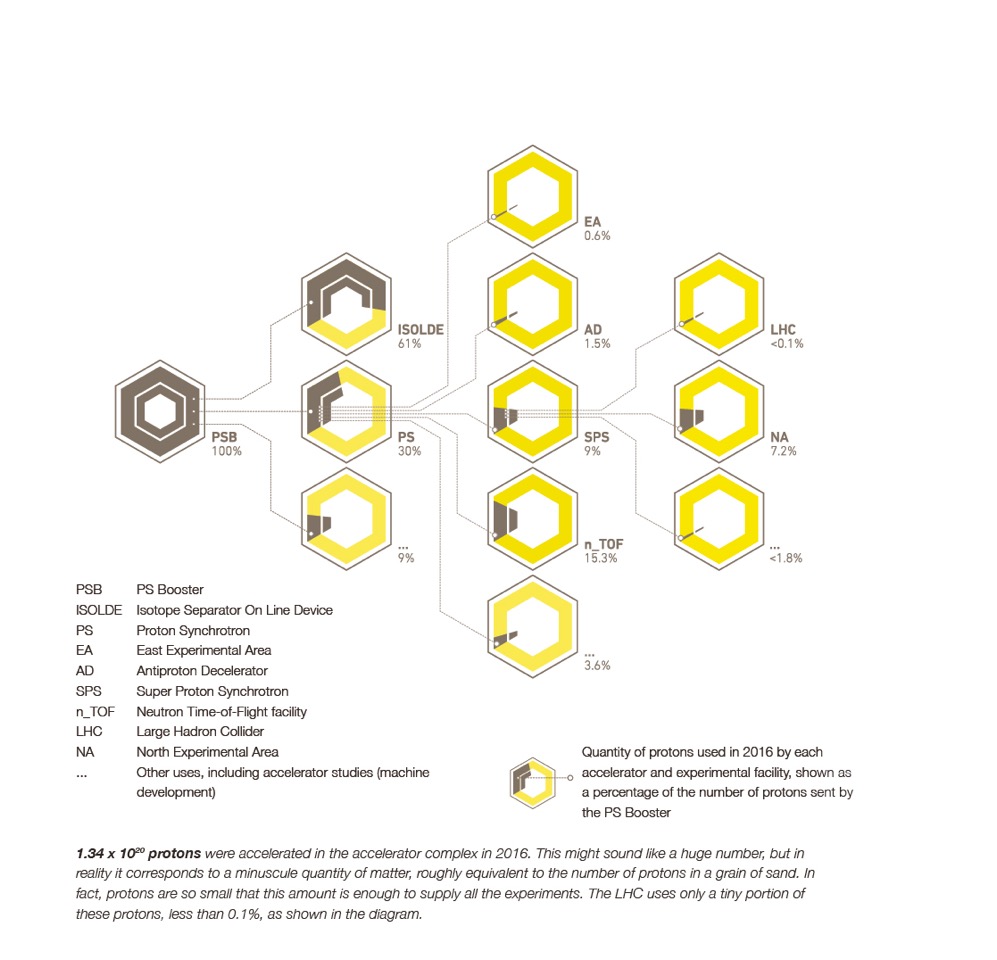 Distribution of protons delivered by the accelerator chain to the different installations. (Image: Daniel Dominguez/CERN)

This week, the Large Hadron Collider (LHC) was in technical stop, but particles continued to circulate in the other accelerators. This is because the chain of four injectors that feed the LHC also supplies particles to myriad experiments across several experimental areas.

In fact, even when the LHC is running, the other experimental areas consume almost all the particles, as the diagram shows. The large collider uses less than 0.1% of the protons prepared by the injector chain. That’s primarily because the LHC is a storage ring: the same beams circulate in the ring for hours at a time, producing collisions with every circuit they complete. That’s not the case for CERN’s other machines, which send beams to fixed targets – an operation that has to be repeated every time data is taken.

All the protons start their journey in the linear accelerator Linac2, before being launched at a third of the speed of light into the Proton Synchrotron Booster (PSB). At that point, their paths diverge.

More than half of the protons are sent to ISOLDE, a nuclear physics research facility. ISOLDE supplies various experimental areas hosting numerous experiments each year in fields ranging from fundamental physics to materials sciences and the production of isotopes for medical applications. Last year, ISOLDE supplied particles to 46 experiments.

The remainder of the particles leaving the PS Booster go to the Proton Synchrotron (PS), which supplies three other experimental areas: the Antiproton Decelerator (AD), used for antimatter experiments, the East Area, which notably is home to the CLOUD experiment dedicated to studying the formation of clouds, and finally n_TOF, another nuclear physics facility.

The PS sends a small portion of its protons to the Super Proton Synchrotron (SPS), which in turn sends most of them to the North Area, where several fixed-target experiments including COMPASS and NA62 take data. Thus, in the end, the LHC receives only a tiny proportion of the particles that started the journey.

In 2016, CERN’s accelerator complex accelerated 134 billion billion protons (1.34 x 1020). This number corresponds to a minuscule quantity of matter, roughly equivalent to the number of protons in a grain of sand, but protons are so small that this amount is enough to supply all the experiments.

The LHC will resume operation tonight. After a week-end of tuning, the LHC physics programme should restart on Monday.