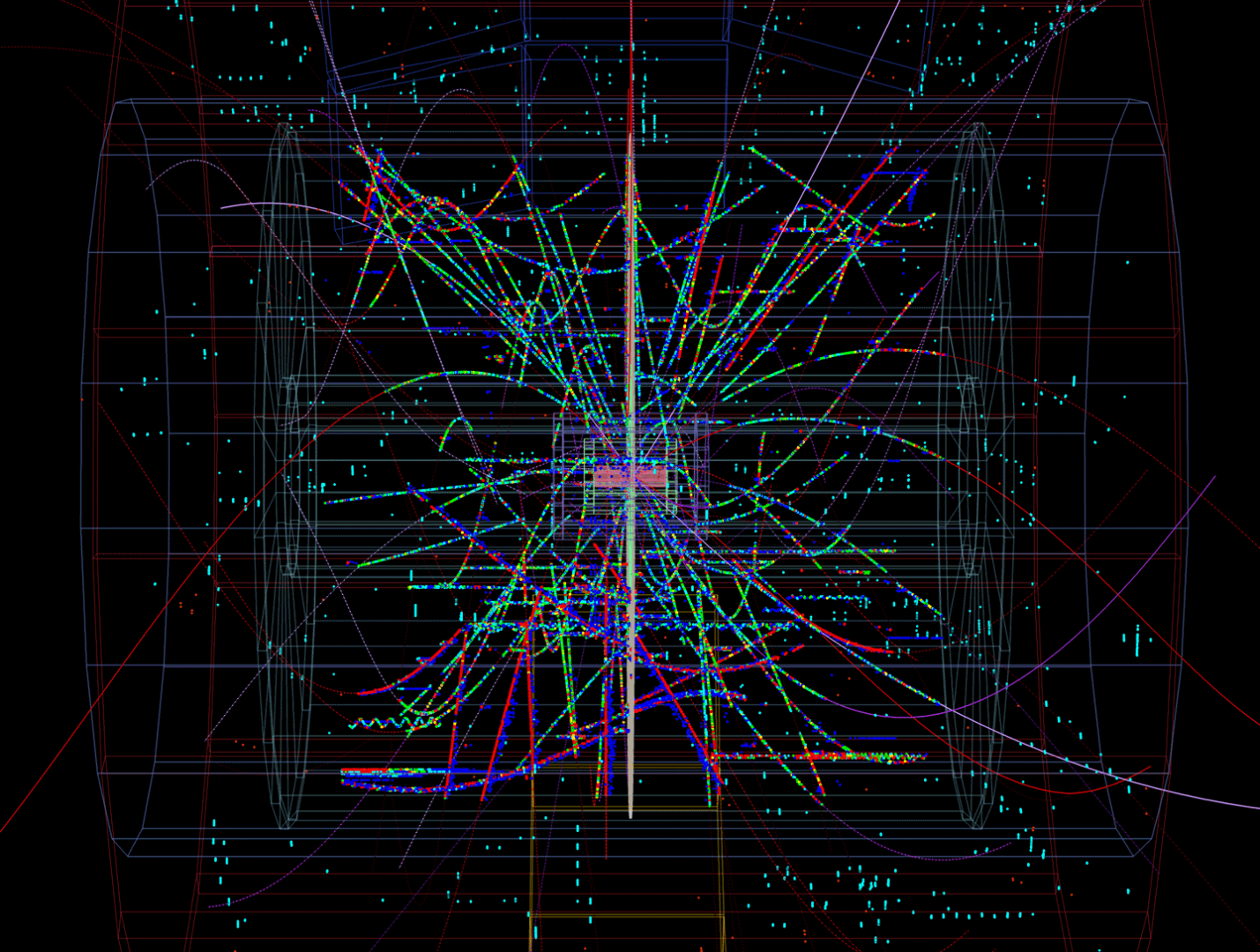 Protons collide with lead nuclei in the ALICE detector this image from a <a href="/about/updates/2012/09/lhc-collides-protons-lead-ions-first-time">test run in September 2012</a> (Image: CERN)

On Sunday afternoon the control team for the Large Hadron Collider (LHC) brought protons into collision with lead ions for the LHC's first physics beams of 2013. The collisions were the first in a lead-proton run that is set to continue until February, when the LHC begins its two-year shutdown.

The LHC experiments ALICE, ATLAS, CMS and LHCb are all still taking data. ALICE is specialized in scrutinizing heavy-ion collisions to investigate the properties of the elusive quark-gluon plasma, the primordial state of matter that existed in the first moments after the big bang, just before the phase transition to matter made of nucleons (protons and neutrons).

The LHC usually collides protons or lead ions. To study quark-gluon plasma, physicists need to create the high-temperature matter that is formed in the collisions of heavy ions. In lead-lead collisions ALICE physicists can deduce some properties of the plasma - from its effect on particles moving through it, for instance. But they also need to distinguish effects caused by the hot plasma from effects caused by the cold nuclear matter that makes up lead nuclei.

In the current run, the LHC is colliding protons with lead ions, which are made of 208 nucleons. Comparing the results of lead-proton collisions to those of lead-lead collisions will help ALICE physicists to decouple the effects of the plasma from effects that stem from having lead ions in the initial state.

"The lead-proton run will help us to understand the complexity of the lead-lead interaction at many levels," says ALICE physicist Despina Hatzifotiadou. "There is somehow a missing link in the game: We know that the configurations of the quarks and gluons that make up the protons and neutrons of the incoming lead nucleus can be somewhat different from the configurations of the quarks and gluons of the incoming protons. We want to measure if part of the effects we find when comparing lead-lead and proton-proton collisions is due to this configuration difference rather than the formation of the plasma. Proton-lead collisions, where we do not expect formation of quark-gluon plasma but we do have an incoming lead nucleus, are an ideal tool for this study."

Hatzifotiadou says the data from the lead-proton collisions will represent an ultimate benchmark to fully understand results from lead-lead collisions. "It will allow physicists to decouple the cold nuclear matter effects and thus will shed light on our study of the quark-gluon plasma," she says.