Heavy metal: Refilling the lead source for the LHC 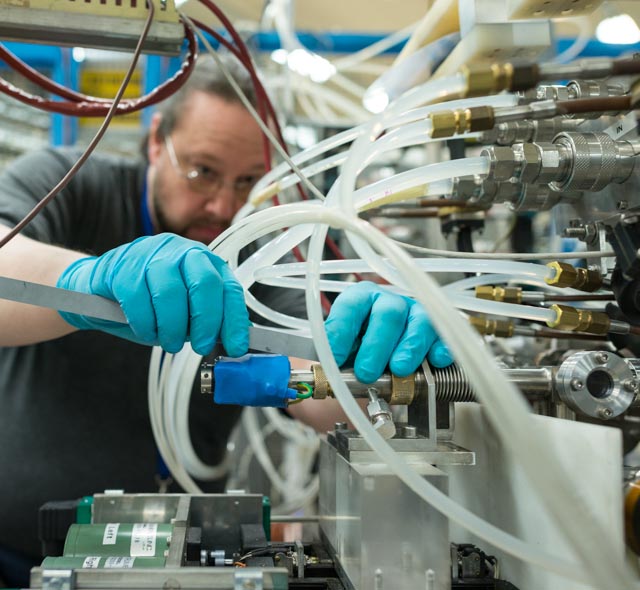 Ion-source physicist Detlef Küchler measures the position of the oven inside the ion source (Image: CERN)

Ion-source physicist Detlef Küchler knows his heavy metal – his lead-208 (208Pb) to be precise. His job is to prepare and start the acceleration of all primary particles used in accelerators at CERN.

The proton source for all CERN accelerators, including the Large Hadron Collider (LHC), is a bottle of hydrogen gas connected to a machine called a duoplasmatron that feeds Linac 2. The duoplasmatron strips hydrogen gas of its electrons, producing a plasma of protons, electrons and molecular ions. The plasma expands towards the extraction electrodes and a proton beam is formed ready for acceleration.

Making a beam of lead ions requires a rather different approach. "For the heavy ions, we have an electron-cyclotron-resonance ion source – it's a plasma source connected to Linac 3," says Küchler."We create lead ions from isotopically pure solid lead."

The process starts with a small sample of solid lead-208. To turn the metal into a beam of lead ions, it must first be heated to become a vapour. The lead vapour is ionized to become a plasma, then the ions are extracted from the plasma and accelerated. During the process only a part of the lead is consumed for the beam. "About 1.3 grams is eaten up in two weeks," says Küchler. At stable beams of a given intensity the accelerator chain consumes about 2 milligrams of lead per hour, he says.

At 12,000 Swiss francs (€9700) for 10 grams of isotopically pure lead, it's lucky that only part of the lead is consumed for the beam production. Küchler picks through material that has collected on the oven from the previous run, looking for any usable lead droplets. "Even a small drop of pure lead can be worth hundreds of dollars," he says. "So I try to recycle what I can."

Küchler says it would be possible in principle to use normal lead – it has 4 stable isotopes – but only if there is a spectrometer behind the source to separate the different charged states. Half of the beam would be lost at this position due to the different isotopes.

The LHC has been colliding protons with lead ions for the last ten days – it's time to replace the lead sample. Working with gloves to guard against lead toxicity, Küchler places a small sliver of lead-208 inside a ceramic crucible, which itself sits in an "oven" casing at the end of a metal rod. Küchler places the rod inside the source – surrounded by a tangle of cooling tubes, heating cables, wires and gauges – adjusting the position of the lead sample using a set of motors.

Once the machine is switched on, the lead will be heated to around 800°C, and the LHC can fire up again.