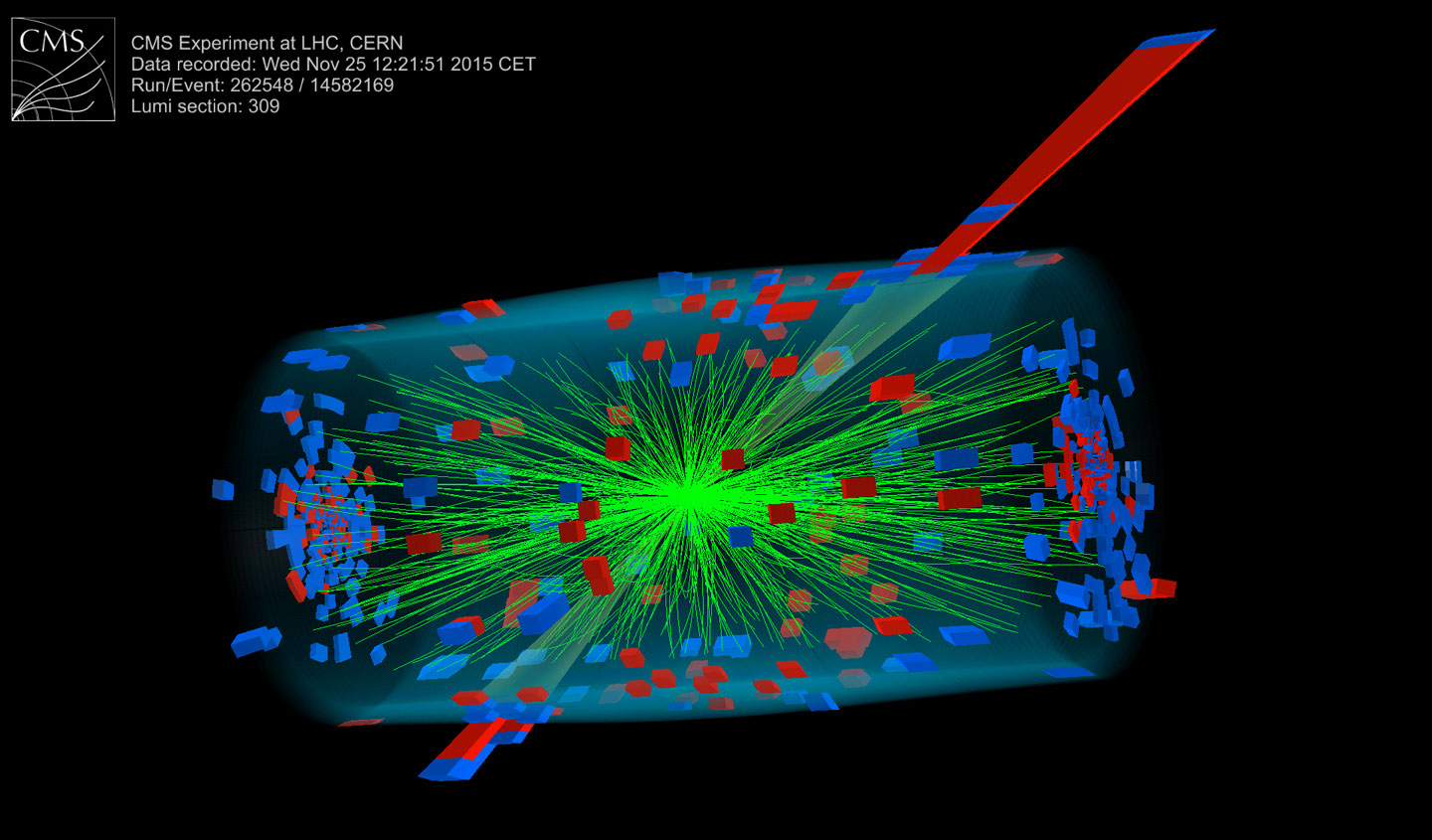 After the successful restart of the Large Hadron Collider (LHC) and its first months of data taking with proton collisions at a new energy frontier, the LHC is moving to a new phase, with the first lead-ion collisions of season 2 at an energy about twice as high as that of any previous collider experiment. Following a period of intense activity to re-configure the LHC and its chain of accelerators for heavy-ion beams, CERN’s accelerator specialists put the beams into collision for the first time in the early morning of 17 November 2015 and ‘stable beams’ were declared at 10.59am today, marking the start of a one-month run with positively charged lead ions: lead atoms stripped of electrons. The four large LHC experiments will all take data over this campaign, including LHCb, which will record this kind of collision for the first time. Colliding lead ions allows the LHC experiments to study a state of matter that existed shortly after the big bang, reaching a temperature of several trillion degrees.

“It is a tradition to collide ions over one month every year as part of our diverse research programme at the LHC,” said CERN Director-General Rolf Heuer. “This year however is special as we reach a new energy and will explore matter at an even earlier stage of our universe.”

Early in the life of our universe, for a few millionths of a second, matter was a very hot and very dense medium – a kind of primordial ‘soup’ of particles, mainly composed of fundamental particles known as quarks and gluons. In today’s cold Universe, the gluons “glue” quarks together into the protons and neutrons that form bulk matter, including us, as well as other kinds of particles.

“There are many very dense and very hot questions to be addressed with the ion run for which our experiment was specifically designed and further improved during the shutdown,” said ALICE collaboration spokesperson Paolo Giubellino. “For instance, we are eager to learn how the increase in energy will affect charmonium production, and to probe heavy flavour and jet quenching with higher statistics. The whole collaboration is enthusiastically preparing for a new journey of discovery.”

Increasing the energy of collisions will increase the volume and the temperature of the quark and gluon plasma, allowing for significant advances in understanding the strongly-interacting medium formed in lead-ion collisions at the LHC. As an example, in season 1 the LHC experiments confirmed the perfect liquid nature of the quark-gluon plasma and the existence of “jet quenching” in ion collisions, a phenomenon in which generated particles lose energy through the quark-gluon plasma. The high abundance of such phenomena will provide the experiments with tools to characterize the behaviour of this quark-gluon plasma. Measurements to higher jet energies will thus allow new and more detailed characterization of this very interesting state of matter.

“The heavy-ion run will provide a great complement to the proton-proton data we've taken this year," said ATLAS collaboration spokesperson Dave Charlton. "We are looking forward to extending ATLAS' studies of how energetic objects such as jets and W and Z bosons behave in the quark gluon plasma.”

The LHC detectors were substantially improved during the LHC’s first long shutdown. With higher statistics expected, physicists will be able to look deeper at the tantalising signals observed in season 1.

"Heavy flavour particles will be produced at high rate in Season 2, opening up unprecedented opportunities to study hadronic matter in extreme conditions,” said CMS collaboration spokesperson Tiziano Camporesi. « CMS is ideally suited to trigger on these rare probes and to measure them with high precision. »

For the very first time, the LHCb collaboration will join the club of experiments taking data with ion-ion collisions.

"This is an exciting step into the unknown for LHCb, which has very precise particle identification capabilities. Our detector will enable us to perform measurements that are highly complementary to those of our friends elsewhere around the ring,” said LHCb collaboration spokesperson Guy Wilkinson.