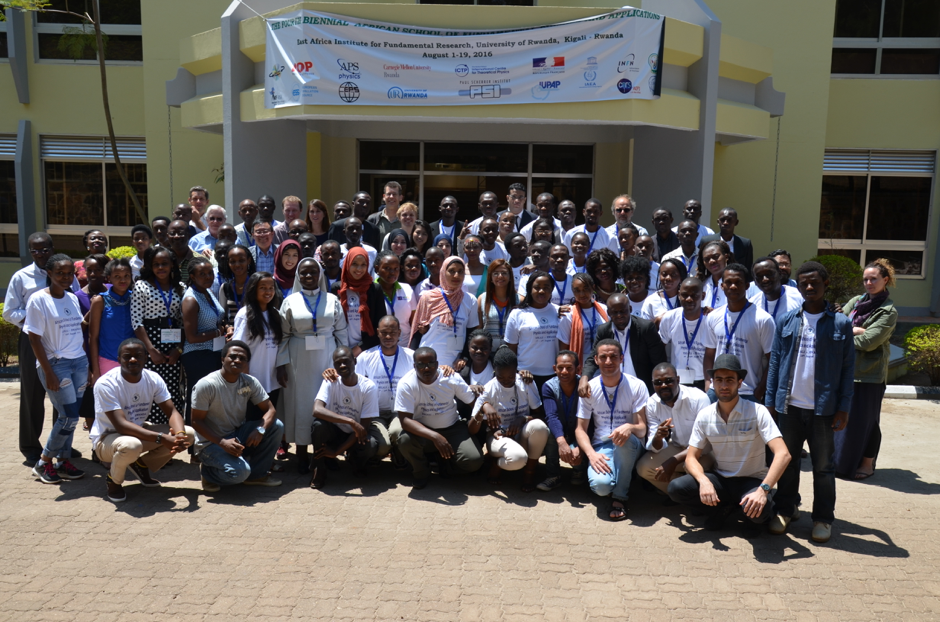 The students of the fourth African School of Fundamental Physics and Applications pose for the traditional conference group picture. Many lecturers flew in from CERN to give lectures and mentor students. (Image: Gilbert Tekoute)

Seventy-five students from around the African continent, chosen from 439 applicants, were hosted in the University of Rwanda’s College of Sciences and Technology for about 3 weeks.

The school received financial support from CERN and 19 other institutions in total, including the International Centre for Theoretical Physics (ICTP), Brookhaven National Laboratory, the South African National Research Foundation and Department of Technology, the Rwandan Ministry of Education, INFN, and other major particle physics laboratories, as well as governmental institutions in Africa, Europe and the United States.

Forty lecturers from various different fields in physics flew in from CERN and many other parts of the world to give lectures and mentor students. “What makes this programme unique is that we tailor each programme to whichever area of physics is interesting to the host country,” says Ketevi Assamagan, a physicist at Brookhaven National Laboratory in New York and a member of the international organising committee of the school. “The ultimate goal is to host the school in as many countries on the continent as possible, with the help of the host country governments.”

The biennial summer school, originally launched in South Africa in 2010, has also been hosted by Ghana in 2012 and by Senegal in 2014. The programme has grown in leaps and bounds, with each school seeing an increase in the number of applications from interested students. “The summer school was born out of a need to see African scholars represented in some of the world’s major research labs,” explains Assamagan. “Imparting STEM skills is key to making sure that our young people graduating from universities and research institutions will be going on to create jobs instead of relying on governments or private-sector salaried employment.”

In 2018 the African School of Fundamental Physics and Applications will be hosted in Namibia and promises to have an even bigger number of applications and interest from learners across Africa.

The African School of Fundamental Physics and Applications is a non-profit organisation that is passionate about increasing capacity development in fundamental physics and related applications in Africa. It was founded in 2010 with the aim of fostering collaboration through education. For more information visit the ASP website: www.africanschoolofphysics.org