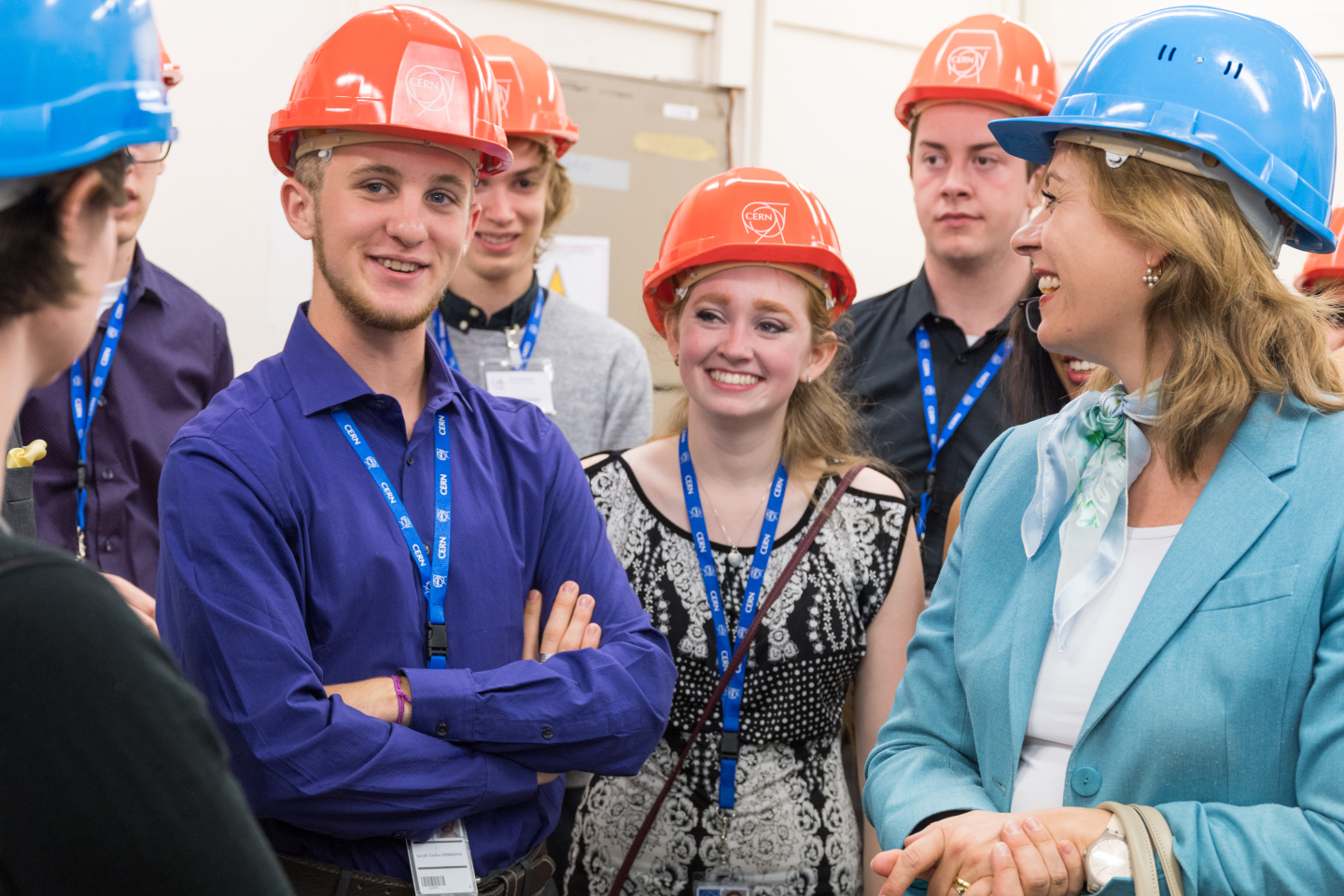 The participants in this year’s Beamline for Schools competition sharing their experiences with members of the CERN Management. (On the right: Charlotte Warakaulle, CERN Director for International Relations) (Image: Sophia Bennett/CERN)

Can high-school students conduct physics experiments just like real scientists? Two teams of students from Italy and Canada proved that they can.

After winning the 2017 Beamline for Schools (BL4S) competition, “TCO-ASA” from Fermo, Italy, and “Charging Cavaliers” from Cambridge, Canada, came to CERN for two weeks to conduct their own experiments at a fully-equipped CERN beamline. The teams were selected out of 180 applications.

“Coming up with the ideas and writing a scientific proposal is a lot of work, but also an experience we can profit from when we finish school and start looking for a job,” says Davide Cartuccia from the Italian team.

The Italian team, consisting of eight students, designed and constructed a simple and low-cost Cherenkov light detector. Cherenkov light is a phenomenon observed when particles pass through a medium with a speed higher than the speed of light in that medium. The students assembled a light-tight plastic box filled with water. A sensitive camera and a silicon photomultiplier placed outside the box were used to detect the flashes of Cherenkov light inside.

The thirteen Canadian students bravely immersed themselves in the unexplored territories of particle physics, looking for hypothetical exotic particles carrying a fractional charge. It is believed that fractionally charged particles can be created by the collision of ordinary particles with a target. For this reason, the team directed the proton beam from the Proton Synchrotron at a block of iron. The fully charged particles were deflected with a magnet and a specially developed scintillator was used to pick up the faint signals that the fractionally charged particles might leave. In addition, the team found efficient ways to reduce the background noise. The data the students collected will be analysed in detail once they are back in Canada.

“We feel incredibly privileged to be given this opportunity. It is a once-in-a-lifetime opportunity that opens so many doors to knowledge that is otherwise inaccessible to us,” says Denisa Logojan from the Canadian team.

Besides working on their physics projects, the students had a full day of safety training and visited various CERN facilities. In four shifts per day the students worked in the control room and the T9 beam line in the East Hall, while at the same time several volunteers helped them with data acquisition. For more than 10 days they lived the life of a scientist. “Everyone is so knowledgeable, friendly and open. We talked to scientists and they were all welcoming,” said Marina Robin from the Canadian team.

Returning to their schools does not bring their experience to an end. Data analysis will continue with the help of the support scientists and teachers, and they are encouraged to write a scientific paper, which can eventually be published in a scientific journal or presented at a conference, as two former winning teams have done already.

Beamline for Schools is an education and outreach project funded by the CERN & Society Foundation, supported by individuals, foundations and companies. The project is funded in part by the Arconic Foundation and additional contributions are received from the Motorola Solutions Foundation and National Instruments.

The 2018 BL4S competition has already been announced and more than 60 teams have already been pre-registered. Proposals will be accepted until 31 March 2018. We are looking forward to another exciting run of Beamline for Schools in the year to come!