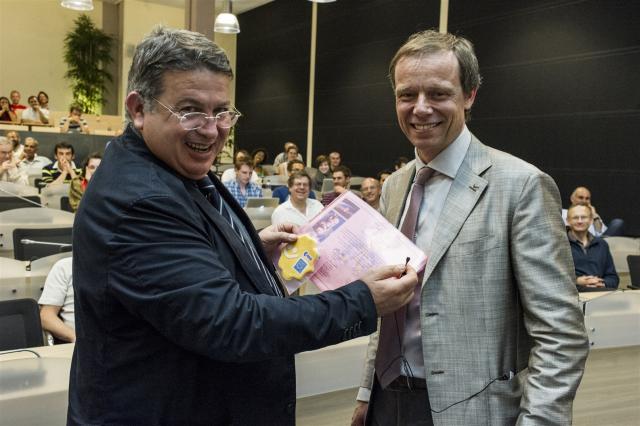 European Space Agency (ESA) astronaut and former CERN scientist Christer Fuglesang visited CERN on 24 and 25 May. In addition to presenting the research programme of the International Space Station, he brought with him an unusual gift - a fluffy yellow soft toy representing the neutralino, one of many particles the Large Hadron Collider (LHC) is looking for. Neutralinos are one of many particles that could make up the missing dark matter in the universe. Just like the hypothetical particle it is named after, the fluffy toy has been zipping through space, accompanying Fuglesang on board the space shuttle Discovery on mission STS-128.

“The neutralino is a symbol of the link between particle physics and the science of the universe,” says CERN director general Rolf Heuer. “Neutralinos are theoretical particles that the LHC will be looking for, and if they exist, they’re strong candidates for the universe’s dark matter.”

Today, the space-traveling neutralino from the Particle Zoo toy range is back at CERN. At a seminar on 24 May, Fuglesang, who is in charge of ESA’s scientific programme on board the International Space Station, gave a detailed overview of current experiments: ALTEA uses silicon-strip detectors to measure ion flux in the station; ACES (Atomic Clock Ensemble in Space) will provide unprecedented global time accuracy and test Einstein’s general theory of relativity; and SpaceQUEST, which proposes to test Bell inequalities for distances over 1000 km and a possible "decoherence" effect due to gravity.

During his 2-day stay, Fuglesang visited the ATLAS visitor centre, the CERN control centre and the AMS control room. He also gave a talk at the Lycée International de Ferney-Voltaire. “I was very happy to once again enjoy CERN’s nice atmosphere,” he says just before leaving CERN. “You can breathe science everywhere here! I would be very happy to have the opportunity to come back to CERN and - who knows? - to be able to carry out a common research programme here. I've discussed the possibility of joint ESA-CERN activities with the CERN Management with a view to strengthening the relationship between the two organizations.”

Taking CERN and ESA technology to the world’s...