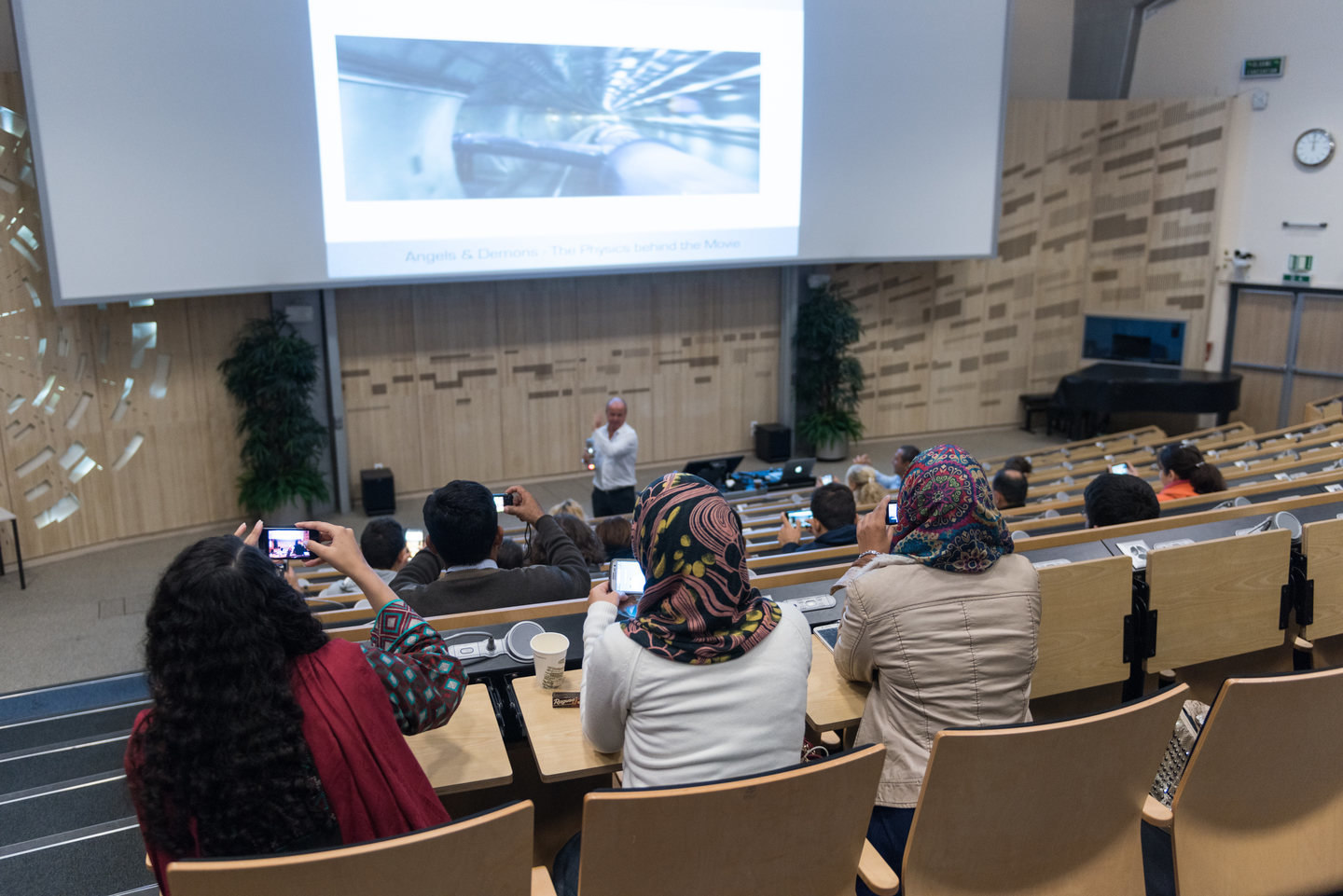 Students and teachers participate in lectures about CERN science at the first ever SESAME teacher and students school [Image: Sophia Bennett/CERN]

In September CERN welcomed 28 visitors from the Middle East for the first ever student and teacher school for SESAME.

SESAME is a third-generation synchrotron light source nearing completion in Jordan that will allow researchers from the region to investigate questions from a broad range of subjects, including the natural sciences, archeology and the arts.

SESAME is a unique joint venture that brings together scientists from its members: Bahrain, Cyprus, Egypt, Iran, Israel, Jordan, Pakistan, the Palestinian Authority and Turkey.

The week-long programme gave students and teachers from the region the opportunity to see international collaboration in science in practice at CERN.

The visit was set up to help stimulate networking between schools from SESAME members.

This means for many of the participants this is not only their first time abroad but their first time encountering people from neighbouring states. The goal of the school is to inspire collaboration and relationships at personal, as well as educational and scientific, levels.

“We want the schools from all of these different places to form a network, and to promote dialogue across this region (where dialogue between states isn’t all that common). All of the students and teachers are very open and happy to do that,” says Rolf Landua, CERN’s Head of CERN Education group and the project’s lead organiser.

In turn, the students and teachers are asked that, now they have returned home, they will continue to network with each other and share their knowledge of SESAME more widely, promoting the idea of science for peace with other schools in their region.

“A main goal when CERN was founded was to promote international collaboration. Looking at the Middle-East region today this is more needed than ever,” Landua says. “Today there are parallels to be drawn, with SESAME  -- everyone wants to see it come to life, and promote collaboration across the region.”

“Coming from the Middle East there are lots of opportunities for theoretical physics, but not many for experimental physics. SESAME is our ticket to do that here, at home” says one of the students on the programme who attends school in Jordan.

The students and teachers spent the week touring CERN, in lectures about CERN science and SESAME’s origin and goals, and also participating in social activities -- including a treasure hunt around Geneva. They also had the chance to video conference with people working at SESAME, and had presentations about the importance of diversity at CERN and social media in collaboration.

While the primary aim is to foster relations between schools, it’s also hoped that the visit will inspire the teachers to bring modern physics to the classroom and the students to continue to study science.

Inside Story: Behind the scenes of the high-s...