Coding has no gender 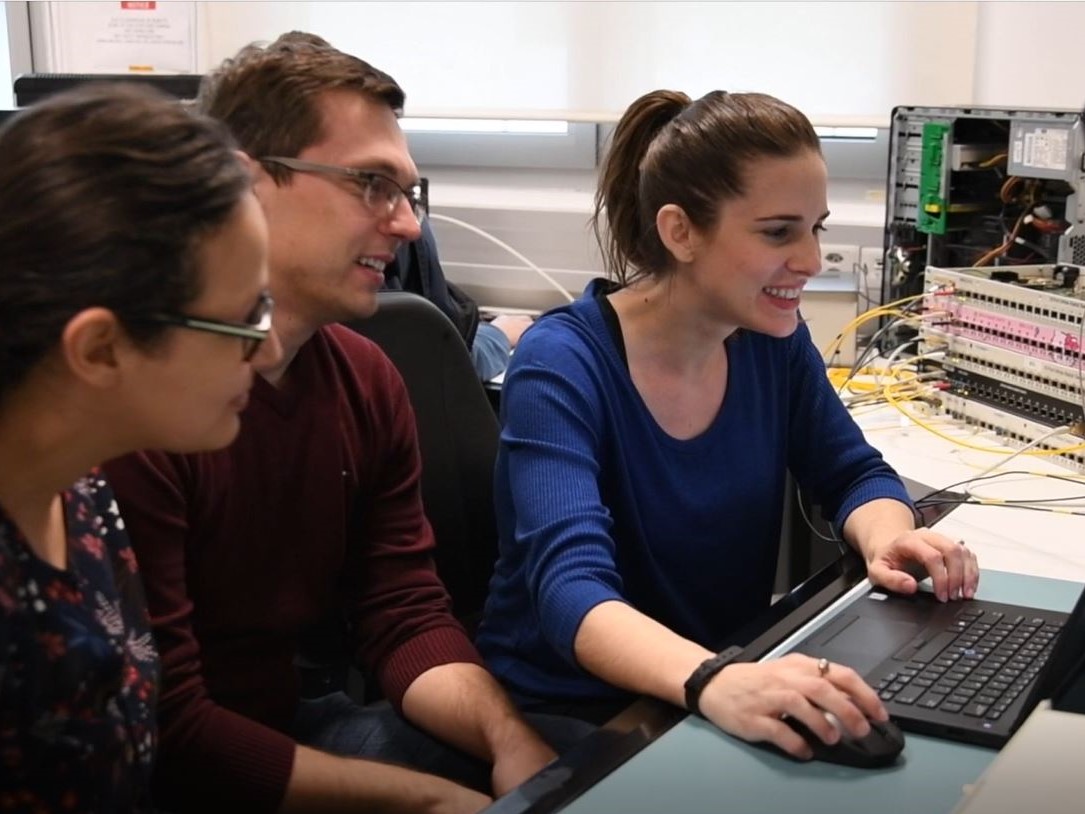 Evangelia Gousiou (right): “I would recommend engineering professions for their intellectual challenge and the empowerment that they bring.” (Image: Jacques Fichet/CERN)

With 11 February marking the International Day of Women and Girls in Science, female physicists, engineers and computer scientists from CERN and from Fermilab share their experiences of building a career in science.

Jeny Teheran: “What I love the most is to work with teams around the world.”

Jeny Teheran is a security analyst and cybersecurity researcher at Fermi National Accelerator Laboratory. That means keeping up with and taking care of hardware and software vulnerabilities so that the experiments can carry out their science in a secure manner. It’s a fast-paced job where you have to come up with the best solution you can put in place, right in the moment.

“I would recommend this job because it challenges you. It pushes you to be on top of your game. You have to improve your analytical skills; you have to react fast; you have to communicate better.” – Jeny Teheran

Jeny came to Fermilab from the Caribbean coast of Colombia. She grew up in a house with few toys but lots of books, and says she has always felt close to science. With a degree in systems and computing engineering, she arrived at Fermilab four years ago as an intern to work in the offline production team for neutrino experiments. A year later, she was hired as a security analyst. “And I’m loving it,” she says.

Evangelia Gousiou: “Nothing beats the rush you get when something that you designed works for the first time.”

Electronics engineer, Evangelia Gousiou, began her career studying IT and Electronics in Athens, Greece, before beginning an internship at a manufacturing plant in Thailand. She came to CERN for a one-year position, and now, ten years later is still at CERN enjoying a job that is never boring.

“Work is never repetitive, which makes it very rewarding. I usually follow a project through all its stages from conception of the architecture, to the coding and the delivery to the users of a product that I have built to be useful for them. So I see the full picture and that keeps me engaged.” - Evangelia Gousiou

For Evangelia, to be a good electronics engineer means knowing a range of disciplines, from software to mechanics. There is also the human aspect, as she works daily with people from many different cultures.

At school, her favourite subjects were maths and physics, as she enjoyed finding out how things worked, yet Evangelia never dreamt of being an engineer when she grew up. When the time came to choose what to study, she felt that engineering would be something interesting and future-proof, and then she got hooked and now can’t imagine doing anything else. “I would recommend engineering professions for their intellectual challenge and the empowerment that they bring,” she beams.

Margherita Vittone-Wiersma: “You feel connected with the research.”

Margherita Vittone-Wiersma came to Fermilab as a physicist in February 1985. Together with a group of researchers from Italy’s Institute of Nuclear Physics, she began a new experiment called E 687. But she soon learned that she preferred working on data acquisition and the many methods to store and access the huge amount of data coming out of science experiments. What was once mere megabytes of data is now terabytes of information – and experimental physicists need to be able to retrieve stored data and monitor data coming from the detectors in real-time.

It’s been an incredible change in scale of the amount of data that is handled by computers and has to be analyzed by the physicists. – Margherita Vittone-Wiersma

Margherita migrated from physics to her new role in computing through lots of hands-on learning and classes in different programming languages and software development offered at Fermilab. She officially joined the lab’s computing division in 1989. “It’s a great experience to work with the physicists,” she says. Together physicists and computing experts iterate over tools “to make sure that everything is working the way they expect. It’s very rewarding.”

Sofia Vallecorsa: “Technology is part of society, so learning computing can be empowering”

Italian physicist Sofia Vallecorsa always knew that she wanted to study science. Her mother was a physicist and her father a mathematician, so it felt natural to her to choose a physics degree. During her studies she saw computing simply as a tool, but as time went on her love for computing grew. Computing was interesting because it was challenging.

“Coding reminded me of being a kid playing with a challenging problem. It felt so rewarding when I found the solution.” - Sofia Vallecorsa

After her studies she moved into computing and now works in the CERN physics department providing software tools for the experimental physicists. Coming to computing via a different background, meant making more effort to learn things for herself. But this taught her to face challenges one step at a time to reach her goal. “I use a lot of machine-learning in my work and this was something that I had to learn from scratch. Yet it is so interesting and important to many fields and has really expanded my horizons to work with experts outside of particle physics,” she exclaims.

Krista Majewski came to Fermilab nine years ago as a software developer and now works in an operations role. She is a computing services specialist and part of the grid and cloud operations group, which manages computing clusters for the CMS experiment and other intensity frontier experiments at the lab.

“My typical day would be maintaining the services that our group is responsible for and the machines that they run on. So if there are problems with a computing cluster where a user can’t run their jobs, or they’re trying to run on resources on the grid and they’re unable to, then our group would be responsible for helping debug some of those issues.” – Krista Majewski

Her path to programming at Fermilab has been winding. After receiving a degree in biomedical engineering, she worked in web development and programming for a large consulting firm, then moved to the financial industry. But programming called her back, and she earned a master’s degree in computer science to start her new career.

For Krista, programming is similar to something she enjoyed as child: solving puzzles. “I think it’s a skill that you use in a lot of different ways,” she says.