The second CERN Network Hub, inaugurated on 19 July 2017, will ensure continuity of IT services in case of a major incident in the CERN data centre 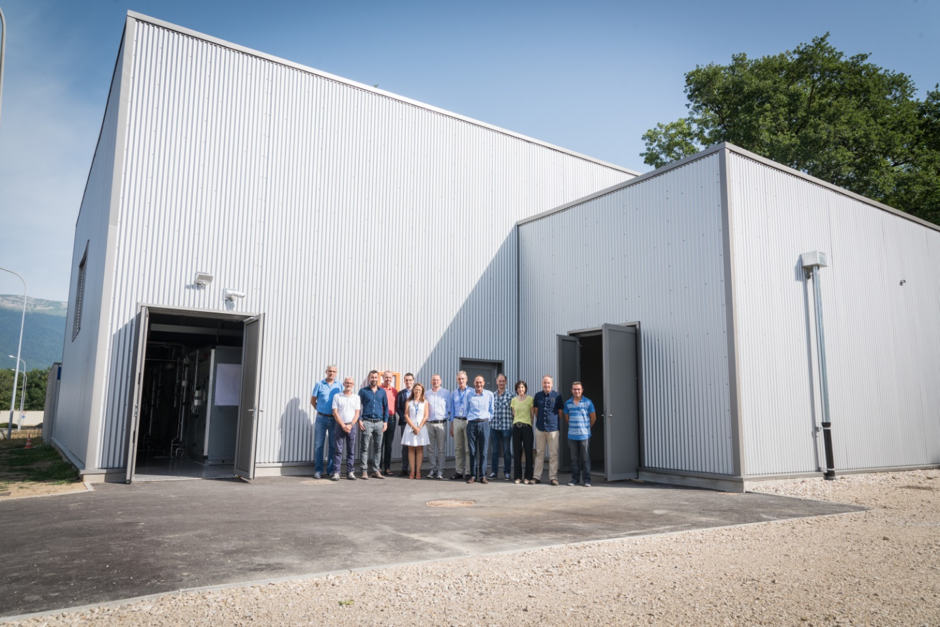 The second CERN network hub, located near the CERN Control Centre in Prévessin, was inaugurated on 19 July 2017 (Image: Sophia Bennett/CERN)

The day-to-day operation of CERN is heavily reliant on IT services and preventing their potential long-term interruption is hence crucial. To this end, a project to create a second network hub was approved in 2014 and, three years later, building 773 has been handed over to the IT and EN departments. Its inauguration took place on 19 July 2017 in the presence of the CERN Director-General Fabiola Gianotti, the Director for Research and Computing Eckhard Elsen, the Engineering department head Roberto Losito, the Information Technology department head Frédéric Hemmer as well as many of the people involved in the project. Located close to the CERN Control Centre in Prévessin, the building houses a computing room for IT equipment, a storage room, a fibre room operated by EN/EL, and a main cooling room relying on cost effective and very energy efficient technologies. Building 924 close by provides additional technical rooms such as electrical rooms as well as a cooling room.

Internal and external network communications are essential for CERN – imagine a day without access to email or the web! – and used to rely heavily on equipment and fibre concentrated in building 513.

This second network hub, with fibre connectivity to the outside world, the CERN data centre and its extension in the Wigner Research Centre for Physics in Hungary, the CERN Control Centre, as well as all the major star-points, provides redundancy for the CERN data network. Henceforth, should there be any major incident in the CERN data centre, CERN network connections will continue to work. This project required extensive work, planning and coordination: many thanks to all the departments and services that contributed to its completion!