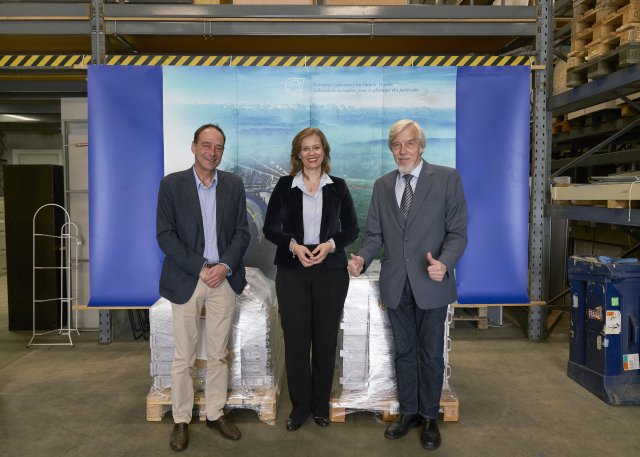 Left to right: CERN’s Head of IT, Frédéric Hemmer, and Director for International Relations, Charlotte Warakaulle, with President of the SESAME Council, Rolf Heuer, and the servers donated by CERN to SESAME packed and ready to go. (Image: Max Brice/CERN)

On 12 September, 56 servers left CERN bound for the SESAME laboratory in Jordan. SESAME, like CERN is an intergovernmental research organisation, and the two laboratories have a long-standing relationship. SESAME is based on the CERN model, though its area of research is very different. A third generation light source currently in its start-up phase, SESAME will explore disciplines ranging from medicine and biology, through materials science, physics and chemistry to healthcare, the environment, agriculture and archaeology. SESAME’s eight members are Cyprus, Egypt, Iran, Israel, Jordan, Pakistan, the Palestinian Authority, and Turkey.

Once at SESAME, the servers donated by CERN will be installed in the laboratory’s data centre, where they will handle data from experiments soon to be coming on line. “These servers are a very valuable addition to the SESAME data centre,” said Salman Matalgah, Head of IT at SESAME. “They will help ensure that we’re able to provide first-class computing support to our users.” Speaking for CERN, Charlotte Warakaulle, Director for International Relations said: “This donation continues the long-standing CERN support for SESAME. After many other successful donations, it’s great that we can extend the list of beneficiaries to include SESAME: a truly inspiring project showcasing and building on scientific capacity in the Middle East and neighbouring regions.” CERN contributed to the construction of the SESAME main ring through the EU-funded CESSAMag project, and is currently involved in another EU-supported project, Open SESAME, which is providing valuable training experience to SESAME personnel. Previous donations of IT equipment from CERN in 2017 were made to Algeria in February and to Bulgaria in August.