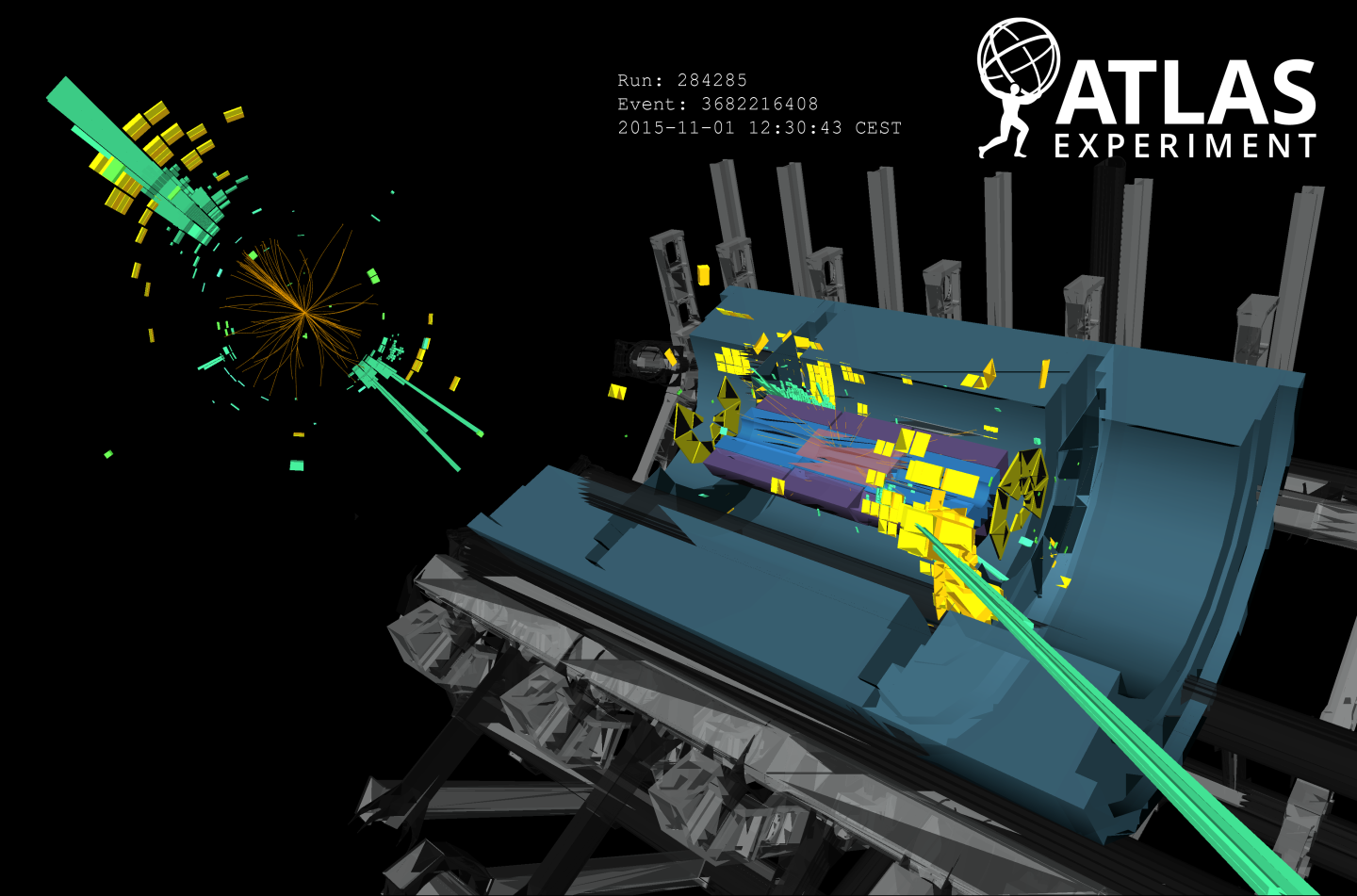 Event display of a tt̄ event candidate in the 2015 data (Image: ATLAS/CERN)

In their hunt for new particles and phenomena lurking in LHC collisions, the ATLAS and CMS experiments have joined forces to investigate the top quark. As the heaviest of all elementary particles, weighing almost as much as an atom of gold, the top quark is less well understood than its lighter siblings. With the promise of finding new physics hidden amongst the top quark’s antics, ATLAS and CMS have combined their top-quark data for the first time.

There were already hints that the top quark didn’t play by the rules in data collected at the Tevatron collider at Fermilab in the US (the same laboratory that discovered the particle in 1995). Around a decade ago, researchers found that, when produced in pairs from the Tevatron’s proton-antiproton collisions, top quarks tended to be emitted in the direction of the proton beam, while anti-tops aligned in the direction of the antiproton beam. A small forward-backward asymmetry is predicted by the Standard Model, but the data showed the measured asymmetry to be tantalisingly bigger than expected, potentially showing that new particles or forces are influencing top-quark pair production.

“As physicists, when we see something like this, we get excited,” says ATLAS researcher Frederic Deliot. If the asymmetry is much larger than predicted, it means “there could be lots of new physics to discover.”

The forward-backward asymmetry measured at the Tevatron cannot be seen at the LHC because the LHC collides protons with protons, not antiprotons. But a related charge asymmetry, which causes top quarks to be produced preferentially in the centre of the LHC’s collisions, can be measured. The Standard Model predicts the effect to be small (around 1%) but, as with the forward-backward asymmetry, it could be made larger by new physics. The ATLAS and CMS experiments both measured the asymmetry by studying differences in the angular distributions of top quarks and antiquarks produced at the LHC at energies of 7 and 8 TeV.

Alas, individually and combined, their results show no deviation from the latest Standard Model calculations. These calculations have in fact recently been improved, and show that the predicted asymmetry is slightly higher than previously thought. This, along with improvements in data analysis, even brings the earlier Tevatron result into line with the Standard Model.

ATLAS and CMS will continue to subject the heavyweight top quark to tests at energies of 13 TeV to see if it deviates from its expected behaviour, including precision measurements of its mass and interactions with other Standard Model particles. But measuring the asymmetry will get even tougher, because the effect is predicted be half as big at a higher energy. “It’s going to be difficult,” says Deliot. “It will be possible to explore using the improved statistics at higher energy, but it is clear that the space for new physics has been severely restricted.”

The successful combination of the charge-asymmetry measurements was achieved within the LHC top-quark physics working group, where scientists from ATLAS and CMS and theory experts work together intensively towards improving the interplay between theory and the two experiments, explains CMS collaborator Thorsten Chwalek. "Although the combination of ATLAS and CMS charge asymmetry results didn't reveal any hints of new physics, the exercise of understanding all the correlations between the measurements was very important and paved the way for future ATLAS+CMS combinations in the top-quark sector.”