At the beginning of March, the CMS collaboration installed an important part of its detector: its second-generation Pixel Tracker 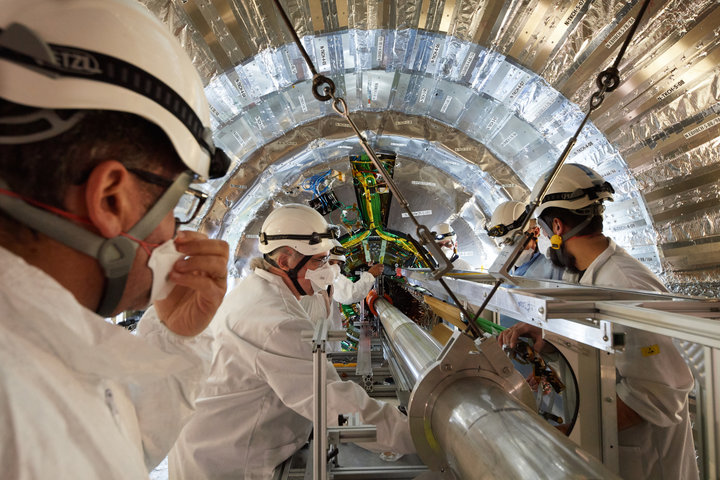 Delicate surgery: The new Pixel Tracker being installed at the heart of the CMS detector. (Photo: Max Brice/CERN)

At the beginning of March, the CMS collaboration successfully replaced part of the heart of its detector: its silicon pixel tracking system. This system, a 4-layer cylindrical device with 124 million pixels, is the innermost part of the CMS detector and starts the trajectory measurement of charged particles emerging from proton-proton collisions at the centre of the experiment.

The original Pixel Tracker was designed for a lower collision rate than the LHC will deliver in the coming years. Therefore, between 28 February and 7 March, it has been replaced with a brand-new device, as one of the activities of the Extended Year-End Technical Stop (EYETS). In fact, the Pixel Tracker’s upgrade is the schedule driver for the overall CERN EYETS planning and its successful installation is another important milestone in a busy but productive period for the collaboration.

The older Pixel Tracker had three layers in the central barrel region (called BPIX), capped by two disks at each end (named FPIX). Its replacement, which has an additional layer throughout, is primarily designed to help CMS deal with the increasing rate of collisions. These additional layers of tracking will also help CMS better establish where the individual collisions occurred and better trace the trajectories of produced particles. This enhanced performance will improve the precision with which predictions of the Standard Model can be measured, including the theorised properties of the Higgs boson.

Preparations for the installation of the second-generation Pixel Tracker began as early as Long Shutdown 1 (LS1). The innermost layer of the new BPIX is intended to sit even closer to the collision point than before. To accommodate this configuration, the central section of the LHC beam pipe was replaced during LS1 with a narrower version. Earlier this year, the original Pixel Tracker was removed from within CMS and stored in a radiation-protection environment on the surface at Point 5.

On Tuesday, 28 February, one half of the new BPIX was installed around the beam pipe. The BPIX was built by a consortium of nine laboratories in Europe, and finally assembled at PSI in Switzerland. The BPIX had been transported to CERN a few weeks previously and stored in a clean room on the surface at Point 5 prior to installation. On the Tuesday morning, the first of the two halves was lowered through the 100-metre-deep shaft onto the floor of the CMS underground experimental cavern before being raised onto the operational platform and inserted into position; it was followed by the second half on Thursday, 2 March. Once each half was in place, the respective electronics and cooling systems had to be connected in preparation for data taking. The remaining components – the FPIX consisting of three disks on each side of the collision point, built in the US – were installed at the beginning of March.

The upgraded Pixel Tracker will operate until the early stages of the High-Luminosity LHC, when a third-generation device will replace it.