Cosmic collisions at the LHCb experiment

What happens when protons in cosmic rays collide with helium nuclei? The LHCb experiment is on the case 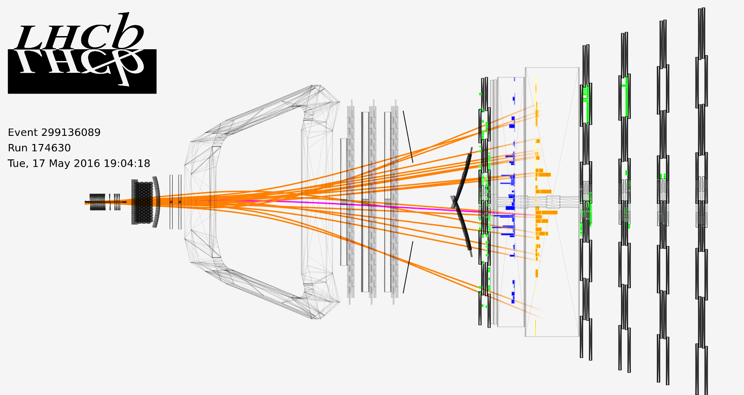 An example of a fully reconstructed proton-helium collision event in the LHCb detector. The particle identified as an antiproton is shown in pink. (Image: LHCb collaboration)

Last week at the 52nd Rencontres de Moriond EW in La Thuile, Italy, the LHCb experiment presented the results of an unprecedented and unusual study. Instead of the usual proton-proton collisions, this time the LHCb detector registered collisions between protons and helium nuclei, which were injected near the interaction point of the experiment. This type of collision can usually only be seen far above the Earth’s atmosphere, where cosmic-ray particles – highly energetic particles from outside the Solar System – hit interstellar “dust” primarily made up of hydrogen and helium, and are detected by satellite-based experiments. Scientists want to better understand this process and, in particular, are trying to understand how many antiprotons are created when the highly-energetic cosmic-ray protons hit the helium nuclei of the interstellar medium.

The ultimate reason for this relates to the search for dark matter signals. Dark matter is an invisible type of matter – i.e. it doesn’t emit any type of electromagnetic radiation – which makes up one quarter of the matter-energy content of our universe, but its origin is as yet unknown. If dark matter is made of some kind of (as yet undiscovered) stable particles, whose existence is foreseen in many extensions of the Standard Model of particle physics, these dark matter particles might collide and produce ordinary particles and antiparticles, notably including antiprotons.

However, antiprotons can also be created via the collision of cosmic-ray protons with hydrogen and helium nuclei in the interstellar medium. Therefore, a potential sign of the presence of dark matter could be the observation of a number of antiprotons exceeding that expected from “standard” processes. And indeed, the PAMELA and AMS-02 space-based experiments found exactly such an intriguing excess of antiprotons compared to protons in cosmic-ray measurements, with an impressive level of precision.

Eureka? Unfortunately not yet, as our theoretical understanding of antiproton production from cosmic-ray collisions is still affected by large uncertainties, especially regarding the probability of antiproton production in proton-helium collisions (the so-called “cross-section”). A precise determination of the expected number of antiprotons from cosmic rays has been impossible so far, thus preventing a straightforward interpretation of the satellite experiments’ results.

Here is where the LHCb experiment came in. The idea of injecting noble gasses – such as neon, helium and argon – into the beam pipe near the interaction region was proposed for various reasons related to proton-beam luminosity measurements. But its potential was quickly recognised by the LHCb physicists and their colleagues working in astroparticle physics: the gas-injection technique could also be used to simulate the cosmic environment and measure, for the first time, the production cross-section of antiprotons in proton-helium collisions.

The proton-helium collision data used in this analysis were recorded in early May 2016. Thanks to its specialised capabilities in identifying various particles, in particular antiprotons, the LHCb experiment was also able to measure the antiproton production cross-section in a large range of relevant energies, achieving an overall precision of around 10%. This measurement significantly shrinks the uncertainty on the values of the antimatter production cross-section in proton-helium collisions that have been used so far in theoretical cosmic-ray models (see the image below).

The LHCb result will have a considerable impact on the predictions for the number of antiprotons expected from cosmic-ray collisions with the interstellar medium, and the astrophysics community is now busy incorporating it into their calculations. This work will enable the interpretation of PAMELA and AMS-02 data on the antiproton flux from space to become more constrained, shedding light on its possible dark-matter origin.

More information on this result can be found on the LHCb website.